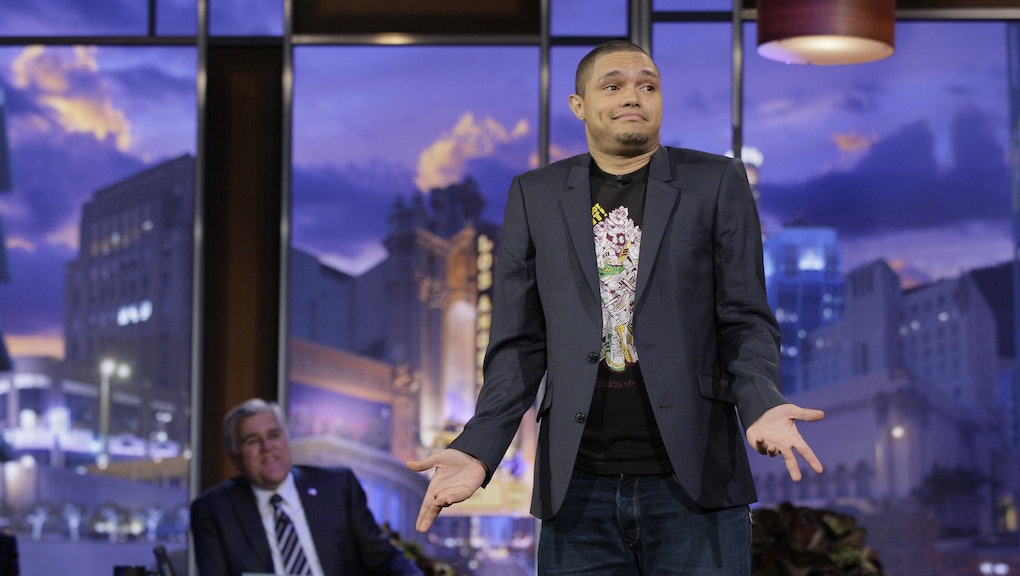 We are in Day Three of Trevor Noah's Tweetghazi scandal, and the new Daily Show host is standing his ground. Instead of apologizing for a selection of tweets from his past that raised eyebrows late Monday night, Noah mounted a defense of himself and his "evolution as a comedian."

He did this with the support of Comedy Central, though the network might be wishing they had chosen a better-known name at this point. Whether or not these tweets, zinging everyone from Jewish people to women of all sizes, should have blown up so hugely is irrelevant now. This is officially a big deal.

By not offering any manner of apology, a defensible move for a comedian albeit a bad one from a PR perspective, Noah has made sure this incident isn't going away any time soon. Yet the real lesson here isn't to apologize for jokes, nor is it for networks to vet their late-night hosts better before announcing their hiring.

The true lesson is that Twitter is permanent, and it is a very bad place for trying out jokes.

This shouldn't come as a surprise. Twitter is permanent, and it is public. Yet for many comedians, it's also a place to test jokes — a stand-up routine at a club that's always open. But as Tim Goodman pointed out at the Hollywood Reporter, whether or not that was true once, it's certainly not true now.

"Jokes on Twitter are different because the Twitter crowd is an entirely different animal from a comedy club crowd — more prone to offense and outrage," Goodman argued. The two realms couldn't be more different: One crowd goes to have their point of view affirmed, while another wants to be pushed outside their realm. He continued:

"Live comedy in a club, especially with comics you might not be familiar with, is the polar opposite of the preach-to-the-choir, choose-whom-you-follow nature of Twitter. Once comedians bring their club work to the more easily affronted world of Twitter, the backlash can be savage. It's why I don't think Twitter is an ideal forum at all for comics, even though almost all of them use it and can't resist the allure of building up their fan base and trying material on the service."

It's possible that when Trevor Noah first sent those tweets in 2010-2012, Twitter was more like a casual comedy club, perfect for trying out new material to a test audience. So Noah's consideration of the potentially offensive tweets as "a handful of jokes that didn't land" probably feels like an accurate description to him. The problem is that he's not considering the evolution of Twitter since. If he's going to reach the audience that expects him to be penitent for his past, he needs to quickly figure out how to straddle the line of unapologetic and, as he put it, evolved.

A word of advice for Noah: Heed Jon Stewart's example. Stay off Twitter entirely. That was the take Daily Show correspondent Aasif Mandvi offered to the Hollywood Reporter yesterday evening.

"He also doesn't need to be on social media. ... Once Trevor Noah takes the chair of The Daily Show, he's going to have a huge platform to say all kinds of things that he wants to say," Mandvi said. "Jon Stewart actually said once, 'I don't need to be on Twitter or Facebook because I'm on television four nights a week.'"

Mandvi's advice is extreme — quite frankly, a young host building himself up from no prior awareness probably should be on Twitter. But there's a kernel of truth here: Noah doesn't need Twitter to test out material anymore. He'll have a team of writers and a network support staff for that. He should stick to pre-screened material (like Ellen DeGeneres does on her account) to achieve best effect.

There's still the question of why, while vetting him, Comedy Central didn't ask Noah to delete tweets they were concerned might be offensive. From a network that seems to understand PR, that was a rookie move. Unfortunately, that ship has more or less sailed. Deleting the tweets now would look like trying to cover up his past. Quite frankly, Noah and Comedy Central's only move is to wait out the storm and learn from it.

This shouldn't be surprising: Twitter is permanent, and it is public.

This is a universal lesson. Whether you're Justine Sacco or Trevor Noah, what's put online is an extension of you. Everyone tells bad jokes, but there's no reason to keep them up to haunt you later in life. This is a lesson repeated ad nauseam, yet more cautionary tales pop up every year.

Noah still shouldn't be judged for his past jokes, and he certainly should still get his shot at hosting The Daily Show. That said, he needs to learn to be savvier about his image fast: This is not the world Jon Stewart lived in when he started hosting the show 16 years ago. If Noah can't adapt, Comedy Central will be on the lookout for the next new Jon Stewart in no time.