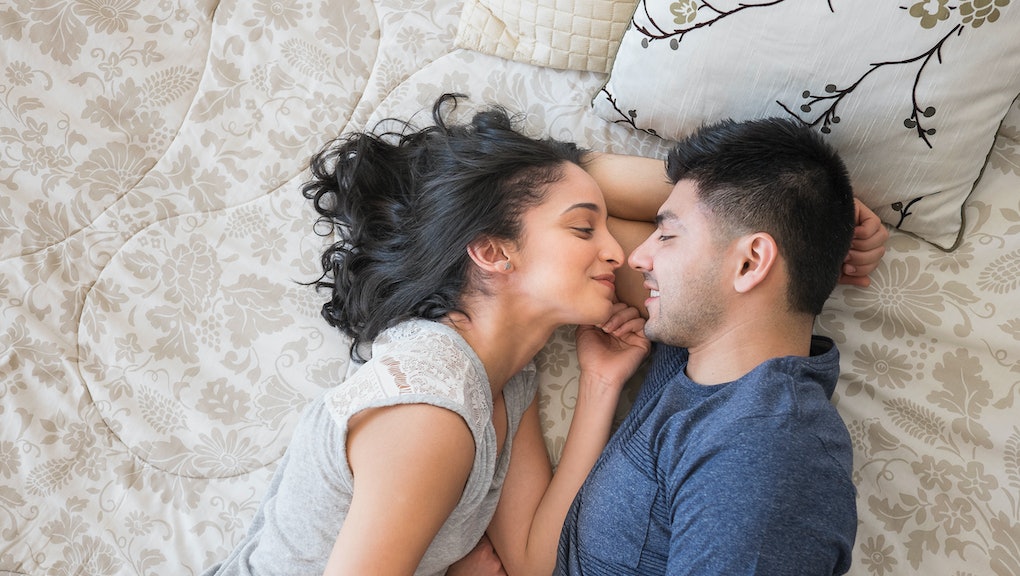 The People Having the Most Sex Are Not Who You Think

Who's having the most sex?

For all that we bemoan the death of sex in long-term relationships, or blame the widespread scourge that is millennial hookup culture, the group actually having sex most often might surprise you: couples.

The facts: The recently released Lesbian Sex Survey from queer women-focused site Autostraddle asked 8,566 women who have sex with women, the majority of whom were 18 to 36, about their bedroom habits. The results showed that 35.6% of queer women in monogamous relationships and 35.54% in non-monogamous relationships have sex multiple times a week.

As for the single ladies, just 12.24% had sex multiple times a week. Nearly half of surveyed singles have sex less than once a month. Only 8.8% of those in monogamous relationships had sex that infrequently.

As it turns out, the same holds true for straight couples. According to data from the Kinsey Institute, 28.7% of women ages 25 to 29 in relationships have sex two to three times a week, while only 1.3% of single women have sex that frequently. A similar pattern held for single and partnered straight men. Across the board, couples are having more sex than those supposed swingin' singles.

But which couples, exactly?

But there's a catch: While couples are having more sex overall, Autostraddle notes that the biggest predictor of how much sex you have was "not age, it's not desire, it's not how many partners you've had or when you lost your virginity — it's how long you've been in the relationship that you're in."

Drop-offs are common across the board, something we know anecdotally. Data also bears it out, especially for women: A 2012 study of undergraduates found that "for each additional month women in this study were in a relationship with their partner, their sexual desire decreased by 0.02 on the Female Sexual Function Index." And according to older data cited by the Science of Relationships, after 10 years or more of a relationship, only 11% of homosexual male couples and 18% of heterosexual couples have sex three times or more a week — much lower than the beginning stats of their relationship.

If there's one demographic that is bound to get busy, it's not singles or long-married couples. It's the couples enjoying the excitement of a new relationship. There's a reason they call the early months of a fling the "honeymoon period."

The magic of new love: What's so invigorating, and arousing, about the honeymoon period? Spencer James, a social science researcher who studies honeymoon periods in marriage, told the Huffington Post in December that the beginning of the relationship is "when social and community support are at their peaks."

It's also the period in time when many couples aren't yet living together, with planned sleepovers adding to the expectation of sexual encounters. Most importantly, it's often when couples actually have the time and attention, before the demands of jobs, technological distractions and parenting stress can get in the way.

"Often it's hard to find the time, period, and it's just easier to prioritize constant sex over everything else in your life when you've just started seeing somebody," Autostraddle reports.

It's about what's right for you: No matter what your relationship status, what really matters is sexual satisfaction, however and whenever you manage to achieve it. "Great sex is about a lot more than frequency, and sexual satisfaction is determined by a lot of variables other than frequency," Kristen Mark, assistant professor and director of the Sexual Health Promotion Lab at the University of Kentucky, previously told Mic.

The "right" amount of sex is different from every couple to each individual. All the new data proves, perhaps, is what we knew all along: A happy, excited relationship means great things for your sex life. It's just about keeping that "honeymoon" happiness for as long as possible.