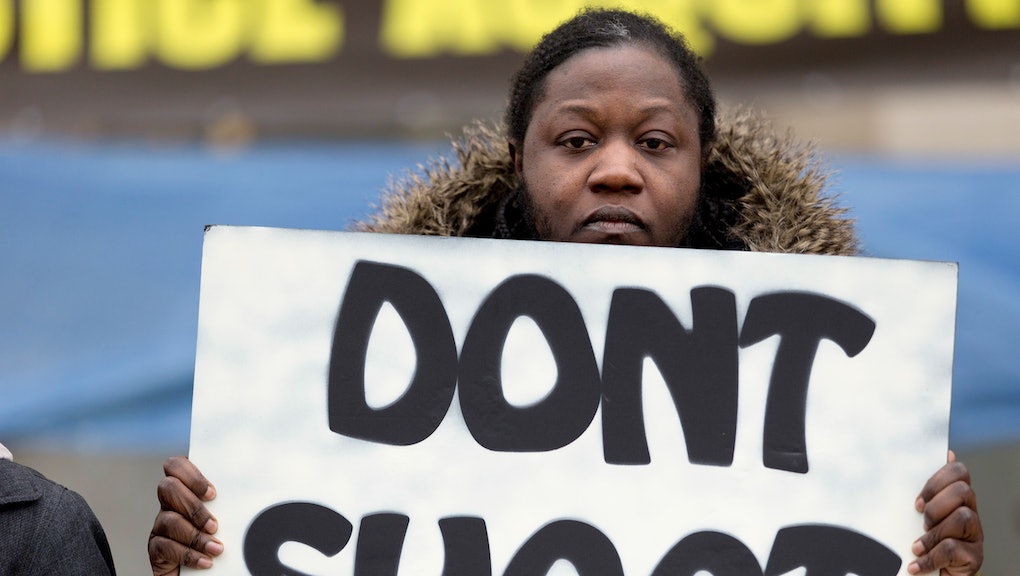 Police in the U.S. Shot and Killed 115 People in the Month of March Alone

Police across the United States killed a staggering 115 people in the month of March, according to media reports compiled by KilledByPolice.net.

All told, Killed by Police reports that 2015 has seen almost 300 police killings as of April 2, a number dramatically higher than the woefully incomplete statistics from the FBI.

Just by themselves, these numbers are alarming, but let's compare them to other countries for a bit of perspective.

That 295 figure is nearly six times higher than the entire number of people killed by police in the United Kingdom since the year 1900, which Shaun King on Daily Kos tallies at just 52.

That means American police shoot approximately 46 times as many people as their German counterparts.

KilledByPolice's numbers put U.S. police on track to kill three or four people a day. To be fair, that's less than the wildly corrupt Brazil, where police kill about six every day. When it comes to police killings, the U.S. has some very bad neighbors.

Why it's happening: Police training and equipment plays a major role. As the Washington Post's Rick Noack points out, in Ireland, Britain, New Zealand and Norway, police don't carry firearms on normal duty, while German police are extensively trained to only reach for their firearms as an absolute last resort.

In contrast, increasingly militaristic police tactics in the U.S. have led to increasing use of heavy-handed techniques like SWAT team deployments and no-knock raids. According to the ACLU, average SWAT deployments rose from roughly 3,000 annually in the 1980s to 45,000 per year in the mid-2000s, mostly for drug raids.

But even average police officers seem quick to use force. In an interview with NPR, former Madison, Wisconsin, police chief David C. Couper attributed this to a mentality of "domination and control" rather than "through negotiation, through kind of scaling things down without heightening the anxiety of the situation."

The Economist suggests that part of the problem has to do with widespread access to firearms across the country, and it goes both ways. In 2013, 30 American police officers were murdered with firearms, making police murders relatively common in the United States compared to countries, like Japan, where such violence is a rarity.

"Add to that a hyper-militarized police culture and a deep history of racial strife and you have the reason why so many civilians are shot by police officers," the Economist writes. "Unless America can either reduce its colossal gun ownership rates or fix its deep social problems, shootings of civilians by police — justified or not — seem sure to continue."

Why you should care: The U.S. is supposedly a free country, where citizens enjoy extensive rights and protections against the abuse of authority by law enforcement. But statistically, American police are killing many times more people than cops in other industrialized countries. Those killed tend to be minorities or the mentally ill.

A popular perception of police as simply not caring about the people they're supposed to protect has seriously eroded the public's trust in law enforcement, with a recent Reuters/Ipsos poll finding that 31% of Americans now believe that "police officers routinely lie to serve their own interests." Among African-Americans, the number jumps to 45%.

This shouldn't be an acceptable way for police to act in a democracy. But the reality is that it is, as far as American police are concerned.