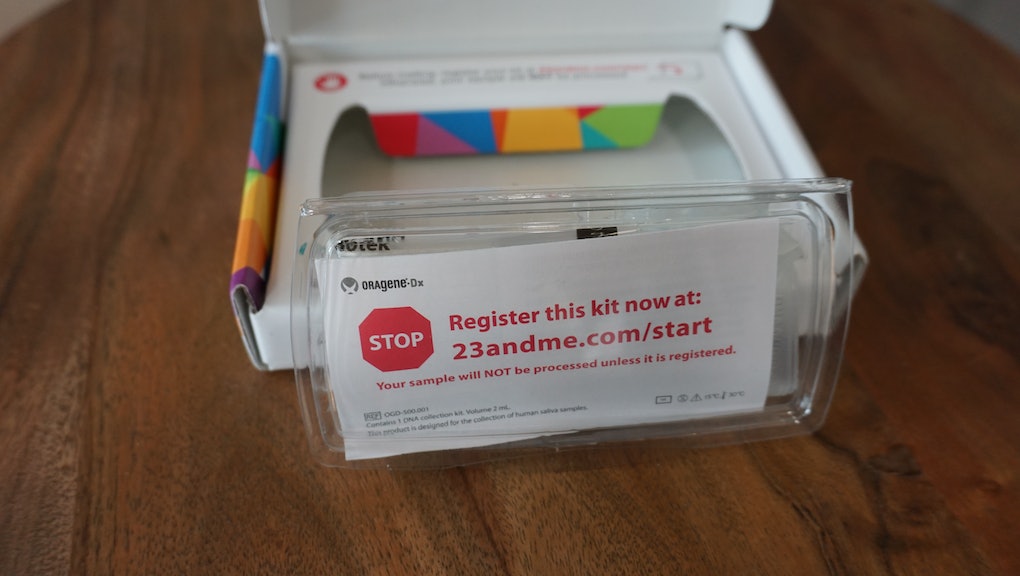 I Got My Genes Tested by 23andMe, and Here's What I Learned About My Future

One day in late November, I stood in the bathroom of my workplace, continuously depositing my saliva into a slim, plastic tube while my boss cheered me on.

No, I wasn't on set at some sort of weird snuff film: I was the resident guinea pig for 23andMe, the at-home genetic testing service led by Anne Wojcicki. For $199, the company promises to send customers a detailed report on their ancestry, carrier status, traits and wellness. All you have to do is order a kit, register it online and send back the company-provided tube with the requisite amount of saliva inside. (It took me roughly seven minutes to produce enough spit. It's harder than you might think.)

After filling up my tube, I screwed the cap back on and tucked it into a small, brightly patterned cardboard shipping box. After I accidentally carried it around for four days because I forgot about it — could 23andMe tell me why I can never remember to complete normal, mundane tasks? — I dropped it in a mailbox one night in December.

"Here goes nothing," I said to my friend.

Undeterred by the C-minus I'd gotten in a college anthropology class, I felt a bit like Indiana Jones, delving into history to unlock a few clues about my future and humanity itself. I wondered if, in understanding where I came from and the things that were floating around inside me, I could understand the bigger system a little bit better.

Last Sunday, after eight weeks and change, my results finally popped up in my inbox with a cheery automatic message: "Your reports are ready!" At the time, I was sitting at the kitchen table at my parents' house. My sister was sitting to my right, feeding my 18-month-old nephew chopped apples.

To my surprise, my family had been even more excited for my results than I was. My mother asked me regularly when they would be ready, and my father was eager to test out his theory that our family had a tiny bit of Jewish heritage buried within its folds.

Sitting at the table that morning, I opened up my reports — all 62 of them — and began to parse through the pretty, itemized lists of my own essential components. It was like watching all the parts of me — the genetic parts, anyway — come together to form a complete image.

Most of it, I'm sorry to say, wasn't much of a surprise. My report indicated that I'm 99.8% European — British, Irish, French, German, Scandinavian — which didn't come as a shock. The other 0.1% was more surprising: Sub-Saharan African and 0.1% East Asian, Native American and South Asian.

There were some fun treats, like finding out I probably don't have a photic sneeze reflex, or that I probably prefer salty and savory snacks to sweet ones. I also apparently have 290 genetic variants of Neanderthal origin, which is more than 70% of other 23andMe customers. Amusingly, I was told I was a "likely sprinter," which made my mother laugh almost as much as me.

I was told I was a "likely sprinter," which made my mother laugh almost as much as me.

The report did include one unpleasant surprise: I'm a carrier for PEX1-related Zellweger syndrome spectrum, a rare genetic disorder. Though there are a number of conditions underneath the ZSS umbrella, I have one variant in the PEX1 gene that is characterized by impaired hearing, vision and organ function, along with developmental disabilities and early death.

If I had both variants, I would have the condition. As it stands, I am a carrier, which means that although I don't have it, I have a 25% chance of passing it on to my future children if my partner were also a carrier.

I read the result with a start. I have a thing, I remember thinking, a thing that might affect someone other than me someday. I know the chances of passing it along are slim — it is rare, after all — but as a healthy woman of childbearing age, I still feel unsettled by the knowledge that my kids could inherit it.

It was like peeking into my parents' room as they wrapped Christmas gifts: I wasn't really supposed to know about these things in the first place, so it was strange to know how they came to be.

"I wouldn't want to know about any of that carrier status stuff," my mother told me when I confided the genetic disorder.

"Really?" I asked. "You wouldn't want to know, even if you could possibly pass it on to your kids?"

"The chances are low enough as it is," she replied, nonplussed. "I wouldn't want to know."

I considered it for a moment. I thought about the service itself — the cost, the quality of information, the ease with which you can discover all sorts of strange things about yourself — and wondered whether I'd do it again.

"You wouldn't want to know, even if you could possibly pass it on to your kids?"

In the end, my mind went back to — of all things — the concerns of the Food and Drug Administration, which had cautioned, before ultimately giving 23andMe the go-ahead, that giving people access to their own health and genetic information may lead them to make choices about their bodies they might not have ordinarily made.

This isn't to say that I'm going to make any major life decisions based upon the results of an online genetic testing service run by the sister of a big-time CEO. But it does mean that these bits and pieces of information will be floating around inside me for a long time — just like before, I suppose.