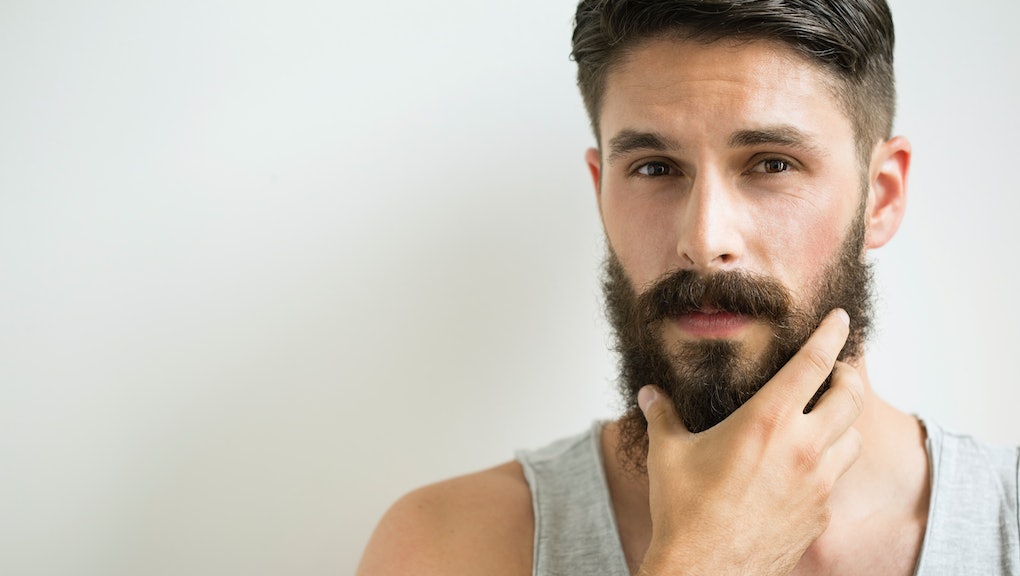 Have you been finding yourself among an ever-increasing group of bearded, tattooed and pierced men at the bar?

It's likely that the number of men sporting mustaches, septum rings and fresh ink is only going to grow, and there's an underlying reason why: A new study explains that today's hirsute, tatted men may have an advantage in the dating world.

The study: In a study published in Evolution and Human Behavior, researchers from the University of Western Australia analyzed 154 species of primates to see how they use physical "ornaments" and "badges" to stand out. The researchers found that male primates who live in larger, multilevel societies use flamboyant and conspicuous markers to signal "identity, rank, dominance or attractiveness" to females.

The researchers claim that it holds for humans too, with beards and tattoos being the badges men use to compete for attention. The tougher the competition and the bigger the dating pool (and online dating, as we know, has made it bigger than ever), the more ostentatious men have to get with their whiskers and piercings. These secondary sexual traits, or features that give us a sexual advantage, may amplify our mating (and dating) success.

"In large groups where individuals are surrounded by strangers, we need a quick, reliable tool to evaluate someone's strength and quality, and that's where these elaborate ornaments come in," lead researcher Cyril Grueter told the University of Western Australia's University News. "In the case of humans, this may also include phenotypic extensions such as body decoration, jewelry and prestige items."

That explains the trends: Our inclination towards this kind of "ornamentation" seems to be growing, as with the recent rise of the "hipster beard." A 2010 Pew Research Center survey found that nearly 4 in 10 millennials currently have a tattoo, and that nearly 1 in 4 millennials have a piercing in a place other than their earlobe.

Standing out has never been so popular, which may explain the recent men's fashion trends like colorful socks, funky pocket squares and men's jewelry.

Of course, the specific "badges" change as fashion trends change. The study authors also found that facial hair trends come in waves. "The popularity of mustaches and beards among British men from 1842 to 1971 rose when there were fewer females in the marriage pool and beards were judged to be more attractive," reported the Telegraph regarding the study.

When it comes to the beard effect, it works best when facial hair isn't the norm. One 2014 study found that the more common a beard is, the less value it has as a distinguishing and attractive trait. (Perhaps that's when escalation starts, like today's guys dyeing their beards in technicolor?)

Embracing your differences: Regardless of what's on-trend, individualizing yourself with clothing, jewelry, beards, tattoos, hairstyles and piercings can be a way to land date or attract a new sex partner, as those signifiers often say a lot about us as people. It's not just primates: Tattooed and pierced people get a lot of attention on online dating sites, for example, because they mark themselves as unique.

So go on and book that tattoo appointment and abandon your razor. Science says it's working for you.