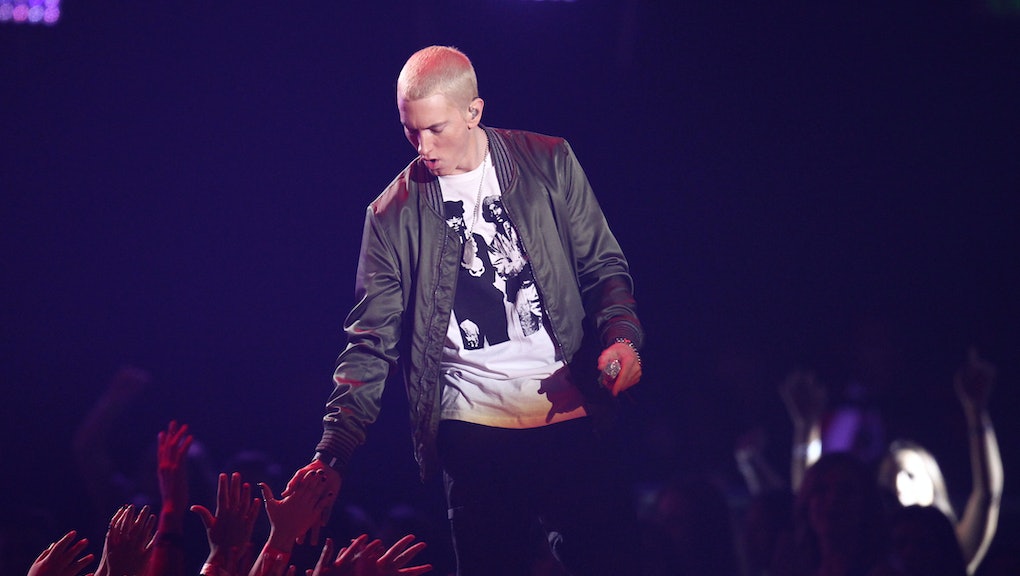 Eminem added footnotes to his legacy Thursday. The Detroit MC became the most recent in a line of rappers and producers — from A-Track, Rick Rubin and The-Dream — to annotate their past works on Rap Genius, sharing the inspirations behind their biggest songs. Over the course of his citations, he revealed one old and underrated song that played a particularly important role in the development of his lyrical persona. "Just Don't Give A Fuck" is where you most clearly see Marshall Mathers die and the psychopathic, anti-pop star Slim Shady emerge in full form.

The early Eminem. Before Eminem got any sort of mainstream attention, he rapped with a group called D12. The first solo tape he put, Infinite, sounds nothing like the Eminem who made life miserable for Total Request Live stars in the late '90s/early '00s. He rapped about his struggles raising his daughter in a slum and bragged a lot, like a lot of mainstream hip-hop. There was little original about him — and he started getting compared to a lot of other rappers.

"People were saying that I sounded like AZ and Nas. I was upset," Eminem annotates. "Not to say that I didn't love AZ and Nas, but for a rapper to be compared to someone, for people to say that you sound like someone else — nobody wants that. I had to go back to the drawing board.

"So I remember getting mad. I was like, 'I'm gonna rap like I don't care anymore. Fuck it.' I started to write angry songs like 'Just Don't Give a Fuck.'"

The new Slim. The lyrics of "Just Don't Give A Fuck" sum up everything Eminem would push for the next decade of his career: "Extortion, snorting, supporting abortion / Pathological liar, blowing shit out of proportion / The looniest, zaniest, spontaneous, sporadic / Impulsive thinker, compulsive drinker, addict."

The song hits on all the taboos he would violate, all of society's vulnerabilities he would exploit. He talks addiction, his celebrity vendettas and his grotesque obsession with rape. He admits all of it was to force his listeners to react. "A lot of the aggression came from the Hip Hop Shop days, when you wanted to get a reaction out of people," Em annotated. "When you're behind a microphone in a studio, you're not going to see someone's reaction. So I wanted to say the craziest shit, imagining the reaction I would get if someone was sitting by a speaker."

While going deeper he helped remove some of the culpability by creating an alter ego: Slim Shady, who makes one of his first appearances on "Just Don't Give A Fuck." The family man, struggle rhymer was dead. Slim Shady was running the Eminem show. "When I started rapping as Shady, as that character, it was a way for me to vent all my frustrations and just blame it on him," he wrote. "If anybody got mad about it, it was him that said it, you know what I'm saying? It was a way for me to be myself and say what I felt. I never wanted to go back to just rapping regular again."

And he never really did. Some of his newer material has been a little more open-minded and honest, such as his 2014 track "Headlights" where he apologized to his mother for the hell he put her through over the years. But for every "Headlights" there's been a "Rap God" to mortally offend the homosexual community, or a "Shady CXVPHER" to glorify domestic violence.

Eminem made his decision to use his lyrical abilities for evil rather for good because he knew it would help distinguish him from the legends that built the genre. For better or worse it worked. His controversial content got people to look closely his lyricism, which — all offenses aside — has been top notch since day one.

Once upon a time Eminem gave a fuck. But perhaps hip-hop wasn't quite ready for a conscious, white rapper. He knew he could build a career continually telling the world to go fuck itself. He was right.