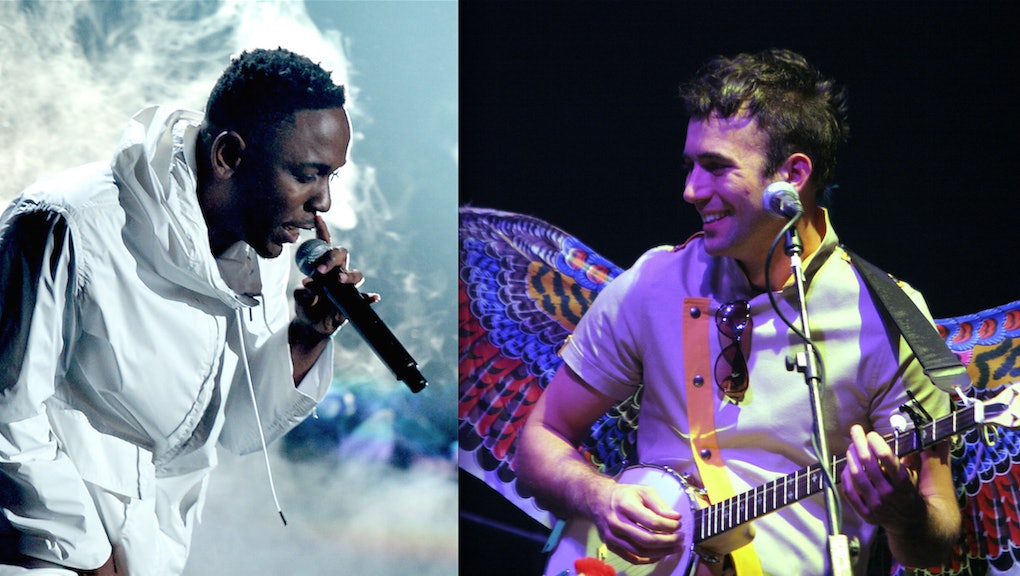 Hindsight is 20/20, and if the past few months have made anything clear it's that 2014 was sort of a musical let-down.

Pharrell's "Happy" and Iggy Azalea's "Fancy" were two of the most dominant songs of the year. Though "Happy" came out in 2013, and "Fancy" was a frankenstein industry creation, they maintained a near monopoly on pop music. Meanwhile, two of the biggest album events were Frozen, the soundtrack from a 2013 Disney movie, and Taylor Swift's 1989 — the only record released in 2014 that really managed to make a significant commercial dent.

Thankfully, 2015 is already shaping up to be far better. A little more than three months in, we've heard two record-breaking hip-hop albums, a siege of brilliant indie music and a truly worthy, historic No. 1. Forgive us, Taylor, but 2015 is music's year.

A brilliant year for hip-hop: The very first minutes of 2015 already included a better pop single than most of 2014's output. Kanye West released his heartfelt "Only One" at midnight on New Year's Eve — so, technically, it could be considered the last song of 2014, rather than the first of the year. The song had a truly unique sound and profoundly personal lyrical content — it managed both to wow critics and gain an expansive reach. Few mainstream pop songs from last year could boast the same.

Kanye was an early signal that this would be a great year for hip-hop especially. A couple months after "Only One," Yeezy's protégé Drake released one of his strongest records to date: the confessional "mixtape" If You're Reading This It's Too Late. Without any lead singles or loud promotional stunts, the entire album ended up charting on Billboard's Hot R&B and Hip-hop Singles charts, breaking records for most simultaneously charting singles and for most first-day streams on Spotify.

That second record didn't last long though. Kendrick Lamar broke it with his accidental surprise release of his monumental To Pimp A Butterfly, which clocked 9.6 million streams on its first day. The album is the most lyrically and compositionally impressive hip-hop album we've heard in years. It made such an impact that it vaulted Kendrick from No. 82 to No. 1 on the Billboard Artist 100, dethroning Taylor Swift for a week. It may prove key to a new future where repetitive pop hooks aren't the only way to turn an album into a chart-topper anymore.

A big year for indie, too. Outside the hip-hop sphere, we've also heard incredible releases in indie rock. Sufjan Steven's seventh album Carrie & Lowell might be his most transcendent yet. As Adam Horn wrote for Mic, "The record is an unflinching confrontation with the bleakest facts of the human experience — separation, depression, death — that redeems these facts of their sense of meaninglessness and so makes life itself, through art, more livable." It launched the singer-songwriter to near-Bob Dylan levels of artistic achievement.

Meanwhile, Modest Mouse returned with their first record in eight years, Strangers to Ourselves, which pushes their sound into unexplored territory while still keeping their visionary lyricism front and center. Similarly, Father John Misty and Björk have all released career-defining albums, while newcomers like mellow songsmith Tobias Jesso Jr. and Aussie songwriter Courtney Barnett are breaking onto the scene in a big way.

All that goodness is moving into pop, too. Mark Ronson and Bruno Mars' "Uptown Funk" has come into its own as a potential game-changer for the genre. Just last week it entered record-breaking territory, becoming the Billboard chart's longest-running No. 1 of the 2010s. If it stays at the top for three more weeks, it will tie Mariah Carey's "One Sweet Day" for the most weeks in that spot. It's still got some groove left in it.

Of course, 2014 wasn't a wasteland — its popular output wasn't exceptional, but there were some true gems. For starters, D'Angelo released an incredible new record, and Run The Jewels revealed themselves to be a potent political force. But 2015's musical output as a whole has simply seemed more vibrant. We've had major creative achievements in nearly every genre. And more are on their way. In April alone we'll get a new Passion Pit album, some new bummer rock from Blur and new Alabama Shakes. Later this year we'll likely see new records from Rihanna, Kanye, Chance The Rapper and possibly even Frank Ocean. It's going to be a wild ride.