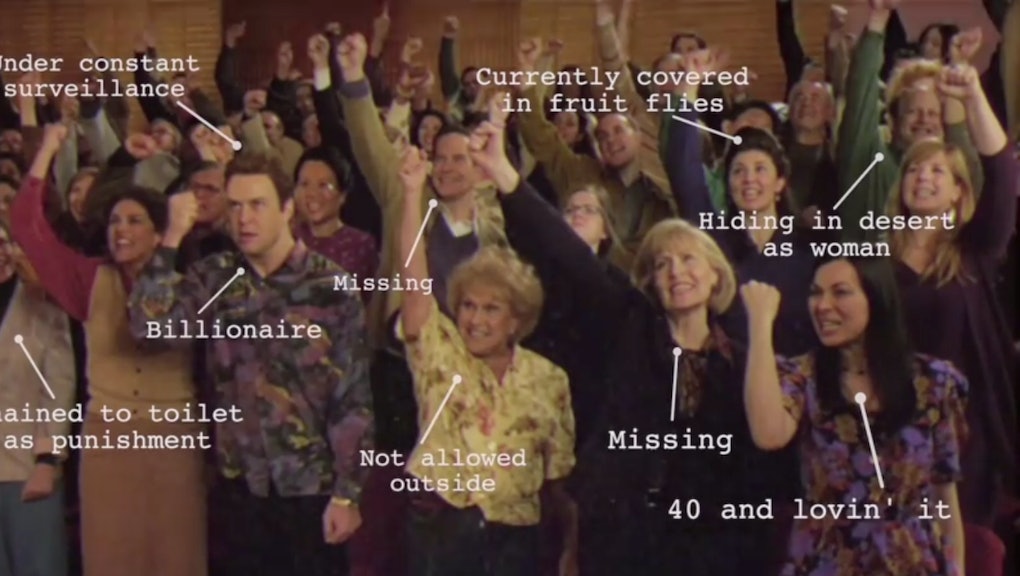 In the wake of the HBO premiere of the documentary Going Clear: Scientology and the Prison of Belief, many peoples' eyes have been opened to the secretive and sometimes dangerous history of the relatively young religion of Scientology.

Leave it to Saturday Night Live to give us a short takedown in the form of a music video about the "Church of Neurotology," a thinly veiled parody of the Church of Scientology.

The sketch starts out with the lines: "In 1990, the Church of Neurotology made the following music video. It has been updated based on new information about the church." And it's that "new information," sometimes pulled straight from Going Clear, that's hilariously creepy and sadly accurate.

There's the woman who left the church years ago:

The man who's left the church and since become a vocal critic:

The church member who's trapped in a hole (yes, this is an actual part of Scientology, according to Going Clear).

The guy who uses information collected during auditing sessions to blackmail church members in various ways.

The church leader who's physically abused numerous members of the church:

All these people, with their myriad problems:

While the sketch is about the Church of Neurotology in name, almost all of the specifics and jokes are based off actual details about Scientology exposed in Going Clear. The fact that there was this much comedy gold to mine from the actual facts of the situation — at least according to the HBO documentary — is quite troubling.

Though the Church of Scientology has responded to Going Clear with an aggressive and somewhat laughable Twitter and social media campaign under the handle @FreedomEthics in a purported attempt to remove the bias and highlight the facts, the church has done nothing to offer any solid evidence denying Going Clear's claims.

While it's easy to write off the SNL sketch and laugh about Scientology's claims of alien gods and super powers, the allegations Going Clear put forward reveal an organization making massive amounts of money off the work of brainwashed patrons while abusing their members and using privileged information to control the lives of thousands of people.

Scientology's religious status under the eyes of the IRS give the organization a number of financial and political privileges. That, coupled with the brainwashing done to many of its members, make these allegations alarming and in need of further investigation.

SNL nailed the joke, now it's up to everyone else to follow up.