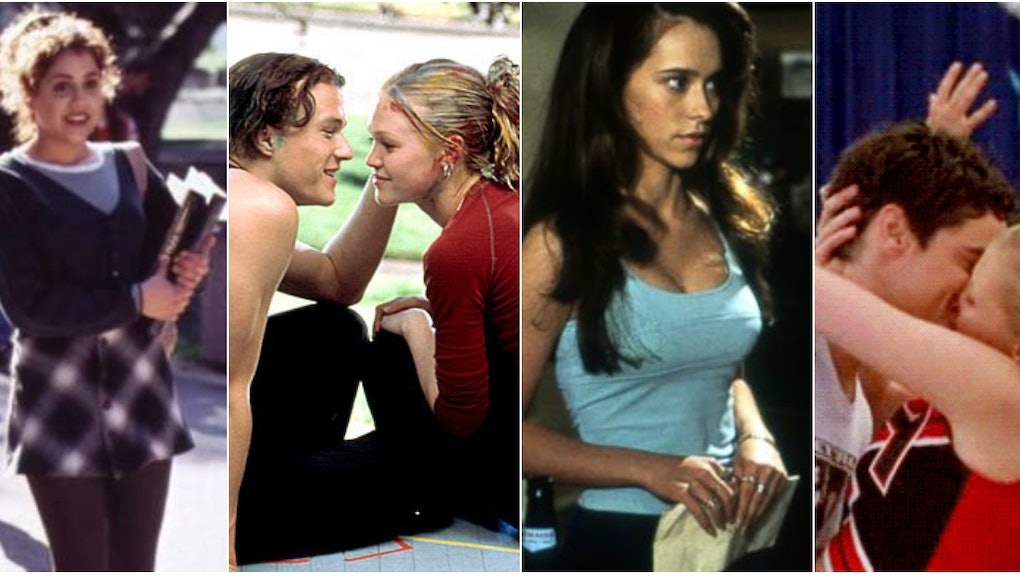 We're the generation of sex on TV, IUDs and the very phrase "sex positivity." So it's strange to think how little we were actually taught about sex growing up.

According to a recently released survey from the Public Religion Research Institute, 75% of millennials support sex ed being taught in schools, but 23% never actually took a sex ed class. Of those fortunate enough to get some form of sex ed, 37% found that whatever they were taught was minimally helpful, focusing mainly on abstinence, contraception and STIs (important topics, for sure) and less on consent, healthy sexual relationships and — God forbid — pleasure.

Moreover, the sex ed many of us got focused narrowly on straight sex: Only 12% of the millennials in the study could say that same-sex relationships were ever brought up at all.

With this being the case, how did we learn anything about sex? From the movies we watched at sleepovers, of course. The informal education we gained while snuggled in sleeping bags eating popcorn and candy might not have been the full picture, but it wasn't half bad, either. Here's what we remember learning.

1. Clueless — It's totally OK to wait to lose your virginity.

She may have been a virgin who couldn't drive, but Cher in Clueless showed that waiting to losing your V-card doesn't automatically make you uncool — and poor Tai showed that losing it young isn't your one-way ticket to popularity, either. Given that teens today (and in the past and, unfortunately, probably into the future) feel pressured by their peers to have sex, the reminder that there's nothing wrong with being picky is valuable, whether it's deciding which shoe you put on your foot or which penis in your vagina.

2. Pretty Woman — Safe sex doesn't have to be awkward.

It was always disappointing that in Pretty Woman, Richard Gere's Edward expressed his disdain for condoms and was willing to sleep with Vivian without one. But when America's girl next door unashamedly called herself a "safety girl" and openly presented the options, we got the message: Condom use should just always be part of the equation.

That's crucial, considering numerous studies have shown that even as young women have more sex, many remain uncomfortable with inquiring about or providing condoms. Vivian was about as comfortable and confident a heroine as we'd ever seen.

3. Superbad — The first time you do it, it's supposed to be awkward as hell.

Yes, there were plenty of misguided moments and takeaways from Superbad, including the overarching message that teenage boys really only care about getting laid and drunk (or drunk and laid, as the case may be). But one thing the Judd Apatow movie gets right is that almost everyone's first time is awkward and uncomfortable, if not downright humiliating.

4. Fast Times at Ridgemont High — If you're confused about something, just ask!

Fast Times at Ridgemont High introduced us to unprotected sex, teen pregnancy and abortion, the latter being refreshingly free from political and religious drama. But the teen classic also showed us that there's a lot of stuff included in sex beyond the basic P-in-V act — and if we're ever confused about any of it (say, blow jobs), it's totally okay to ask for advice. Being able to chat freely about how to hinge your mouth or how much "comes out" when a guy orgasms? It's not just lunchroom chatter — that openness and communication is the stuff healthy sexual relationships are built on.

5. 10 Things I Hate About You — You can't assume to know what anyone else does in their own bedrooms.

There are so many lessons that came out of 10 Things I Hate About You, and not just the fact that Heath Ledger really should have cut his hair more. But one of the subtlest lessons is that you can't make assumptions about what anyone is or isn't doing sexually, or what they want. This was abundantly clear from the paranoia with which Bianca and Kat's obstetrician dad viewed his teen girls, always worried they'd get pregnant when they were barely having sex.

And that was clear from the absurd declaration Bianca makes when, looking for the goods on her sister so she can go to prom, she finds black panties in Kat's drawer. Black underwear as the clear symbol of sex? Even our tween selves knew Bianca was jumping to conclusions.

The scene may be comedic in its own, unique, Wet Hot American Summer way, what with the cheesy music and tube socks, but the tool shed scene between McKinley and Ben was, for many of us, our introduction to gay sex on screen. Considering how important visibility is for our understanding of LGBT individuals — and considering it took us over a decade after Wet Hot American Summer to get a substantial number of realistic representations of gay sex on TV — this scene was no small thing.

7. Can't Hardly Wait — Never settle for someone who doesn't respect you.

Ah, who can forget Mike Dexter's rancid machismo throughout all of Can't Hardly Wait? After a public and failed display of trying to get Jennifer Love Hewitt's Amanda back, we learned three things: It's all downhill after high school for the Mike Dexters of the world; the quiet, shy guy, who looks to Barry Manilow for advice, just might be your best bet at love; and you should never settle for someone who would publicly shame or disrespect you. We didn't know the words "slut-shame" back then, but Mike's "Who's gonna want you now?" to Amanda rubs us wronger and wronger the older we get.

9. The Wedding Singer — It's OK to wallow in heartbreak, even if you're a guy.

In The Wedding Singer, after Robbie's fiancée ditches him, he takes to his bed for weeks to listen to The Cure, then finishes writing a song that compacts all his emotions into several uneven verses. We might have been slightly terrified at the outpouring of emotions, having never experienced breakups quite so harsh, but Adam Sandler's wildly raw emotions in The Wedding Singer were actually what so many young girls and boys probably needed to see. Guys can cry too, you know.

There may be certain guys or girls everyone's drawn to, or are seen as the popular, conventional choices. But if you're drawn to someone else and find yourself flirting or feeling unexpected emotions, go with those feelings. In fact, science shows that it's the unconventional types we're attracted to. If Bring It On taught us anything (besides all those awesome cheers and dance moves), it's that neither you nor anyone else can predict who your best match will be. You've got to go with your gut.

The best takeaway from She's All That? Stay true to your values, no matter how many men take an interest in you after your makeover montage or express interest in taking you to bed. We loved Laney for not sleeping with Dean just because he took her out. Just because you've been taken to prom — or out on a date, or to a fancy function or anywhere, really — doesn't mean you owe anyone sex. Ever.