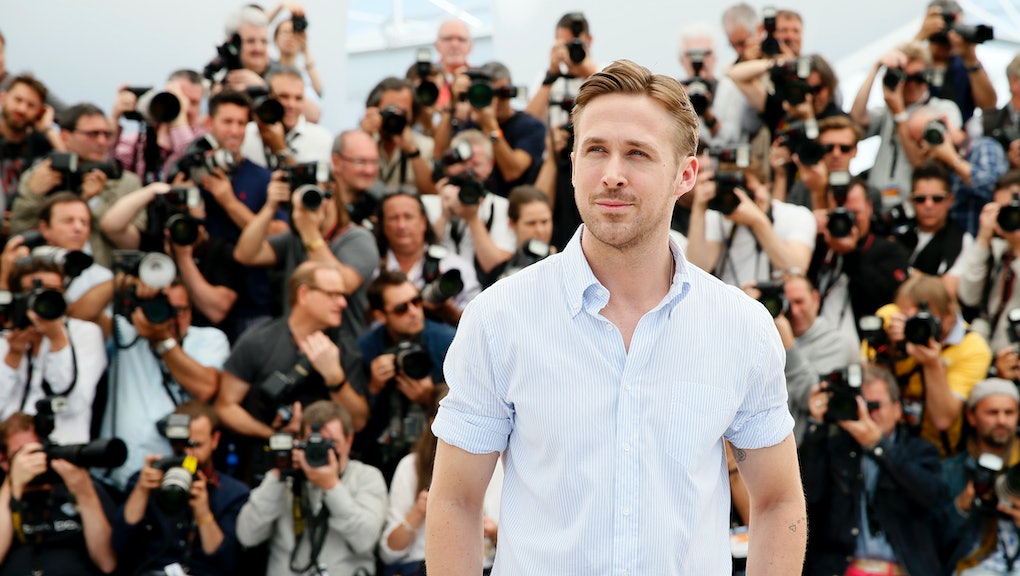 Looking at Ryan Gosling's career, 2011 feels more like 40 years ago than four. That was the year the überfamous actor showed new depths, from serving dark and brooding in Nicolas Winding Refn's Drive to giving us a more comedic side in Crazy, Stupid, Love. Finishing a hot streak that started with the critically adored Blue Valentine in 2010, Gosling seemed on top of the world.

Fast forward four years, past a few bad movies, a baby and a declaration of retirement, and the man who once seemed like our next great movie star is releasing his directorial debut in theaters and on demand simultaneously. At only 22% "fresh" on Rotten Tomatoes, Lost River won't convince anyone Gosling missed his calling as a director.

Gosling's career isn't dead, but things aren't exactly going well when the most popular thing you've done in recent years is accidentally becoming the face of the a meme. What went wrong for the dreamy, skilled actor who could make our hearts throb in The Notebook as easily as he made them pound in Half Nelson? And more importantly, what comes next?

After his terrific triple play in 2011, capped by a best-in-show performance in the otherwise snoozy The Ides of March, Gosling's luck quickly turned south. He starred in three films in 2013 as well: Gangster Squad, The Place Beyond the Pines and Only God Forgives. This was a hat trick of an entirely different sort: Each performance earned him harsh critical notices, most revolving around the idea he was reaching the point of self-parody.

He reminded critics of his Drive character far too often and far too quickly. His reunion with Blue Valentine director Derek Cianfrance inThe Place Beyond the Pines featured what the New Yorker's David Denby called an "inexorable-loner routine." New York magazine's David Edelstein lamented how he traded being an actor for "one long, moist stare" of a performance in Drive director Refn's Only God Forgives.

Perhaps sensing himself getting repetitious, Gosling announced in March 2013 that he'd be retiring. "I've lost perspective on what I'm doing," Gosling said at the time. "I think it's good for me to take a break and reassess why I'm doing it and how I'm doing it. And I think this is probably a good way to learn about that."

Gosling decided to try his hand at directing. For his debut, he chose to cast — and you may be noticing a pattern here — his Drive co-star Christina Hendricks. The film, once called How to Catch a Monster but since retitled the much lamer Lost River, debuted at the 2014 Cannes Film Festival in Italy. It was promptly ravaged, not just by critics but by a booing audience.

Once again, Gosling was hit with thinking too much of his past, making a film that was too derivative of other directors including, of course, Refn. "Think Wikipedia essay rather than love letter," Telegraph critic Robbie Collin wrote of the directorial references. Justin Chang of Variety echoed the call of Refn replication, adding that as an amateur director, Gosling didn't have his mentor's level of control.

As Lost River limps into theatrical and home release, it's nearly impossible to imagine anyone will trust Gosling with another project. Yet the bigger question is whether Gosling's cinematic magic is depleted entirely. Thanks to his cultural cache and the relatively quiet failure of Lost River, he's managed to avoid badly tarnishing his star. That's not going to last long, though.

He needs to shake off his Drive hangover, clearly; separation from Refn and perhaps even Cianfrance is smart. In fact, Gosling needs to rework entirely. The ideal would be no more projects with hyper-stylized violence and a brooding anti-hero for him to play. Unfortunately, his next three projects are right down that alley: Terrence Malick's Weightless this year, a crime thriller with Russell Crowe called The Nice Guys next year and a drama about a financial crisis called The Big Short in the future.

If he can get through those releases without causing critics and audiences to turn on him, Gosling has a shot to become the movie star he had the chance to be. To do that, he'd be wise to look at his "Hey, Girl" incarnation for inspiration: Be flirty, be charming, but above all else, have a sense of humor about yourself.

Gosling already has the hearts of millions. It's time for him to earn them — before he loses each and every one.