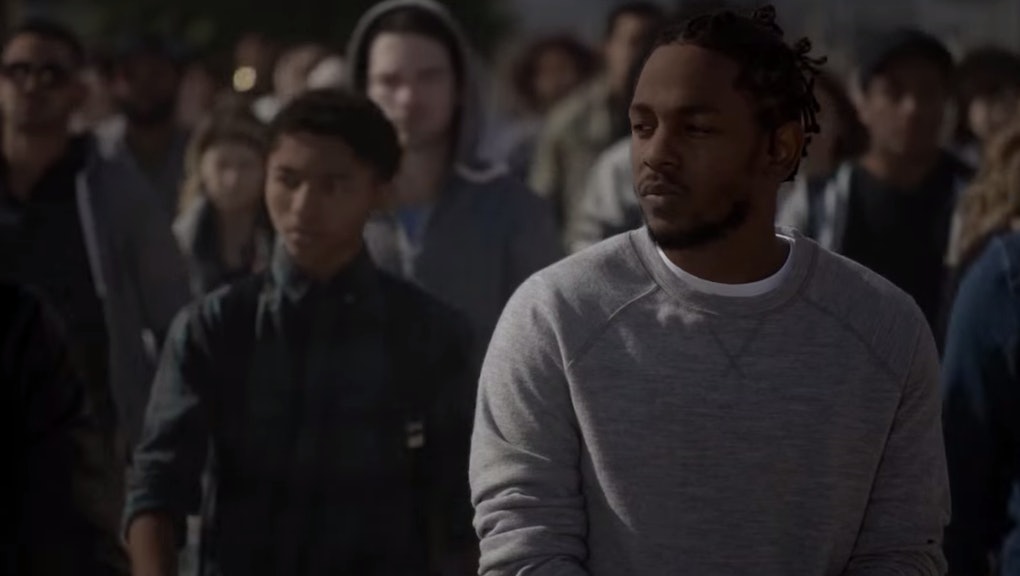 But less than a month after the record's release, Lamar has a new revolution to sell the world, one that's much easier to attain: Reeboks. It's increasingly commonplace for artists of Lamar's stature to do commercials. There's nothing wrong with selling out — it's often the best way for an artist to make money. Lamar went further, though — in a single minute, he supplants his record's call to re-examine our view of race and the power of celebrity influence with a call to buy Reeboks.

"We can no longer sit idly by while the powers that be tell us how to live, how to think, how to act, all the while writing about so-and-so not caring about us," Lamar says in the commercial. They're solid lines, well-aligned with the message of the record. But in speaking them, Lamar becomes the voice of one of those "powers that be" telling us "how to act" — buy expensive sneakers, that's how you communicate your personality and vision of the world. After a record concerned largely with how he should use his celebrity influence, this seems a wrong turn.

It's a message antithetical to the one on To Pimp a Butterfly. So many songs on To Pimp a Butterfly are dedicated to downplaying the importance of material goods. On "Wesley's Theory" a satirical and sinister embodiment of Uncle Sam encourages Lamar to buy more material goods because he "deserves it." On "For Sale?" Lucifer himself (embodied by "Lucy") offers Lamar millions in material goods, effectively in exchange for his soul. The record, though, is meant to show that none of those things bring Lamar any sense of fulfillment.

It's not until he sheds all these material influences does he achieve freedom and enlightenment — that he can launch his revolution.

It's a common trap. The trouble isn't so much that Lamar is appearing in commercials — it's that he's selling his revolutionary agenda to a shoe company. Corporations have been co-opting "revolutionary" language for years to sell products. It's a brilliant stratagem on the corporations' part, as it uses active language and taps into fundamental youthful drives for rebellion and liberation. But the outcome is selling things — not changing things. As political scholar Thomas Frank wrote in his 1997 book The Conquest of Cool, consuming is "redefined as 'rebellion'" in order to "transform the myriad petty tyrannies of economic life — all the complaints about conformity, oppression, bureaucracy, meaninglessness ... into rationales for consuming."

The trends are just as real more than 15 years later, and the language of hip-hop is equally ripe for co-opting. Lamar, with his mythic status as something of a "prophet," is the perfect figure to veil a Reebok product line with revolutionary significance.

But Lamar himself shouldn't shoulder the whole of the blame. It's an unfortunate reality, but musicians don't make as much off album sales anymore. And since the art itself often can't bring in significant money, artists have to turn to corporate sponsorships to make up the difference — this is something some of our best musicians recognize. Lamar's other Reebok commercials have been tolerable. His first talked more about style and finding a meaningful outlet for expression. And exercise is certainly a meaningful outlet. The revolutionary language of his most recent commercial, though, is intolerable. That's Lamar selling his art more than it is selling his fame. It stalls the momentum of the actual revolution preached on To Pimp a Butterfly.

That revolution is available to all. It costs nothing. It has to do with gaining knowledge, gaining perspective and preaching peace. The revolution of Reeboks "Ventilator" campaign costs $79.99. It's available for purchase on their website.