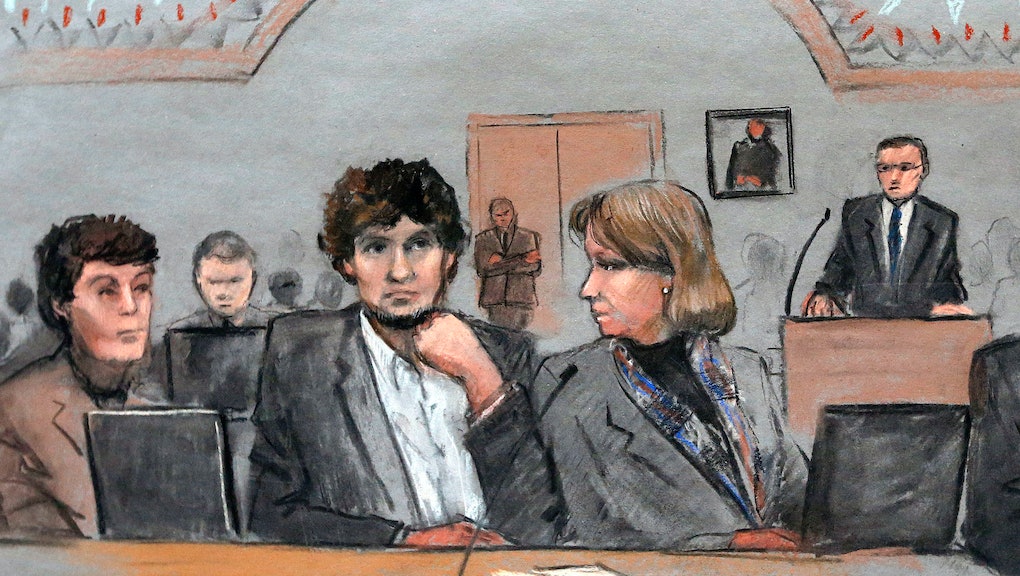 The Boston Bomber Has Officially Been Found Guilty on All Counts

On Wednesday, jurors found accused bomber Dzhokhar Tsarnaev guilty on all 30 counts for his role in the 2013 Boston Marathon bombing. The attack, one of the most visible since 9/11, left three dead and hundreds of others wounded.

The jury took roughly 11 hours to reach their verdict on 30 charges against Tsarnaev after closing arguments wrapped up Tuesday morning. More deliberation will follow to determine his sentence.

Tsarnaev's fate went to the jury almost two years after his crimes were committed. He was found guilty on 30 federal criminal charges covering conspiracy, carjacking and using weapons of mass destruction. Seventeen of counts came with the possibility of the death penalty.

A decision will follow from the jury to determine whether Tsarnaev will face the death penalty of spend the rest of his life in prison.

On April 15, 2013, Tsarnaev, along with his brother, Tamerlan Tsarnaev, detonated homemade "pressure cooker" bombs by the race's finish line. The proceeding manhunt saw Tamerlan killed in a police shootout while Dzhokhar was found hiding in a boat several days later. During his interrogation, Dzhokhar admitted he and his brother had been radicalized and motivated by Islamic extremists online, but they had not been part of any wider organization.

The brothers were of Central Asian origin and had identified with the breakaway Russian republic of Chechnya. They had moved to the United States roughly a decade earlier. Chechen terror groups have been responsible for numerous attacks within Russia, like the 2002 Moscow theater hostage crisis, but had previously been little-known in the United States.

The trial. Despite a not guilty plea by Tsarnaev, both Assistant U.S. Attorney Aloke Chakravarty and defense attorney Judy Clarke had been in agreement over Tsarnaev's involvement in the attack, with the real drama coalescing around whether the bomber would be put to death.

"The defendant brought terrorism into the backyards and main streets," Chakravarty was quoted by CNN as saying, adding, "He chose a day when there would be civilians on the sidewalks, and he targeted those civilians: men, women and children."

Clarke meanwhile tried to persuade jurors that the younger Tsarnaev had played second fiddle to his brother, who was the true mastermind behind the attack.

It was a "senseless act," she said in the according to CNN, while adding, "If not for Tamerlan, it would not have happened."

Sparing her clients the death penalty is a skill Clarke has honed over the years. She has previously defended Ted Kaczynski, the Unabomber, Zacarias Moussaoui, known as the 20th 9/11 hijacker, and Jared Lee Loughner, the man who shot Congresswoman Gabrielle Giffords and killed six other people.

Those seeking capital punishment have, however, always faced an uphill battle. The Commonwealth of Massachusetts outlawed capital punishment in 1984, and has not executed anyone since 1947. Tsarnaev had faced the death penalty as a defendant in federal court, but even then had run against popular attitudes in the commonwealth. The powerful Massachusetts Catholic Conference released a statement calling for Tsarnaev's life to be spared.