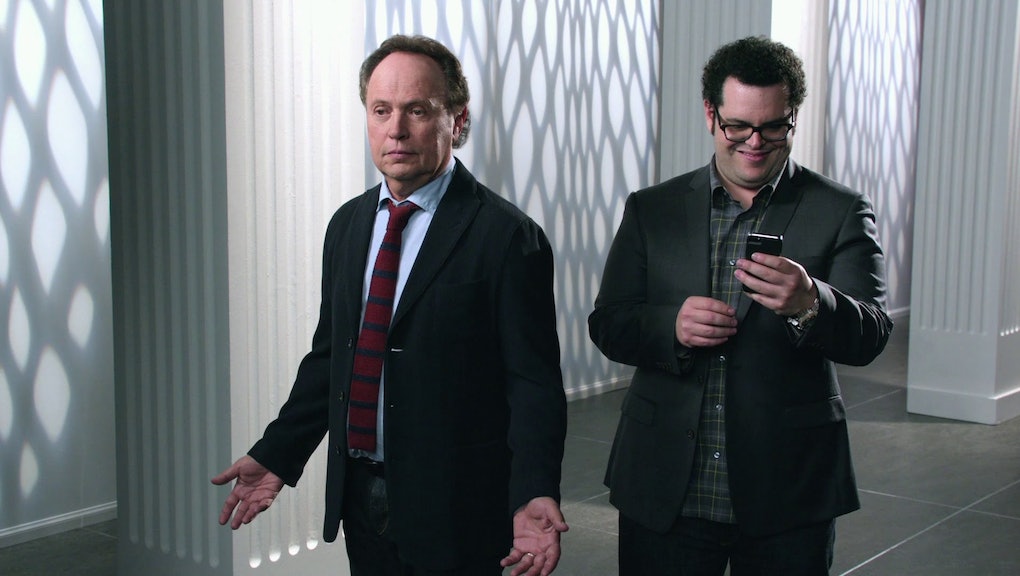 How many comedians can find a home on FX's Thursday night block? Louis C.K. has ruled the roost for five years through a combination of critical fervor and creative innovation. This year, FX is trying to give him some company, adding Billy Crystal and Josh Gad's The Comedians as a time-slot companion.

By the sound of the response so far, The Comedians is no Louie critically. Can it manage to build an audience despite the acid tongues of journalists? Or is it destined to fail?

The Comedians suffers heavily by comparison. Like Louie, it plays with the line between truth and fiction. Crystal and Gad are playing versions of themselves trying to put together a show on FX. In the same vein as ABC's Nashville (a comparison that is as unkind as it seems), an old veteran is paired with a younger hotshot in the hopes that they'll draw different audiences together. Of course, The Comedians itself is going for the same thing. It's meta! Just like Louie, see?

Unlike Nashville, which draws actual greatness from Connie Britton and Hayden Panettiere's collaboration, The Comedians has been called "terrible," "awkward" and "tedious." (To be fair, the Wall Street Journal also called its stars "perfect," so the news hasn't been all bad.)

Most of the criticisms come with direct comparison to Louie. "The Comedians would be a perfectly reasonable title for the far-better FX show with which it has been paired," Andy Greenwald of Grantland says in his review. "Louie revels in its own natural awkwardness," the Philadelphia Inquirer's Molly Eichel writes. "The Comedians feels more labored."

The best point, however, is from Variety's columnist Brian Lowry. "The Comedians is likely more commercial than the acclaimed but little-watched Louie, with which it will be paired, and could even funnel some viewers in that direction," he speculated. That's probably FX's strategy here: Use Crystal's name recognition to boost Louie's numbers. They've never been great, after all, and that would explain why The Comedians is the first in the hour rather than the second.

If that was the aim, though, why ape so much of Louie's style? A more standard sitcom would probably draw a far larger audience. As it is, this just misses the point. What makes Louis C.K. and his show so beloved is his willingness to cause controversy and take time off to creatively reboot. It's what's kept him on the air for five years; if Louie hasn't found its audience yet, it's not going to now. From the looks of things, Louis C.K. is fine with that anyway.

That's why the numbers won't matter for The Comedians. Charlie Sheen's Anger Management aired 100 episodes on FX without making so much as a dent in cultural conversation. Another Louie would only be possible if it became a critical sensation, and not just liked by a few critics. It would need to garner awards attention, best-of notices, viral Saturday Night Live parody skits, the works. The Comedians won't hold a candle to Louis C.K.'s ambitious half-hour of TV, even if it gets boffo ratings. It would need a creator or star to push it to that place, and neither Crystal nor Gad is that star.

There's only going to be one Louie, because there's only one Louis C.K. That means, unfortunately, the comedian superblock is likely to fail. You can't blame FX for trying.