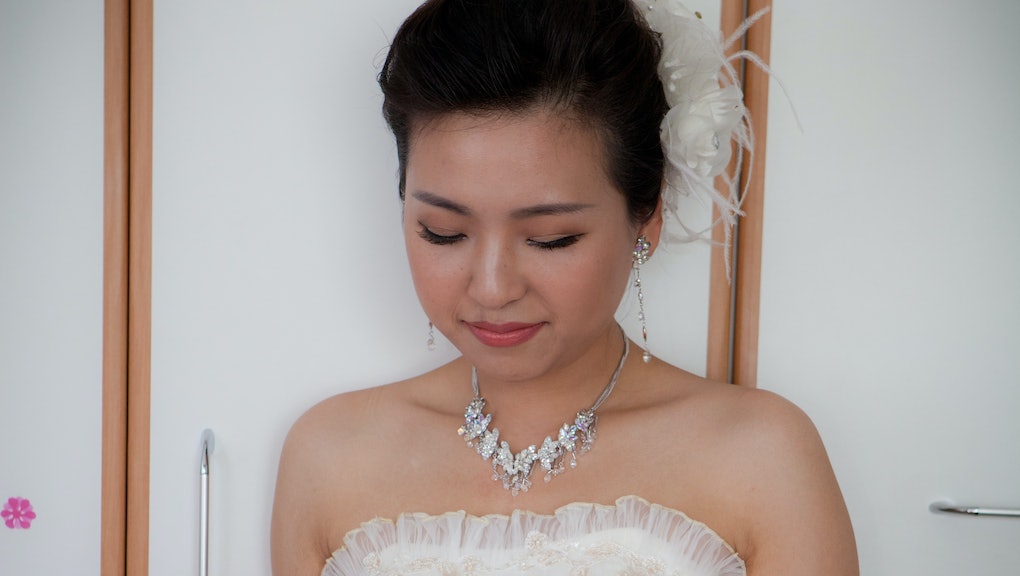 Marriage is changing, from who can get married (37 states now allow gay marriage!) to who actually ends up doing it. Only 26% of millennials are married, a sharp decrease from 36% of Generation X and 48% of baby boomers, according to the Pew Research Center. But marriage isn't obsolete — in fact, in many ways it's thriving as we re-evaluate what the institution really means to us.

And with re-evaluating marriage comes re-evaluating weddings. The Knot's "2014 Real Weddings Study" found that couples are foregoing traditional wedding customs to modernize their nuptials through their choice of rings, dresses and officiants.

That includes — perhaps most importantly — the vows. Couples today are taking cues from badass brides like Amelia Earhart, who banned the word "obey" from her 1931 wedding vows, and reciting promises to one another that reflect the partnerships they strive for. Here are 12 real-life couples who vowed...

1. "To split the difference on the thermostat."

Why it's awesome: When Brad Pitt and Jennifer Aniston got married, Pitt pledged to "split the difference on the thermostat." While that partnership didn't last, as we all know, it was a lighthearted vow that highlights a crucial element of modern marriage: compromise. The key to a happy marriage is learning how to meet halfway.

Why it's awesome: Marriages weren't always about intimate, caring partnerships between equals. But we know well enough now that the happiest, most long-lasting marriages are those in which partners see each other as friends (even studies have proven it true). Jevan's vows to Alithea, shared by the Knot, are a reminder that the bedrock of friendship is what makes a modern marriage stand.

3. "To communicate fully and fearlessly."

Why it's awesome: Among the traditional promise of partnership and faith, real-life couple Anne and Gabrielle told the Knot they vowed "to communicate fully and fearlessly" as spouses. In our modern world, we have seemingly endless ways to communicate — text, email, Skype, Snapchat — and yet still have to work to connect. Sitting down face-to-face, making eye contact and being vulnerable with one another is still crucial, as is being honest without fear of judgment from your partner. Emojis aside, that's what really sustains a lasting relationship.

4. "To grab your butt even when we're old and wrinkly."

Why it's awesome: As we become more open about sexuality (thank goodness), it's only natural that a wink and a nudge find their way into the wedding vows. In an open thread on A Practical Wedding, Zach and Kate shared their vows, which included the promise "to hit on you in awesome accents and grab your butt even when we're old and wrinkly." This promise to keep the spark alive even years down the line is no small thing. After all, studies have shown that all it can take is a simple touch to maintain a sexual connection.

5. "To value our differences as much as our common ground."

Why it's awesome: Love is a powerful force to bring people together, even when they're divided by cultural background, religion and, increasingly, politics. As society grows more divisive and we hold tight to our views, it's valuable to remember that our differences don't have to actually divide us, as these vows from real-life couple Greta Christina and Ingrid, told to Patheos, show.

6. "To continue to love your children, as if they were my own."

Why it's awesome: A marriage isn't just a vow to one person, it's a vow to an entire family — future and present. In 2011, Pew Research found that more than 4 in 10 American adults have at least one "step relative" in their family, including a stepparent, a stepchild or a step or half sibling. These adults are just as likely as others to say that family is the most important element of their lives. So it's no surprise that people have been adapting their weddings to encompass the commitment to an entire family, as Sara M. did in her vows, shared on Offbeat Bride.

Why it's awesome: As Mallory summed up so perfectly to Eddie in their vows, shared by the Knot, appreciating each other's distinct interests and actively sharing in them together makes a huge difference. It goes beyond just putting on the Falcons jersey: Sitting down for the game and sharing a beer is what researchers would call "shared leisure," and it makes a big difference for marital satisfaction. That football game is more than just a football game.

8. "To never try to hurt you just because I'm angry or tired."

Why it's awesome: The chaos of our lives means lots of stress, lots of late nights and lots of exhaustion. (Unsurprisingly, Gallup found that 40% of American adults get less than the recommended amount of sleep.) That can actually wreak havoc on a relationship, which is why it's all the more important to anticipate the challenge. Sarah's vows to her husband, which she shared on A Practical Wedding, are a promise not to take out her stress and exhaustion on him. Instead, she vows to trust him throughout the chaos, "even when we veer from GPS directions, schedules, itineraries and to-do lists."

9. "I have called you my life partner, my significant other, my longtime companion, my lover. ... Now I vow to love you always as my lawfully wedded husband."

Why it's awesome: The vows said by George Takei and longtime partner Brad Altman at their wedding, after the passage of marriage equality in California, were unsurprisingly moving, given they were 21 years in the making. As couples, straight and gay, wait longer to get married (and cohabit in the meantime), labels like "husband" or "wife" are less crucial for defining the relationship than the moments a couple has shared. Takei and Altman's wedding was not proof of their commitment, but rather a tribute to the commitment they had already demonstrated — a truth echoed clearly in their vows.

10. "To be your partner in all things, not possessing you, but working with you as a part of the whole."

Why it's awesome: If we're really striving for egalitarian marriages, then recognizing the equal amounts of work required by each half, as partners, is crucial, especially as women's participation in the workforce keeps growing (57.2% compared to 69.7% for men in 2013). In order for both careers to receive equal focus, a promise not to "possess" but to work to support each other is key. Much like Amelia Earhart refused to use the word "obey," real-life couple Alex and Michelle promised to be each other's "equal in all things" in the vows they shared with the Knot.

Why it's awesome: Traditional weddings tend to be religious occasions, but with increasing rates of atheism and marriages across faiths, religion is taking a back seat to a more personalized expression of commitment. As of 2013, only one third of couples opted to get married in a church, and even more are removing religion from their vows. But that doesn't mean the vows don't appeal to a higher sense of faith — in the other person or in the world, as these scientific, "atheistic" vows, translated from Swedish and shared on Reddit, prove.

12. "I see these vows not as promises but as privileges."

Why it's awesome: Marriage might have been necessary decades ago, but these days it's more of a choice. So it's only natural that the vows we recite — traditionally a list of duties and obligations — actually reflect the happy choice that marriage now is for so many.

Yuval and Dina chose to frame their vows as honors, as they shared with the Knot: "I see these vows not as promises but as privileges: I get to laugh with you and cry with you; care for you and share with you. I get to run with you and walk with you; build with you and live with you." With between 40% to 50% of marriages in the U.S. ending in divorce, it's more important than ever that couples remind themselves that being with their partner is a privilege in itself, and one to never take for granted.