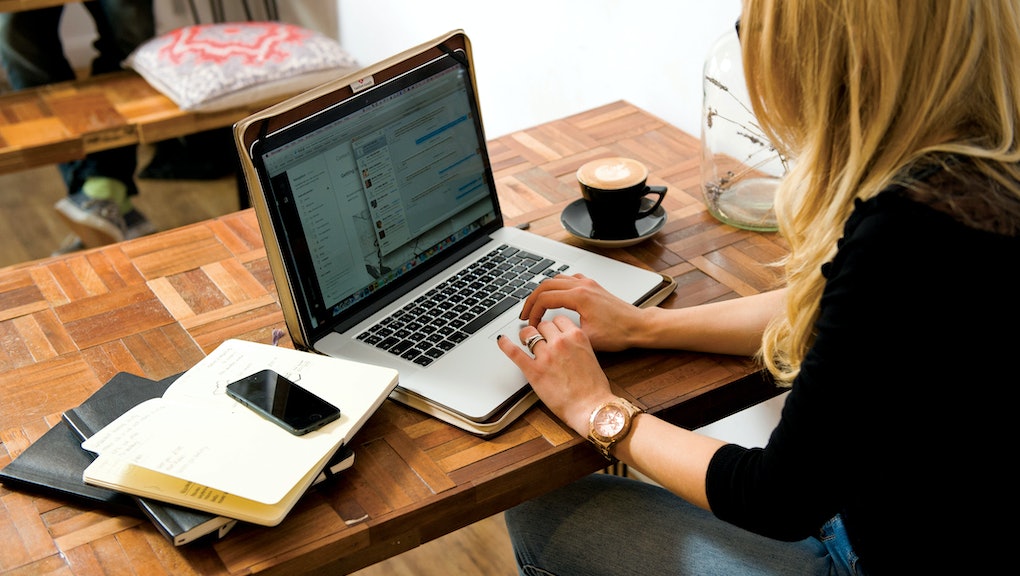 Activist Emily May is no stranger to online harassment. But when she tried to report threats of violence that she'd received to law enforcement, May learned police couldn't help her.

The problem was an issue of wording.

"They will only take action if somebody says, 'I'm going to rape you at this time and in this way,'" May, co-founder and executive director of Hollaback, told Mic. This reliance on specific details, she said, means that "trolls or online harassers can have all these loopholes where they can say things that make you literally never want to leave your house again, and yet the FBI, the police aren't going to do anything to them in return."

While we often notice the ways social media platforms fail to adequately address harassment, it seems the police are hardly better at handling the issue.

This is in large part due to "this sense that online harassment isn't 'real' because it happens on the Internet," media technologist Deanna Zandt told Mic in an email. Such thinking culminates in the "often well-founded" fear that women will still "go through the excruciating process of recounting every piece of trauma" while ultimately failing to see the police act on their behalf, Zandt said.

It's unsurprising, then, that many women not only choose not to report their harassment to the police, but also downplay violations they experience. Zandt said law enforcement officials either don't know how to apply laws meant to protect people from harassment, or they don't care enough. "Women who do choose to report online harassment are more often than not met with the law enforcement version of a shrug," she said.

More than trolling: What happens on the Internet undeniably affects the "real" world, especially in that harassment disproportionately disadvantages and silences some populations — namely women, LGBT individuals and people of color — more than others.

"We have watched people slowly leave the space of trying to make change in the world because of online harassment," May said. It's a point that others have echoed, including journalist Michelle Goldberg, who earlier this year explored the phenomenon of feminist writers being driven off the Internet altogether by harassment for the Washington Post.

This is why, May said, it's so important to "come up with some ways to address this that's more than just telling people to 'not feed the trolls' or 'get a thicker skin.'"

But such a solution is elusive, as those who attempt to report harassment face multiple levels of incompetence. Journalist Amanda Hess wrote in 2014 that when she attempted to report rape and death threats to police, the officer handling her report asked, "What is Twitter?" May echoed that countless women have experienced (and continue to experience) similarly ignorant reactions when they attempt to report.

Credible threats: The problem, May said, is that the language of existing laws fail to "account for ever-evolving technologies and tactics to terrorize women." Loopholes in these laws enable "types of harassment that wouldn't be allowable in the workplace or even on the street."

A prime example of this failure of language is the concept of a "credible threat." In order to pursue claims of harassment, police must deem the threat "credible," although what determines credibility is seemingly up for interpretation. "The number of things I've reported or helped other people report where [authorities have] said, 'That's not a direct threat' are jaw-dropping to me," activist Jaclyn Friedman, who collaborated with Twitter to address online harassment in 2014, previously told Mic.

Anti-harassment advocate Soraya Chemaly also questions the ambiguity of the "credible threat" standard. One woman Chemaly encountered, for example, was sent illustrations in which she was being sexually assaulted, drugged and raped by her harasser. The police told the woman that her threat didn't register as credible. "She has repeatedly sent me her police reports and their feedback," Chemaly told Mic. "I think more than anything she doesn't want to feel like a crazy person, and so she needs someone to believe that she's credible. Because so many victims [are told] over and over again, 'You must be exaggerating, you must be lying, you must be crazy.'"

None of this accounts for the complex histories members of certain communities have had with police. Internet hostility may affect women from all walks of life, but women of color and LGBT-identified women run into a unique problem.

Research shows people of color face disproportionately inequitable treatment from law enforcement across the board. "Women of color are rarely believed when they report any kind of harassment or violence, and it's no different with what happens online," Zandt told Mic. "On top of that, the treatment they endure at the hands of oppressive systems run by people bringing their own bias to the table is appalling. There is basically no incentive for women of color to go to police for help, ever."

Chemaly said the bias may stem from oversimplified methods of recording offenses. "When a black women is a target of a hate crime, when she's called racist and sexist obscenities before she's assaulted, the police department usually picks one," Chemaly told Mic. "So for example, in the reporting tool, you might have to say 'this is racist' or 'this is sexist,' but you cannot say this is racist and sexist."

So what's the solution? In order for progress to happen, we must first target harassment's deep-seated cultural roots. Our society must recognize that "online harassment is real, incredibly damaging and not acceptable," as Zandt put it.

Survivors must also have clear options for recourse, including the ability to immediately respond in some way — whether to the police, in a safe and supportive community or to their harasser directly. May told Mic that providing these options will reduce the trauma for the target of harassment. She also said those who witness harassment should also be "inspired to take action and to want to support that person."

The key to fixing reporting systems may not be clear, but it's abundantly evident that the solution has to be constructed collaboratively. "Collectively we need to stand up and say this is not a behavior that is going to happen on our watch, on our Internet," May said. "And P.S., we have the right to be here."