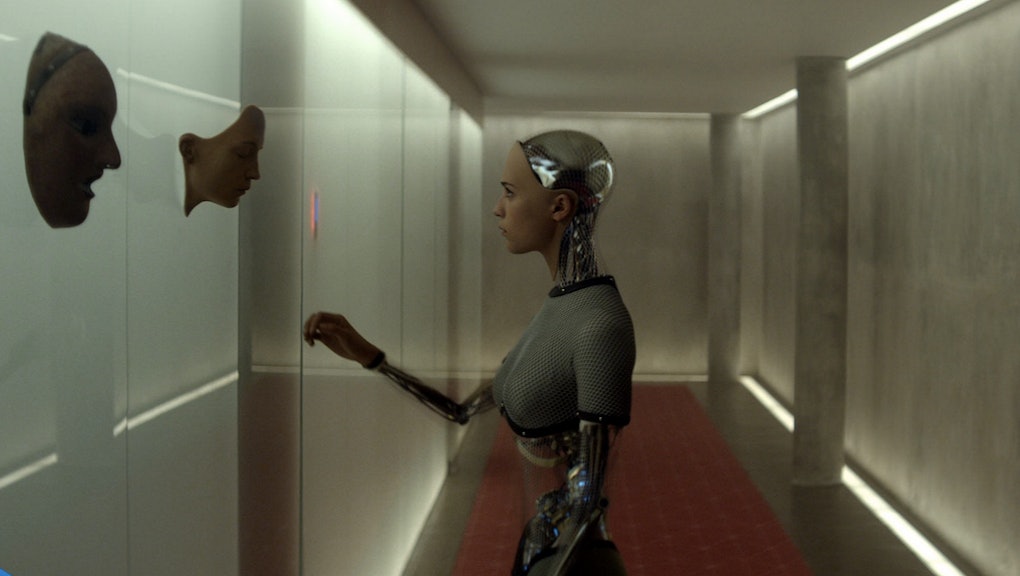 'Ex Machina' Will Completely Change How You Think About Artificial Intelligence

Artificial intelligence has never been quite as gorgeous as in Ex Machina, a new science fiction thriller that hit theaters on Friday. It gets help from Alicia Vikander, who embodies an AI persona named Ava, but her physical beauty is just the surface. The true appeal comes from how advanced Ava is. It's easy to forget she's a machine — or, at least, that's what her architect, Nathan (Oscar Isaac), hopes.

Nathan puts Ava to the test against his employee Caleb (Domhnall Gleeson) in the Turing test, to see if he'll eventually stop recognizing her as artificial. Therein lies the danger of AI: If a man-made machine can stupefy and surpass its creators, there's no telling what it can do — and what we have to fear.

Since it's almost impossible to discuss the film in depth without ruining any twists, consider this a blanket spoiler alert from here on out.

Ex Machina is a tiny movie. Its cast is small, the setting is limited to one house for the bulk of the action and the budget is modest for a science fiction project. But its ideas are huge, largely because it takes its central conceit so seriously. What would actually happen if AI were to be a reality?

The protagonist, Caleb, is as in awe of AI as we are, but only for so long. There's a humanity to this story in how quickly Ava "falls" for Caleb (and possibly vice-versa, though that's left up to interpretation). The subsequent struggle for identity and conversations about free will bring the story to another level. Ex Machina isn't really a science fiction film; it's a movie that makes its most futuristic elements seem immediately possible.

This isn't a wholly serious movie, though. It's incredibly entertaining. What serious movie could possibly feature Oscar Isaac in an elaborate, synchronized dance sequence?

Watch carefully how the movie manipulates, though. You're charmed, you're entertained and then you're quickly reminded of exactly how scary this all is. The female servant Nathan keeps? Another robot with artificial intelligence. Ava's intentions? Not as pure as they seemed. Even Caleb, an incredibly smart programmer who outwits the genius Nathan, ultimately falls for Ava's trap.

For such a small film, Ex Machina is working on several levels. As major plot points are revealed near the end of the film, the audience is left confused and disoriented — just like Caleb, and just like AI similar to Ava could do in real life.

Ex Machina isn't a horror film, but the message it sends about AI is a scary one. This isn't the stuff of science fiction anymore, either. Students are able to create artificial intelligence these days, and it has no less than Bill Gates and Stephen Hawking terrified. Now, there are good arguments to be made that AI isn't that scary, and certainly paranoia of machines isn't the right answer. Ex Machina seeks not to simply scare, but to warn.

Playing god by creating sentient computers is an enormous responsibility. That's the ultimate lesson of this film: Creating AI is something to be taken seriously. The world of sci-fi that shows robots taking over the world may not be realistic, but Ex Machina's world, full of little reminders that with intelligence comes cleverness, could become ours.