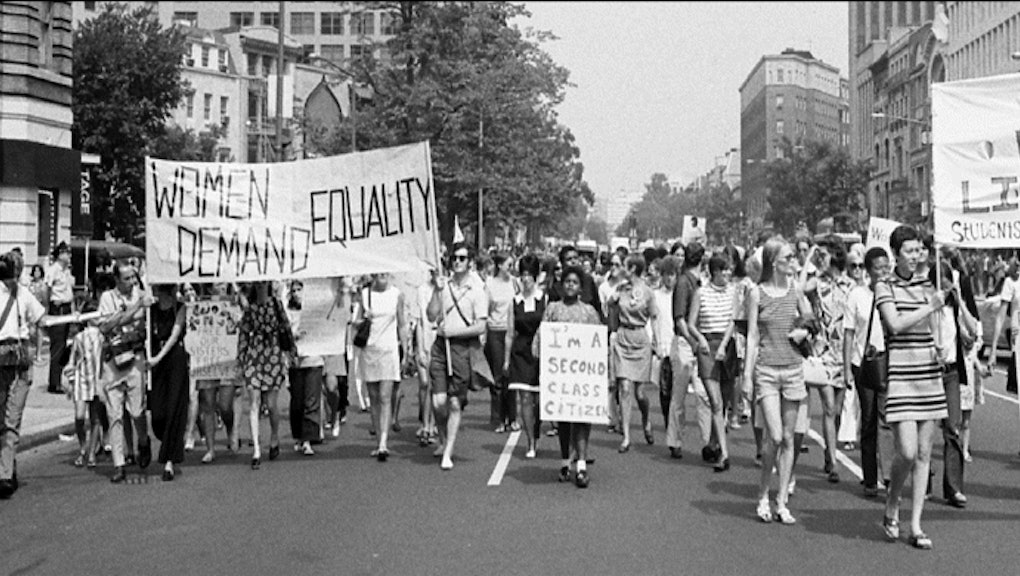 At a Take Back the Night event Nov. 4, 1978, at San Francisco's Galileo High School, the handful of men in the audience were rallied to action by the most unlikely of cheers. "No pricks in the parade!" the women, led by radical feminist Andrea Dworkin, shouted. Twenty-eight-year-old Chris Norton, who was in the audience, recalled the collective sentiment of confusion among the men — "'What should we do?'" they pondered.

Turns out, they knew exactly what to do.

Norton and other Bay Area men established small but influential groups advocating the end of violence against women. In 1978, Men Against Sexist Violence was founded in San Francisco. That same year an antidomestic violence group, named Emerge, formed in Boston, and Rape and Violence Ends Now was created in St. Louis.

Michael A. Messner, co-author of the 2015 book, Some Men: Feminist Allies and the Movement to End Violence Against Women, told Mic via email that those male allies "would not, back then, have worn a 'This is What A Feminist Looks Like' T-shirt." Instead, he says many contemporary men just "show up for a photo-op wearing the 'feminist' T-shirt" but aren't necessarily "doing much, if anything before or after the photo-op to create conditions for feminist change."

"The men we studied for Some Men," Messner said, "both young and old, are for the most part not famous men, and they are doing the day-to-day work with women colleagues to create conversations with boys and men about ending violence against women."

The difference between these activists and the guys whose tweets and sweatshop-produced T-shirts constitute activism, is their level of engagement.

Decades before Emma Watson's HeForShe campaign implored men to be more involved in the global gender equality movement, the men of MASV, in addition to numbers of men across the nation, were advocating for women's rights and justice on the streets. Clearly, had Watson been around to see the men in action, she would approve.

The history: Following an academic conference on feminism, men and violence in 1977 at Laney College in Oakland, California, about a dozen men decided to meet regularly to continue to discuss these issues. These men, many of whom were anti-Vietnam War activists, were inspired by the rising feminist movement and women in their lives. Instead of calling themselves "feminists," they went by "allies" or "pro-feminist," Messner said, because in the late '70s "many women and men believed that one had to have the experience of being a woman in a patriarchal society to claim the identity of a feminist."

MASV worked with women's organizations to stop "rape and other forms of violence against women," and taught boys and young men about respecting women by giving talks at high schools, community colleges and prisons.

Liberation for all: These men understood "that violence against women ... was a lynchpin of patriarchy," the authors write. What these men got right — and what Watson emphasizes in her campaign for gender equality — is that the liberation of women includes the liberation of men, specifically from the confines and expectations of masculinity. Messner said the men of MASV realized that when men embraced feminism, both men and women would benefit.

Messner reiterated to Mic, as he wrote in his book, that "the foundational achievements of feminists in the antiviolence movement have all been accomplished primarily by women." Yet what male feminists can learn from the feminist allies of yesteryear is how to work with women and "deepen [their] accomplishments."

"Male allies have helped to create curricula for schools, and approaches to working with boys and men that are now widely adopted, like the 'bystander approach,'" Messner said, which "seeks to push men to become active in ending violence in their schools and communities."

This truth isn't more clear than it is today, with antiviolence campaigns fighting campus sexual assault and domestic violence. As women become more vocal about equality under the law, the only way patriarchy can maintain its dominance over women is through brute force.

But men can be great feminists simply by talking to other men about masculinity, gender expectations and stereotypes, and ways to prevent violence against women. Perhaps the Walking Dead's Norman Reedus, who said it was time to free the nipple, or Ashton Kutcher, who demand for more men's bathrooms to include changing tables, feel emboldened as allies to women because of the groundwork these men laid years ago.