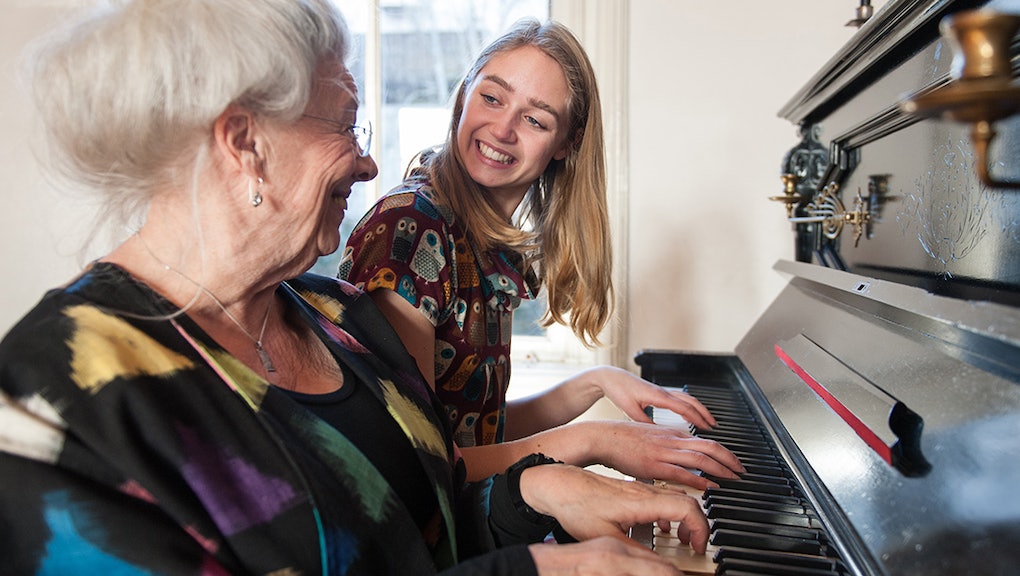 The Netherlands Has a Brilliant Solution to Cutting College Housing Costs

In what might be the ultimate case of killing two birds with one stone, an assisted living facility in the Netherlands has simultaneously tackled the problems of elderly neglect and unaffordable student housing with an ingenious idea:

Students are given free housing in a nursing home in exchange for 30 hours per month of interaction with their elderly neighbors.

Currently, six students live among 160 elderly residents in rent-free apartments at the Humanitas nursing home in Deventer. The students contribute their time through activities like preparing meals, assisting visits to a local shopping center and even teaching the senior citizens how to do graffiti.

Gea Sijpkes, head of Humanitas, told PBS NewsHour, "The students bring the outside world in, there is lots of warmth in the contact."

Creative solutions to common social problems. The Netherlands has some of the most expensive student housing in Europe, if not the world. In 2013, it was second only to the United Kingdom among European countries with the least affordable university digs.

The students are given the opportunity to cut one of the biggest costs associated with the four years of college where more money tends to go out of students' bank accounts than in. In the United States, for example, the total student debt is now more than $1 trillion and students graduate with an average of $26,600 debt. Eliminating the cost of housing from the crippling costs of tertiary education is one way to reduce the financial strain on students upon graduation and could have a tremendous impact on society as a whole.

On the flip side of this deal, the adverse effects of social isolation on the health of the elderly has been well-documented. One study concluded that the "results demonstrate the importance of social variables for predicting disease outcomes in the elderly." A sense of belonging consistently correlated with improved health outcomes for a wide range of diseases.

Scale up. These are two problems that aren't going anywhere for much of the world. There is not much to suggest that people will stop going to school or stop getting old.

The Department of Health and Human Services predicts that by 2050, 20% of the U.S. population will be over the age of 65 and the United Nations predicts that by then there will be roughly 2 billion people over 60 worldwide.

In Aging in East and West: Families, States, and the Elderly, Vern L. Bengtson emphasizes the importance of multigenerational households in providing support and a sense of connectedness for the elderly.

But if we take a leaf out of the Netherlands' book and are bold enough to make this a commonplace practice in America, we might just have ourselves an answer to both problems.