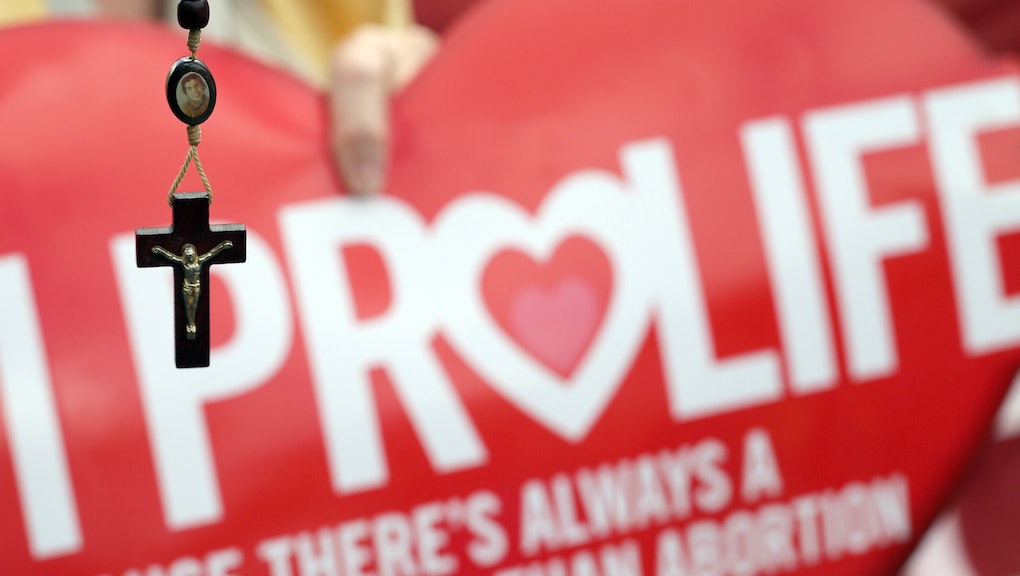 In 2005, Republican U.S. Senate majority leader and licensed physician Bill Frist fraudulently diagnosed brain-dead woman Terri Schiavo as responsive to stimuli after viewing video footage. In hindsight, it seemed like a radical overextension of evangelical values into medicine, but two states just passed laws giving that kind of overreach a run for its money.

This month, Republicans in Arizona and Arkansas passed new laws requiring doctors to tell patients that an abortion can be reversed mid-procedure if the mother is having second thoughts, the Washington Post reports.

Despite basing itself on something medically incorrect, Arkansas' bill creates criminal penalties and civil liability for doctors who refuse to comply. Republican legislators have essentially declared they know more about women's health than all the states' doctors put together.

Wait, seriously? A medical abortion typically involves the patient taking two separate medications under the direction of a physician. The first, mifepristone, blocks a hormone important to fetal development. The second, misoprostol, is taken a few days later and induces contractions that end the pregnancy.

But anti-abortion activists have latched onto a theory proposed by San Diego gynecologist George Delgado, who argues ingestion of the hormone blocked by mifepristone before the misoprostol is administered can effectively reverse the procedure as if by the "grace of God." The twin laws in Arizona and Arkansas are mostly based on a single 2012 study Delgado conducted with just six women in which the treatment was declared effective in four.

Delgado takes his values so seriously that he runs a practice called Culture of Life Family Heath Care, which describes itself as providing "true medical care and abortion alternatives." On his other website, Abortion Pill Reversal, women share stories of Christian redemption through his treatment and throw shame at abortion-seekers.

One testimonial, purported to be written by a woman named "Hannah," claims "I was raised Catholic, but somehow, I had lost my way" and laments that "I was so selfish and self-absorbed that I couldn't allow a baby to protrude into my life." Another, composed by "Sarah," says that she only recovered from her abortion after she "started seeking help and healing from our Lord and Savior Jesus Christ."

Of course, Arkansas' law reads, "time is of the essence."

You know where this is heading. Without actual evidence, Delgado's treatment is a Bible story disguised as real science. Well, there's not much actual evidence.

The Atlantic reported that since about 30% to 50% of pregnancies continued after ingestion of the first drug, Delgado's method might just be claiming credit for random chance. American Congress of Obstetricians and Gynecologists spokeswoman and gynecologist Ilana Addis told the Atlantic the procedure was "not evidence-based" and women undergoing it "would be unknowing and unwilling guinea pigs." Ibis Reproductive Health Vice President Dr. Dan Grossman told the Washington Post that "It's really disturbing that this has been incorporated into a law in Arizona based on a very poor quality study of six women."

Ordering doctors to give misleading medical advice about abortions wouldn't make much sense if Republicans really cared about women's health. The reality is that Republicans want to make the experience of an abortion as exhausting and humiliating as the courts will allow and are happy to coerce doctors into helping. It's shameless and wrong, but don't expect them to stop.