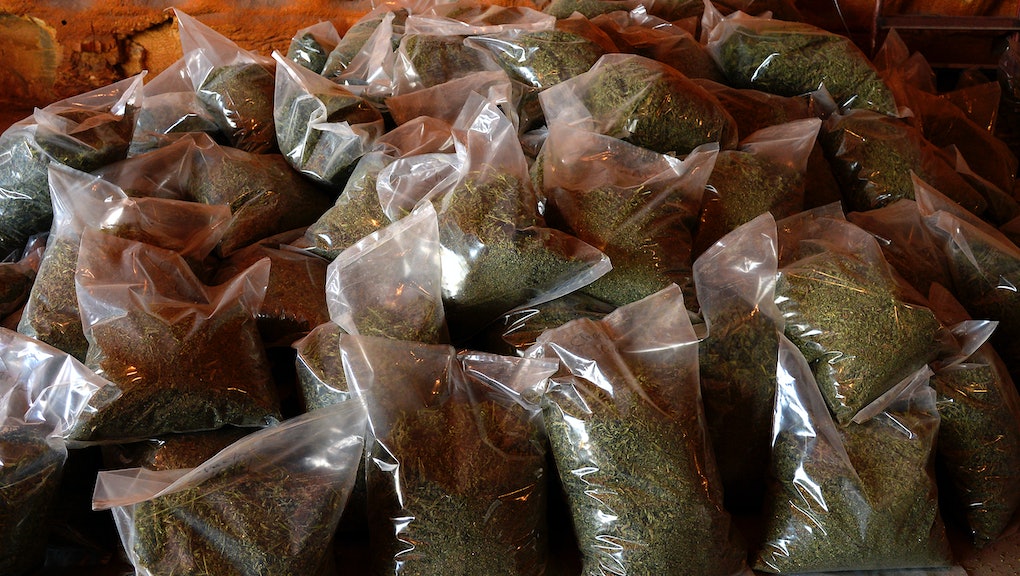 The Drug Enforcement Agency has a message for the federal government: We're going to need more weed.

In a notice posted to the Office of the Federal Register Wednesday, the DEA said it planned to ask federally commissioned growers to increase their 2015 output by 320%, from 125,000 to 400,000 grams. That's more than 880 pounds of government-licensed pot.

The DEA says the spike in demand comes from two sources. First in line is the National Institute of Drug Abuse, which, according to the posting, has submitted a notification asking for "additional supplies of marijuana to be manufactured in 2015 to provide for ongoing and anticipated research efforts involving marijuana." NIDA recently agreed to supply the marijuana for a series of federally approved clinical trials studying the effect of cannabis on war veterans suffering from post-traumatic stress disorder.

The posting also cited increased interest in the medical facility of cannabidiol, a non-psychoactive compound found in certain strains of marijuana. The research and development of cannabidiol products has been a focal point for groups like Citizens United for Research in Epilepsy, which points to increasing evidence that cannabidiol is an effective treatment for children suffering from a rare but debilitating form of epileptic seizures.

Researchers are increasingly exploring marijuana as a serious tool for doctors fighting stubborn and deadly illnesses like Alzheimer's disease and a number of the most aggressive forms of cancer. Ironically, the DEA is in charge of making these requests — and must sign off any clinical study — because of a 1970 law that classified marijuana as a Schedule I controlled substance, alongside LSD and Ecstasy, all defined by the DEA itself "as drugs with no currently accepted medical use and a high potential for abuse."

Last month, however, Sens. Rand Paul (R-Ky.), Cory Booker (D-N.J.) and Kirsten Gillibrand (D.-N.Y.) introduced a bill, called the CARERs Act, to downgrade marijuana to a Schedule II designation, a move that would ease the path for researchers seeking out funding and host sites to conduct new studies.

Heading into a 2016 election season that could see nearly a dozen states voting to legalize weed for medical or recreational use, there are already 23 states plus the District of Columbia that allow the sales and consumption of marijuana for medical purposes. Twelve more have agreed to exceptions allowing for the use of cannabidiol oils. Four states (Colorado, Washington, Oregon and Alaska) and Washington, D.C., have legalized pot for recreational use through voter referendums.

The DEA has one month to agree to its own request. Until then, the posting invites interested citizens to post their comments on the matter — so you can click on over to the website for the office of the federal register and literally put your voice on the public record.