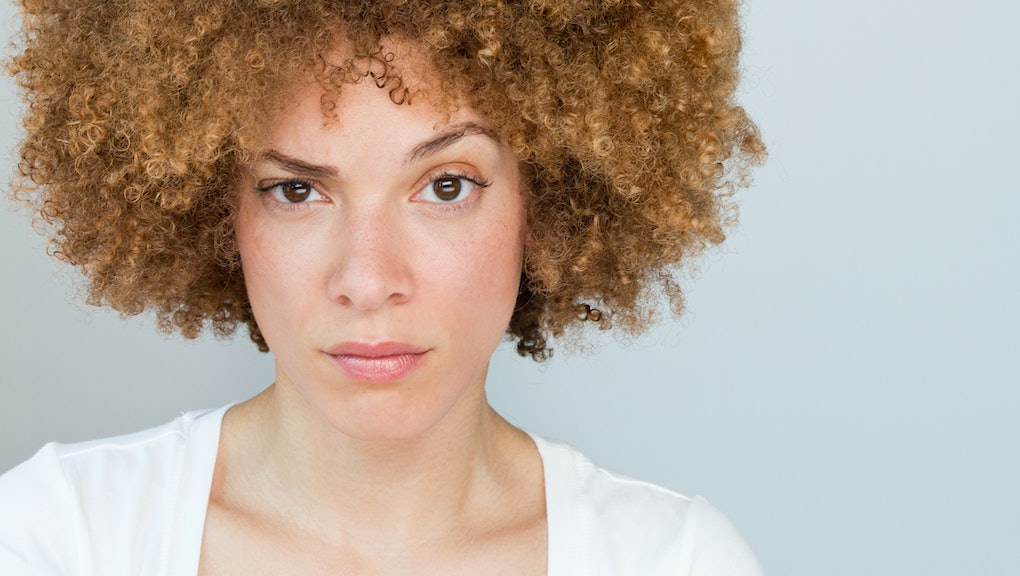 Guys, Can We Stop Calling Everyone "Guys" Already?

Because I am a very serious feminist, I recently tried to go an entire day without calling groups of people "guys."

"Y'all" was out of the question (I'm from Boston), so I made do with "people" for about three hours before accidentally starting a meeting with, "Hey guys, you ready?" This, followed immediately by, "Oh, shit."

You guys, this is getting out of hand. "Guys" has become a sort of second-nature verbal tic synonymous with "everyone." The problem is, "guys" is not everyone. It's guys.

To clarify, here are some guys:

Here are people who are not guys:

I know. It seems like a minor gripe compared with more pressing feminist issues like sexual violence or the wage gap, especially when modern usage shows this kind of language is meant to be colloquial rather than confrontational. And unlike obviously offensive gendered slurs like "bitch" or "slut," there's usually no ill-will behind words like "guys," "dudes" or "men."

But sexism doesn't exist in a vacuum, and language, as the tool that brings order to our thoughts and allows us to communicate, infiltrates nearly every aspect of our lives. When, as in English, it relies almost entirely on the presupposition of masculinity, it can shape how we see the world.

"The 'universal male' (like using 'men' to mean 'people') assumes that the normal, default human being is male," Sarah Grey, a professional editor who has led a course called Editing for Inclusive Language, told Mic. Such thinking has consequences well beyond linguistic sensitivity, affecting everything from economics to advertising to health care.

It's also tiring. As journalist Annie Lowrey recently wrote in New York Magazine regarding subtle sexism in general, "It is pervasive. It is persistent. And it is so, so exhausting, all those subtle hints that you are a little different and that you behavior is being interpreted a little differently."

Male-centric language is just that: a subtle yet constant hint that women are different, that their lives constitute a sort of subcategory of human experience dependent on feminine modifiers (which, in turn, often "infantilize" them, Grey said: "actress, suffragette"). The use of "he" to refer to nonspecific persons doesn't point to some great conspiracy to keep women oppressed, but it does reflect an inequality coded into our linguistic inheritance, a micro-aggression that consistently reminds half of society they are, as they have historically been, secondary.

So why do we say "guys," anyway? Part of the reason saying "guys" is a hard habit to break is because English doesn't have a clear gender neutral pronoun, nor an easy way to address groups of people apart from the distinctly Southern "y'all" or the ungrammatical "youse." "Folks" is old-fashioned, and female generics — such as "gals," "ladies" or "girls" — tend to be used more in the name of irony than as nod to gender equality (more on that later).

Toss in a well-documented history of female oppression and an arguably unfounded aversion to the singular "they," and it's no wonder we've all become "guys," "dudes," "men," "hims" or "hes."

Google's Ngram tool, which tracks word frequency in printed sources over the past 200 years, marks a sharp uptick in "guys" in particular throughout the latter half of the 20th century. Its "vaguely jokey" social media usage, on the other hand, is relatively new, according to an interview with Merriam-Webster editor Kory Stamper in the Washington Post.

But maleness underpins English beyond direct address, from occupations (chairman, postman, freshman) to verbs (to man something) to the human race (mankind). This unquestioned ubiquity of male-centric language makes it one of the sharpest tools of identity erasure; soft sexism is harder to spot, let alone correct.

It can take distance to see what's right in front of us — something Douglas R. Hofstadter created with the 1985 parody article "A Person Paper on Purity in Language." Under the pseudonym "William Satire" (a reference to long-time New York Times political and linguistic columnist William Safire), Hofstader wrote a defense of an imagined world in which English "revolves around the age-old usage of the noun 'white' and words built from it," like "middlewhite, Frenchwhite, forewhite, whitepower, whiteslaughter, oneupuwhiteship, straw white, whitehandle and so on."

"There is nothing denigrating to black people in being subsumed under the rubric 'white' — no more than under the rubric 'person,'" he wrote. "After all, white is a mixture of all the colors of the rainbow, including black. Used inclusively, the word 'white' has no connotations whatsoever of race."

In recasting patriarchal etymology as white supremacist (at least, more blatantly white supremacist), Hofstader highlighted the absurdity of expecting all genders to feel included by specifically masculine generics when they clearly prioritize men in our thinking. Psycholinguist Toshi Konishi confirmed as much in a cross-cultural study of the effects of grammatical gender on thought, writing, "Although 'he' and 'man' are said to be generics, numerous studies show that these words cause people specifically to think of males."

Konishi's conclusion seems obvious in light of the fact that using "women" to reference the entirety of human gender expression is not so readily accepted. Indeed, data collected from a Mic survey conducted using Google Consumer Surveys, 1,528 18- to 44-year-olds revealed that while 71.8% of people "often" used "guys" to refer to mixed-gender groups, 88.1% "rarely" or "never" referred to mixed groups by female generics such as "gals," "girls" or "ladies."

It's easy to find out what a feminized lexicon might actually look like, though, thanks to a Google Chrome extension called Jailbreak the Patriarchy. Created by programmer Danielle Sucher, the extension swaps pronouns in Web content. For example, "he went to the movies" becomes "she went to the movies," and a transcript of the Declaration of the Independence turns into a sort of uncanny valley of U.S. history:

"We hold these truths to be self-evident, that all women are created equal, that they are endowed by their Creator with certain unalienable Rights."

Jailbreak the Patriarchy is as illuminating as it is entertaining, revealing the extent to which gendered language and, in turn, expectations infiltrate our lives; even simple swaps of "he" to "she" make clear how frequently positions of power have been and remain dominated by men.

Girly bridges, manly clocks: Though the extent to which language shapes thought is still up for debate, we do know languages with gendered nouns (like Spanish and German) can influence native speakers' perceptions of inanimate objects. Linguist and author Guy Deutscher explored this phenomenon in a 2010 New York Times Magazine article, referencing studies from the 1990s in which Spanish speakers characterized masculine objects (like a bridge, el puente) as having more 'manly properties' like strength," while Germans tended to think of the same objects, which are female in their native tongue (die brücke), "as more slender or elegant."

If gendered nouns can affect perception, it's not a leap to suggest that gendered pronouns do the same. "The gendered assumptions built into the language we use affect the way we see and think about gender and sexism, whether we see women and queer people and people with non-binary genders as people," Grey said. Such language also reinforces "biases by assuming that everyone fits neatly into one of two genders." Men rest atop the hierarchy of the English language, followed by women, with gender-nonconforming individuals relegated to the bottom of the linguistic ladder.

This is part of the reason it's so hard to recognize problematic gender dynamics of male generics; language reflects and reinforces existing patterns of power, and masculinity subsumes "lesser" womanhood all the time in culture. The mindset behind the use of "guys" or "he" or "mankind" is the same that allows women to wear pants — markers of male expression — but mocks men for choosing to embrace feminine signifiers like skirts (exemplified most recently in the "controversy" about Will Smith's 16-year-old son Jaden photographing himself in a dress).

This is also why, "Unless I'm deliberately being ironic," Grey said, "I can't walk up to a group of men and say 'What's up, ladies?' without at least raising a few eyebrows."

Grey said the divisions engendered (rimshot) by male-defaulted language refract throughout society. "There are sports, and then there are 'women's sports.' The blog Sociological Images has a lot of great examples of this — like 'chef coats' versus 'women's chef coats,' because of course the default chef is male."

By encouraging to the needless gendering of products, the male default also becomes a factor behind the so-called "pink tax," wherein female consumers then pay more for "women's" deodorant, ear plugs, razors and so on, despite the fact that, apart from some pastel packaging or flowery fragrances, they're the same product as "men's." In medicine, diagnostic criteria may also be based primarily on male subjects, potentially hurting women whose symptoms aren't always recognized as quickly by doctors.

Perhaps most importantly, using "men" as a synonym for "people" erases female, or simply non-male, personhood. And when the world stops thinking of women and gender non-conforming individuals as full human beings, it's easier to justify both stripping away their right to self determination and the use of violence against them.

Any easy fix: Today, some are using gendered language to draw attention to everyday sexism rather than erase it. Man-fronted portmanteaus like mansplaining, manspreading and manslamming use language to point out the ways many men unconsciously express entitlement to public spaces, for example.

It's clear language can both a force of oppression and revolution, but overhauling patriarchal language systems probably isn't a realistic endeavor. Limiting the use of objectively sexist generics, on the other hand, is. Being more thoughtful with our words requires only a modicum of concentrated effort, and, in fact, might be one of the easiest things we could do to further goals of respect and equality for guys, gals and everyone in between.

Besides, once you start really listening, you hear this language everywhere: The other day I was talking about the word "guys" with a female coworker who, despite being from upstate New York, told me she'd resorted to "y'all" as soon as she began to recognize the societal implications of gendered language.

"It underpins a broader system of sexism," she said. "So I just started consciously trying to avoid it, though I still say it sometimes. Wait, did you just hear that?"

We'd been talking in the office hallway, and at this moment were interrupted by a group of young men and women stepping out of the elevator.

"She just called them all 'dudes'."