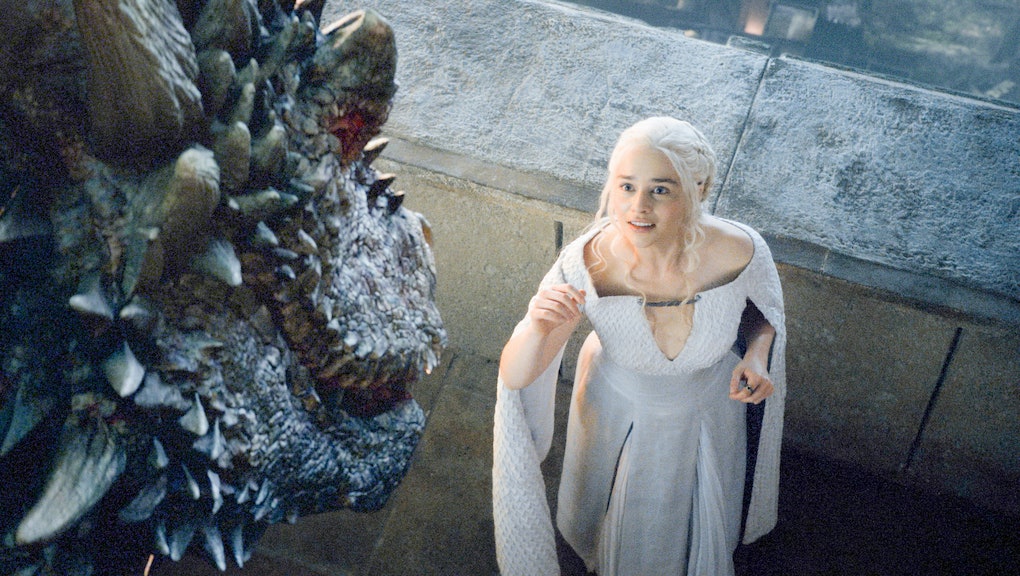 'Game of Thrones' Is Back — And More Feminist Than Ever Before

Of Game of Thrones' many contributions to global entertainment culture, perhaps its greatest is the word "sexposition." Imagined by Saturday Night Live as the fevered result of a 13-year-old boy's attempt to pack premium cable with as many naked women as possible, the HBO juggernaut's tendency to pair palace intrigue with pairs of breasts has earned more than its share of eyerolls, particularly from feminist-minded critics. The show has been derided as "boy fiction," "a fantasy of female subjugation" watched by a fanbase composed of "Dungeons & Dragons types."

Viewers who keep track of such things will be pleased to hear, then, that in the first episode of the fifth season of Game of Thrones, viewers are treated to the gratuitous nudity of three named male characters — and only one topless woman. (Although, to be fair, the men in question are very pretty.) If the first four episodes of premium cable's most popular show are any indication, the women of Westeros are too busy running, ruling and ruining the world to be lounging around in their altogether. Perhaps relatedly, the show is now at the top of its game.

At the beginning of the show's run, the idea that a hard fantasy series featuring dragons, warlocks, ice zombies and twincest would gain any traction — particularly with female viewers — was considered a pipe dream. If the first four hours of the show's latest season is any indication, however, men and women alike can look forward to a new season in which the show's political intrigue, three-dimensional character development, taut battle sequences and stunning visual effects (the Targaryen dragons are so realistically rendered, we actually gasped) have reached new heights.

Who run the world? Girls (with dragons). The conclusion of the fourth season of Game of Thrones set the stage for a major first in mainstream fantasy genre: the depiction of a world of magic, war, sex and intrigue, with a diverse group of strong women at its core. In arc after arc (and there are a lot of them), female characters who were once subjugated because of their gender are picking up the swords of the show's fallen male characters, with compelling results. At this rate, the Westerosi insurrection that began as the War of the Five Kings may end up becoming the War of the Five Queens.

Pint-sized fan favorite Arya Stark set sail in search of vengeance after a creepy kidnapper was given the Evander Holyfield treatment by Brienne of Tarth, a six-foot glamazon who wields a broadsword. Although viewers are still robbed of the opportunity to see the two characters pair up to take on the world, they're each getting to the meatiest parts of their journeys, where their respective goals (vengeance for the murder of a beloved father and that of a gallant king, respectively) are almost within reach.

Meanwhile, Arya's sister Sansa has completed her metamorphosis into Dark Sansa. Sansa, one of the series most divisive characters, had previously been the target of (largely sexist) criticism for being "too feminine," "too easily manipulated" and "crying too much." Formerly a literal punching bag for the show's most loathed character and a chronic self-doubter ("I'm a stupid little girl, with stupid dreams, who never learns!"), Sansa now giving her ambitious "uncle," Petyr Baelish, a run for his money when it comes to deceit. Also, her new raven-black dye job? On fleek.

Cersei Lannister, the wicked brother-loving queen regent (or is it queen mother? Dowager queen? It's a touchy subject in King's Landing), is out from under the thumb of her late father. This time, Cersei has a much less quarrelsome son sitting on the Iron Throne, and a Small Council stacked with partisans willing to do anything for their queen. Cersei's only obstacle? Her fabulous, scheming daughter-in-law Margaery Tyrell. Trust us: The inevitable shade-throwing showdown between the two queens is going to make Dynasty look like Sesame Street.

Across the Narrow Sea, Daenerys Targaryen has settled in for what looks like a contentious reign as Queen of Meereen. Daenerys faces the classic woman's dilemma as she tries to hold her divided city together: work or family? In her case, her "family" is a trio of fire breathing dragons who are great tools of power when they're not incinerating innocent children. In one of last season's most heartbreaking scenes, Daenerys locked up two of her dragons in a catacomb underground, putting the welfare of her people ahead of her family. (#Feminist.)

Game of Thrones being Game of Thrones, of course, the honeymoon doesn't last forever. Four episodes into the show's latest season, beloved characters are imprisoned, kidnapped and murdered. Uneasy lies the head that wears the crown, and the show's queens are almost immediately overwhelmed by the challenges of ruling. Cersei has chased power for so long, she doesn't know what to do with it once it's within her grasp; Daenerys finds that her egalitarian principles aren't always strong enough to keep a fractious city from splitting at the seams.

But who's that, waiting in the wings to take their place? Even more badass female characters. The Sand Snakes of Dorne, the bastard warrior daughters of the late Prince Oberyn Martell (may his sexy spear-spinning soul rest in peace) aren't content with the status quo in King's Landing — and they're aiming their whips, knives and spears straight for Cersei's throat.

It's a woman's world — and the men are getting on board. Bald eunuch spymaster Varys, now on the lam with accused regicide Tyrion Lannister, has primarily functioned as an amusing side character, good for sober indictments of the feudal system of government and bitchy back-and-forth with Baelish. His metronomic insistence that his actions are dictated not by potential personal gain or party loyalty but for "the good of the realm" has made Varys the unlikely moral center of the series. This season, Varys and Tyrion begin a journey that will take them irretrievably from the path of George R.R. Martin's A Song of Ice and Fire novels — both for the good of the realm and for the good of the story.

"The seven kingdoms need someone stronger than Tommen, but gentler than Stannis," Varys lectures another character at the beginning of the season. "A monarch who can intimidate the high lords and inspire the people, a ruler loved by millions with a powerful army and the right family name." Good luck finding him, the listener responds.

"Who," asks Varys, "said anything about him?"