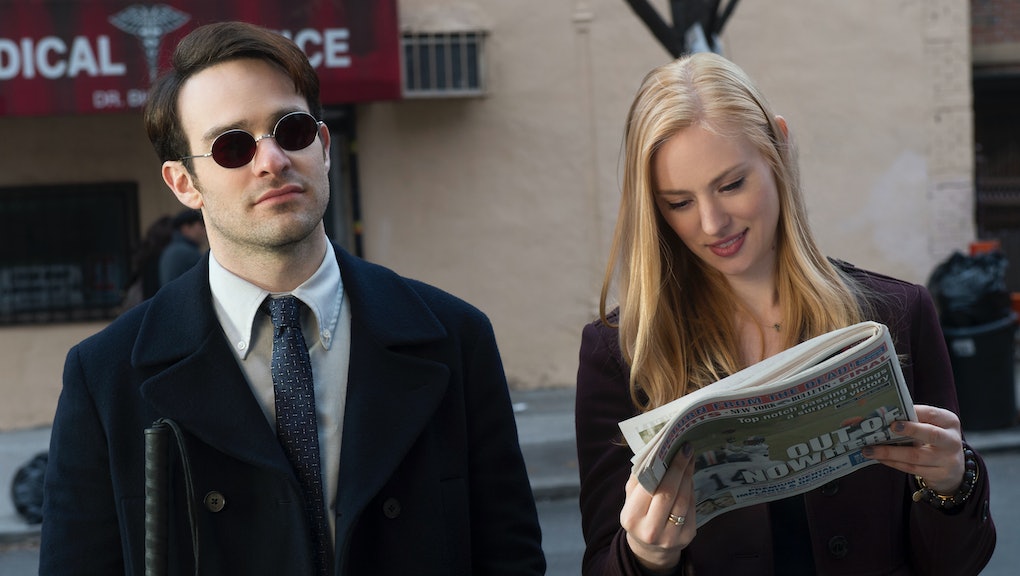 When Iron Man hit theaters in 2008, the superhero film had never looked darker. The Spider-Man and X-Men franchises were partially the cause — each got significantly grittier in their third installments — but the fault laid almost entirely at the feet of Christopher Nolan's The Dark Knight movies. Whether the grit was good is debatable, but with little exception, the superhero genre's tone was pitch black.

Then Robert Downey Jr. smirked and snarked his way into the world in a colorful blaze of glory. With a blast of Iron Man's charm, a swing of Thor's hammer, a song for Captain America and an unprecedented level of success for the movie starring them all, Marvel successfully changed the superhero game.

Yet as indicated by Marvel's Daredevil, the first entry in the comic giant's plan to bring the Marvel Cinematic Universe and which premiered Friday on Netflix, the superhero genre is going dark once again. That's not a good thing.

Daredevil has been adapted before, but not by Marvel's film studios. The last adaptation in 2003 — Ben Affleck's poorly received film version — was produced by 20th Century Fox. That film shared the core story with this series: A blind defense attorney, Matt Murdock, fights for the innocent in the courtroom by day and on the streets at night. It's a simple premise that lends itself well to a TV series.

The tone of this new series, however, is brutal. The show starts with young Murdock being blinded by toxic waste, which is quickly followed by a long, indulgent monologue from an adult Murdock during confession in church. It's a miserable pair of opening sequences, and while what comes after is a bit lighter, this is a series that clearly enjoys living in the dark.

As indicated by Marvel's Daredevil, the superhero genre is going dark once again. That's not a good thing.

Marvel's film universe has been moving a bit toward the dark side since the first Avengers movie, starting with the bleak Iron Man 3 that borrowed much from The Dark Knight. Captain America: The Winter Soldier was great, but it also dealt with much heftier material like government conspiracies and betrayal of friends. Thor's follow-up was even called The Dark World. The one exception to this rule was Guardians of the Galaxy, the Marvel film that feels the most detached from the others.

But Guardians of the Galaxy is the exact reason why this turn toward the dark is so alarming: It indicates Marvel may not know where their strengths lie.

Guardians of the Galaxy made $333 million — in the U.S. alone. Add another $441 million for international grosses and you've got a smash hit. Compared to the significantly smaller domestic grosses for Captain America: The Winter Soldier and Thor: The Dark World and you'll notice a trend: Lighter does better for Marvel in America.

The turn to darker and heavier material is certainly not an indication of the format — The Flash and Arrow on The CW have proven you can do lighter and brighter well for a superhero TV series and be quite successful. Daredevil looks more like Fox's Gotham, which did well enough in the ratings to be renewed for a second season but has performed a bit worse in recent episodes.

Maybe it's just an issue with the source material itself. A story about a boy being blinded and growing up to fight crime in a head-wrap can only skew so cheery. Daredevil itself has lighter moments, though they're hard to pick out among the tougher ones; credit to the series itself for being well-constructed despite how heavy the material is.

That said, Daredevil is a step in the wrong direction. We've had our moment of dark superhero properties — the Dark Knight trilogy was emblematic of that success. But now is the time for something different. It doesn't even need to be a return to what Marvel once was. Going back to the Downey Jr. smirk-a-thon tone feels just as repetitive. If anyone can find out what the next tone should be, it's Marvel. For now, though, Daredevil's tone is a reminder that grittier isn't always better.