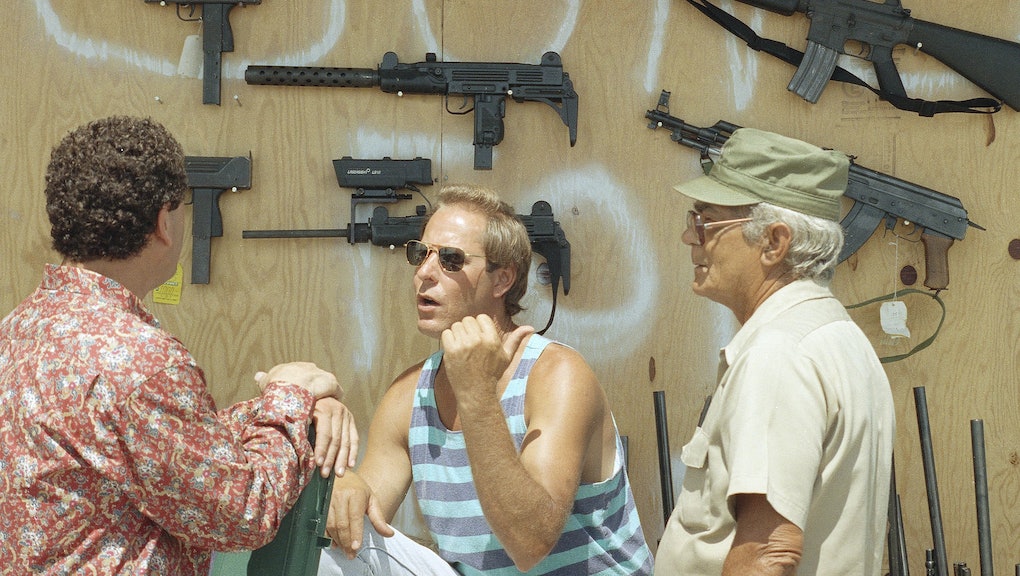 Science Reveals Something Disconcerting About Gun Ownership and Angry People

America is armed, and apparently angry.

That was the conclusion of a new study published in the journal Behavioral Sciences & the Law. The study found that 8.9% of people who reported "patterns of impulsive angry behavior" also owned a firearm. More frightening still, 1.5% of these angry people also enjoyed taking their guns outside.

While 1.5% might not seem like a huge number, it still equates to 3.2 million angry Americans over the age of 25 who may want to take a stroll with their firearm.

The research was conducted by experts from Duke, Harvard and Columbia universities and was culled from an analysis of 5,563 face-to-face interviews, the Los Angeles Times reported.

According to the Los Angeles Times, the study found that of the estimated 310 million privately owned guns in the United States, a disproportionate number are in the hands of people "prone to angry, impulsive behavior."

More disturbing still was the finding that the correlation between gun ownership and compulsive anger was much higher in people who owned multiple guns, the study's lead author, Jeffrey Swanson, told Mic.

"Anger is a normal human emotion," he said. Swanson, a professor of psychiatry and behavioral sciences at Duke University School of Medicine, also stressed he wasn't talking about people who'd had a bad day at work. "People in this risk group did tend to meet criteria for some kinds of psychopathology. ... These are people who get angry and put their fists to the wall."

While there is virtually unanimous agreement about keeping guns out of the hands of the clinically disturbed, Swanson said that those prone to habitual "trait anger," but not at the level of being involuntarily committed, pose the greatest danger.

There's a growing body of evidence raising concerns over gun ownership in America. The study comes after the National Opinion Research Council's recent findings that while fewer and fewer Americans owned guns, those who did were gathering more and more. Taken together, the findings lead to the inescapable conclusion that American gun owners are retracting into a heavily armed and angry minority.

Despite the evidence arguing that more dangerous people are packing more heat, state laws and regulations governing gun violence have almost uniformly moved in a counterintuitive direction. In 2013, President Barack Obama failed miserably at an attempt to revive an assault weapons ban after the shootings in Newtown, Connecticut, that left 20 children and six adults dead. And the Bureau of Alcohol, Tobacco, Firearms and Explosives abandoned plans to ban a type of armor-piercing bullet after a torrent of criticism from the National Rifle Association.

Universal background checks, which the NRA also opposes, only cover transactions by licensed gun dealers. While the National Instant Criminal Background Check System (NICS) has prevented 2 million felons from buying guns, according to the Coalition to Stop Gun Violence, the CSGV estimated that the licensed firearm dealers that run the background checks only cover 60% of overall gun sales.

What to do. "It's not a one thing problem," Swanson told Mic, adding that legal firearm prohibitions need to be more specifically related to indicators of violence.

"If I punch you in the nose and I get charged with assault, I have a record ... that would not disqualify [me] from buying a gun." While individual state laws vary, assault, which is typically a misdemeanor crime, is not among the official prohibitions of the NICS.

Tightening up background checks would, however, do nothing to reduce the number of guns already in potentially dangerous hands. For an answer to that problem, one need only look at California, where in 2014 Governor Jerry Brown signed the "Gun Violence Restraining Order" law. Under its provisions, concerned family members would be able to petition law enforcement to remove firearms currently in the possession of potentially dangerous people.

Nobody who gets so angry that they punch their first through a wall should be allowed to own a gun, let alone multiple ones. If Americans are serious about bending the curve on gun violence, the U.S. needs to come to a basic understanding about who should be allowed to own them. The room for compromise is considerable. If liberals can accept that the second amendment isn't going anywhere, and conservatives can accept reasonable limitations, it could lead to a safer future for everyone.