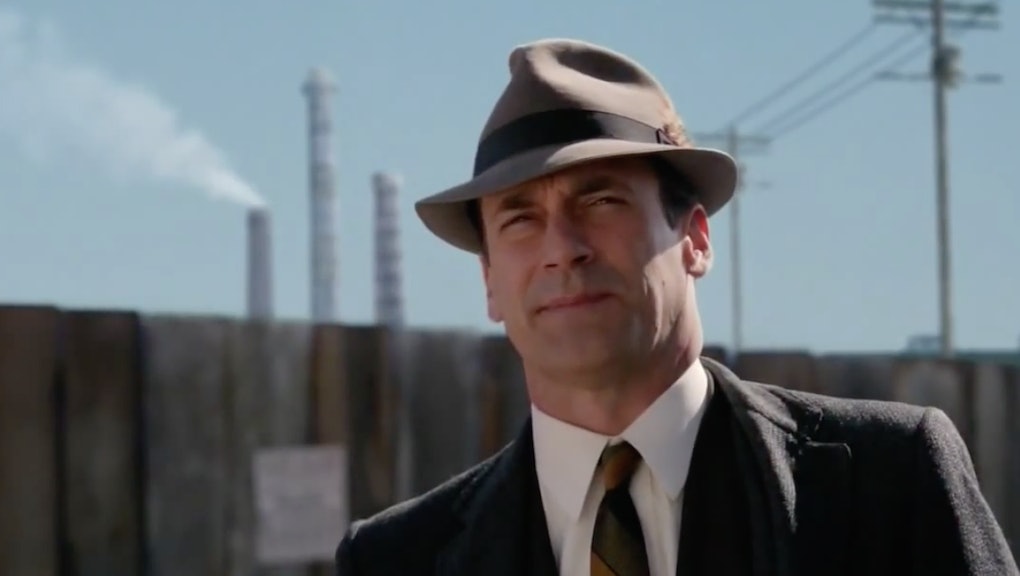 Some of Mad Men's most celebrated scenes are defined by their music — the popular music of the 1960s. The songs do more than just set the mood; like practically everything else in Mad Men, they're symbolic and engage viewers with the characters' emotions in a way that few other shows can accomplish.

That's thanks to showrunner Matthew Weiner and his music supervisor, Alexandra Patsavas, whose other supervisory credits include Grey's Anatomy and the Twilight series. "I listen to music with an ear for how it fits behind dialogue, how a viewer is going to feel when they hear a song," Patsavas told Billboard.

As Mad Men nears its series finale, we take a look at the songs that defined a definitive show.

Season 1: "Don't Think Twice, It's All Right" by Bob Dylan

We hear this bittersweet song during the last scene of the season 1 finale. Don Draper goes home to an empty house, his family having left without him for Thanksgiving. "Don't Think Twice, It's All Right" plays as Don sits alone in the dark as it becomes clear that he's chosen work over family.

The 1962 hit by a young Bob Dylan took from the classic folk tradition in that it was a borrowed melody, despite Dylan's claims of authorship. (To be fair, the original song, "Who's Gonna Buy Your Chickens When I'm Gone," probably wasn't going to resonate as strongly with fans.) The revamped lyrics show a conflicted narrator who's masking his pain with cynicism. Its placement in this episode of Mad Men is near perfection: Don's mammoth pride would never allow him to admit that he's actually in the wrong. Rather than think twice about his morally questionable decisions, he forges ahead under the guise that he really does value work over family.

Season 2: "Early in the Morning" by Peter, Paul and Mary

In episode 8 of the second season, Father Gill sings an acoustic version of this song, a 1962 hit by the folk trio Peter, Paul and Mary: "Well, early in the morning, about the break of day, I ask the Lord, 'Help me find the way.'" It's in this episode that, with the help of Gill, Peggy Olson confronts the decision to put her baby up for adoption; Gill makes it his personal goal to help Peggy come to terms with her "sin."

"Early in the Morning" opens Peter, Paul and Mary's debut album. The trio's breakthrough to the mainstream helped jumpstart the '60s folk revival alongside artists like Dylan. This song in particular, safe for mass audiences in its religious themes, was a crossover gospel-folk success. Its place in this episode of Mad Men not only serves as a reminder of Peggy's pregnancy and its consequences, but also subtly introduces the idea that popular music in the '60s was so important that even a man of the cloth sang along to Peter, Paul and Mary in his skivvies.

The staff of Sterling Cooper gathers in their conference room to watch the famous clip of Ann-Margret singing "Bye Bye Birdie." They're trying to rope in a new client by aping that seductive scene, but Peggy — the only woman in the room — isn't so sure the ploy will get women to buy Patio Cola. When she confronts Don about her doubts that the campaign will appeal to women, he replies, "Men want her. Women want to be her. I'm sorry if that makes you uncomfortable."

The "Bye Bye Birdie" clip is the opening scene from a 1963 movie musical of the same name, based on a Broadway musical. It's set in a high school and is based around a teenage star being drafted into the Army. The song marks the beginning of what becomes a major theme in future episodes of Mad Men: female empowerment. It's a turning point for Peggy too, as we watch her cringe-worthy imitation of Ann-Margret in front of the mirror later in the episode.

Season 4: "(I Can't Get No) Satisfaction" by the Rolling Stones

In the opening of season 4, episode 8, the Rolling Stones' 1965 hit "Satisfaction" plays as Don realizes that (you guessed it) he can't get no satisfaction. In this hilarious scene, Don nearly drowns trying to swim a lap at a sports club, thanks to his cigarette habit. The song starts to build, and then the camera lands on Don outside the club, smoking to the lyrics "He can't be a man 'cause he doesn't smoke the same cigarettes as me." Then two women walk past Don as he rubbernecks to "I can't get no girlie action." It doesn't take a television savant to interpret this one.

The Stones' "Satisfaction" opens with one of rock 'n' roll's most famous guitar riffs, from Keith Richards. According to Rolling Stone, the riff came to Richards in a dream. Also according to the magazine, "[Mick] Jagger admitted that 'Satisfaction' was 'my view of the world, my frustration with everything.'" That frustration lines up seamlessly (if a bit obviously) in this Mad Men episode, as the characters struggle in the midsummer heat to find some satisfaction.

In the season 5 premiere, at Don's birthday party, his new wife, Megan, purrs a rendition of French singer Gillian Hills' 1961 French song "Zou Bisou Bisou." Megan does a sexy dance in front of the party, and the floor is practically covered in drool by the end.

The 1961 original never charted, but as evidenced by this Mad Men episode, set in 1966, the very sexy single still caught on and spread around the world. "Zou Bisou Bisou," according to Vulture, was produced and written by two men who went on to work with the Beatles and the Bee Gees. The scene and its song, according to Weiner, are meant to plant the seeds of tension (sexual or otherwise) that grow between Don and Megan for the rest of season 5.

In the season 6 finale, Don takes his kids to the house where he grew up. "This is a bad neighborhood," Don's son says warily as his dad steps out of the car. As Don says "This is where I grew up," Judy Collins' 1968 recording swells, and the camera pans to show a dilapidated house.

Though Collins popularized the song, "Both Sides Now" was actually written by Joni Mitchell in 1967. Mitchell told the Los Angeles Times that she wrote the song while reading Saul Bellow's Henderson the Rain King on a plane. It wasn't until a year later that Collins took on the song and won a Grammy for her performance. The song is about how clouds, like life, have the potential for both light and darkness; in that way, it's the ideal song to play as Don's children realize that their father's life was once very dark.

Season 7 (Part 1): "The Best Things in Life Are Free" by Jack Hylton

Bertram Cooper sings this song, originally from a 1927 musical, in his final scene on Mad Men. Or rather, he sings it in Don's imagination: Just after Bert's sudden death, Don has a fantasy about his mentor and sees him sing and dance along to the old showtune "The Best Things in Life Are Free."

The original is from the musical Good News, about a university football team and its students' dramatic, lovelorn journeys. Luckily, the actor who plays Bert, Robert Morse, has a background in stage singing. According to Weiner, the song served one function. "It is a very simple song with a very simple message: Life is bigger than business," he told the New York Times. In a rare glimpse of humanity, "The Best Things in Life Are Free" acts as a surprisingly earnest song that makes Don question his priorities.

In episode 6 of the final Mad Men season, Peggy and Don commiserate about familial failures in Don's office as "My Way" by Frank Sinatra slowly builds in the background. "What do you have to worry about?" Peggy asks Don. He replies, "That I never did anything. And that I didn't have anyone." The emotional scene builds to a slow-dance where neither Peggy nor Don take the lead.

This 1969 Sinatra hit was one of the last recordings before his pseudo-retirement, and he notoriously and publicly admits to hating the song. "I hate this song. I hate this song! I got it up to here [with] this God damned song!" he told an Atlantic City crowd in 1979, according to the Wall Street Journal. Sinatra may have hated the song, but its place in this episode of Mad Men likely serves one straightforward purpose: To highlight that, as Don and Peggy have struggled with their power roles over the years, it's finally Peggy's turn to take the lead — and she's doing it her way.