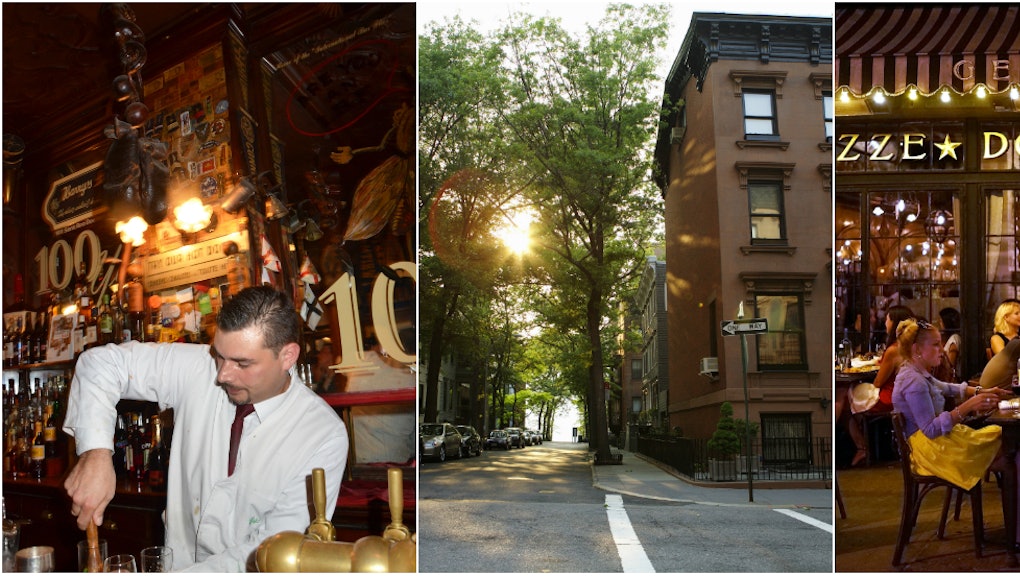 New York City gets a bad rap when it comes to dating. The conventional wisdom is that, despite the supposed riches of single people, everyone in the Big Apple is too self-involved, too picky or too "busy." The variety should be great, but as one single New Yorker wrote into Gothamist, "I have met interesting, attractive, not insane people but they all seem to be flakes."

But let's be honest: Is there any other city more fun, more diverse and with more potential to date in? There's a reason thousands of people move to New York City each year (the population has grown by over 161,500 since 2010, according to U.S. Census data).

It might not be obvious to the most cynical daters, but if you look hard enough and shake off the pessimism, the beauty of dating in New York City becomes clear.

1. We meet people who share our "New York dream."

Alicia Keys wasn't kidding. "You meet people here who share a New York dream, and we bond over making certain sacrifices to plug in to a hive whose power can't be fully understood," says Angela*, 31, "and that's hot."

People move to New York City because they have a dream to be something or someone else than they were before — or at the very least, they are willing to endure the struggle of high rent, small spaces and cramped commuting. Either way, it's a struggle New Yorkers share and can bond over, especially when drowning their sorrows over after-work drinks.

2. New York is a melting pot, making dating an adventure in different cultures and experiences.

Transplants make up the majority of New York City residents: According to Furman Center's State of New York City's Housing and Neighborhoods, 14.4% of New Yorkers were born somewhere else in the U.S., and 37.2% were born in another country.

With so many transplants from other parts of the country and world, New York City is diverse in every way you can imagine — professionally, ethnically, financially, culturally. That might mean culinary adventures in Queens or an Italian opera in Brooklyn or even just an eye-opening conversation with someone who hails from a continent you've never been to. Dating in New York City can mean encountering the unfamiliar in the best ways possible.

3. You can date someone who hasn't dated someone you know.

Although the fact that single women outnumber single men in New York City creates a challenge for straight women (especially when we get down to ratios per borough and neighborhood), the odds of meeting someone new, gay or straight, are assumedly still higher than in other cities.

In "New York's technologized dating scene," as the New York Times put it, potential dates are at your fingertips at any moment. There are about 1 million Tinder users in New York City, making it the largest market of any American city, the company told the New York Times. If you cast a wide net (or swipe right a lot), the chances of dating someone who dated someone you know are incredibly small.

4. We don't have to worry about impressing parents.

Seeing as most of us are transplants, we don't have to worry about meeting the mom and dad of our dates anytime soon. Which is a relief because that aspect of dating is stressful as hell.

5. Going on a date in Times Square is like traveling to a foreign country.

For most New Yorkers, the brashly bright Times Square is a nightmare, a neighborhood (if you can call it that) to be avoided like the plague it is. But all that avoiding render it a foreign country, which isn't a bad idea for an adventurous first date.

6. It is possible to go on a date that doesn't cost a fortune.

"I moved to New York City right in the middle of street fair season, and since I didn't have much money at the time, paying $1 for three falafel balls or a lemonade was like hitting the lottery. Not to mention the free movies too," Ben, 34, told Mic. "Even though I make more money now, summer remains my favorite time of year to go on a date. There's something adventurous about scouring the city for delicious deals."

Walk past a bakery on a nice day and you'll find yourself a free sample. Even before Bryant Park and McCarren Park start their free summer movie series, there's something else free to do in New York City. Always.

7. Dating pushes us to discover the best spots in the city.

That great cocktail lounge where you threw your birthday party? The fun karaoke bar you take your coworkers to? The to-die-for pizza place that everyone always overlooks but you've made a habit? You found them all on dates.

As Elise, 26, told Mic, "I don't see a bad first date as a failure if I ended up going to a great spot I can take my friends back to." Multitasking — it's the ultimate New Yorker move.

8. Dating in New York City can be entertainingly highbrow.

It's not just about fancy dinners or the theater. A study of the words used the most in online profiles, by state, found the most common word on New Yorkers' profiles was "museum." (Other states' common words: "farm," "hunting" and "grilling.")

Furthermore, a recent survey on dating app Zoosk, shared with Mic, found that when it comes to online dating conversations, "'Drinks' were most mentioned in New York and least often in Los Angeles." So there's that.

According to AM New York, the hottest jobs in NYC for 2015 include app developers, translators, film editors, event planners and child care workers. A look at the most popular companies in New York City shows a variety that includes hospitals, advertising firms, universities and, of course, Random House, because who isn't working on their first novel these days?

Because of the diverse professions and businesses only found in New York City, you may find yourself on a date to a movie premiere or a gallery opening, as several singles attested to Mic. A dinner party with a legendary artist or a Broadway star sitting across from you? Only in New York City.

10. We can reinvent ourselves over and over to suit the date.

We can go out with industry people and be the person who's all about their job, then the next night go out with someone outside that sphere and step out of that professional identity for a night. Natalie, 29, put it best:

"Before I got engaged, I'd been dating in New York City for almost eight years ... and I came to realize that here, you can be whomever you want and I'd have fun with that, especially if the date definitely wasn't leading to a second one ... I'm a chameleon, and can easily alter myself to fit in to any situation. I think that's what New Yorkers do best."

11. Dating in New York isn't just about meeting others, it's about self-discovery.

"I'm the person I am today because I was smart enough to move to New York City in 2004," said Lyndsay, 33. "It's the people I've met, the places I've gone and the relationship I've had with the city itself that has defined me."

You go to new places, try new things and push outside your comfort zone in order to grow, not just in the relationship but within yourself. The unfamiliar dance party, the hard-to-navigate neighborhood, the date with the accent you couldn't understand: Each encounter, large or small, pushes you a little in ways you might not have predicted.

Even if the dates don't work out, you've gained new knowledge of the city and of yourself.

* Some names have been changed to allow subjects to speak freely on private matters.