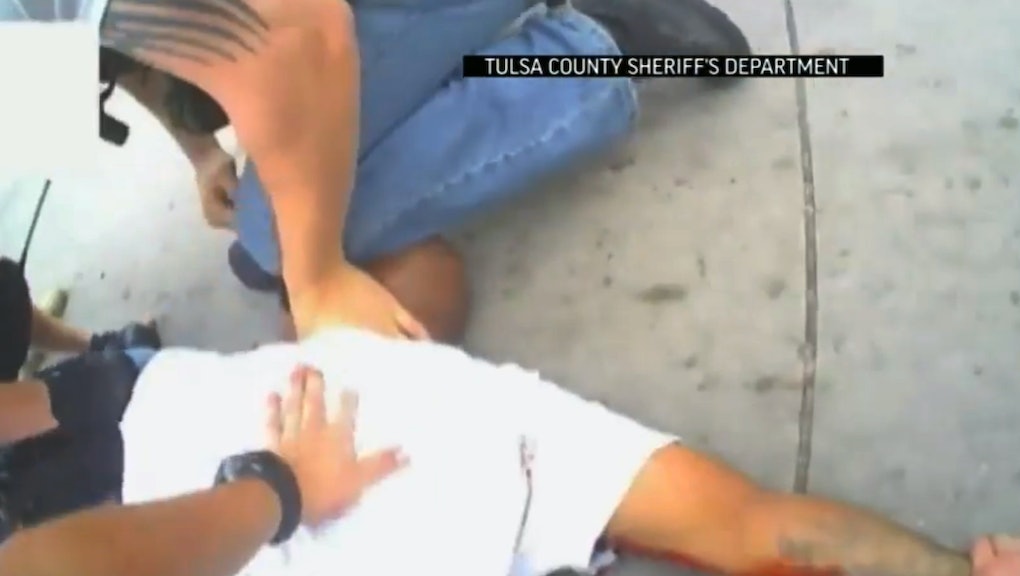 On Friday, the Tulsa, Oklahoma, sheriff's department released a video showing officers chasing down 44-year-old black man Eric Courtney Harris, who they alleged had tried to illegally sell them a weapon. In a story that's become all too common, the unarmed Harris was shot and killed. This time, the person responsible was 73-year-old reserve deputy Robert Bates.

Bates said he thought he had been reaching for his stun gun but instead drew his gun and shot Harris.

Now, a comment from Tulsa police Sgt. Jim Clark shows that the rationalization has begun.

"It is my opinion, after reviewing all the facts and circumstances of this case, [Oklahoma's excusable homicide statute] was applicable in this incident," Clark told a group of reporters Saturday, according to the Los Angeles Times. "Reserve Deputy Bates did not commit a crime. Reserve Deputy Bates was a victim, a true victim, of 'slips and capture.' There's no other determination I could come to."

Read that again: "Reserve Deputy Bates was a victim, a true victim."

"Slips and capture" errors occur when an officer, typically under stress and with insufficient training, essentially pulls the wrong weapon by mistake. The theory was instrumental in the acquittal of a California transit officer who shot and killed an unarmed man in 2010.

Bill Lewinski, the executive director of the Force Science Institute who testified in that trial, told PoliceOne.com that "these are mistakes that are made when you think you are doing one thing but you actually are doing another and the result often is directly opposite of what you intended. In effect, your intended behavior 'slips off' the path you wanted it to go because it is 'captured' by a stronger response and sent in a different direction."

Ok... Maybe. But that still does not explain why officers moved to arrest the man rather than seek immediate medical attention. While officers claimed they didn't know Harris had been shot because they didn't hear the gunshot in "in the heat of the moment," it doesn't explain why they ignored Harris when he told them he had been shot.

Furthermore, while Clark may have named Bates' actions excusable homicide, Lewinski told PoliceOne.com that slips and capture errors can be tied to inadequate training. Bates, a 73-year-old reserve sheriff's deputy, is not a police officer but an insurance executive. Nevertheless, he had a gun.

So while "slips and capture" may have emerged as the official line, Twitter isn't buying it.

Ultimately, we should expect more from the police. Officers are armed and given the task of protecting a community's people, so it's not wrong to hold them to a higher standard when they execute that responsibility. Anyone given a firearm in the service of law enforcement has to be accountable for their actions. While Bates' response may have been an honest mistake, he still caused a man's death. An accidental shooting still creates a victim, and it's not the person holding the gun.

The true victim in Tulsa, from every angle, is the unarmed man lying dead. It is important to remember that.