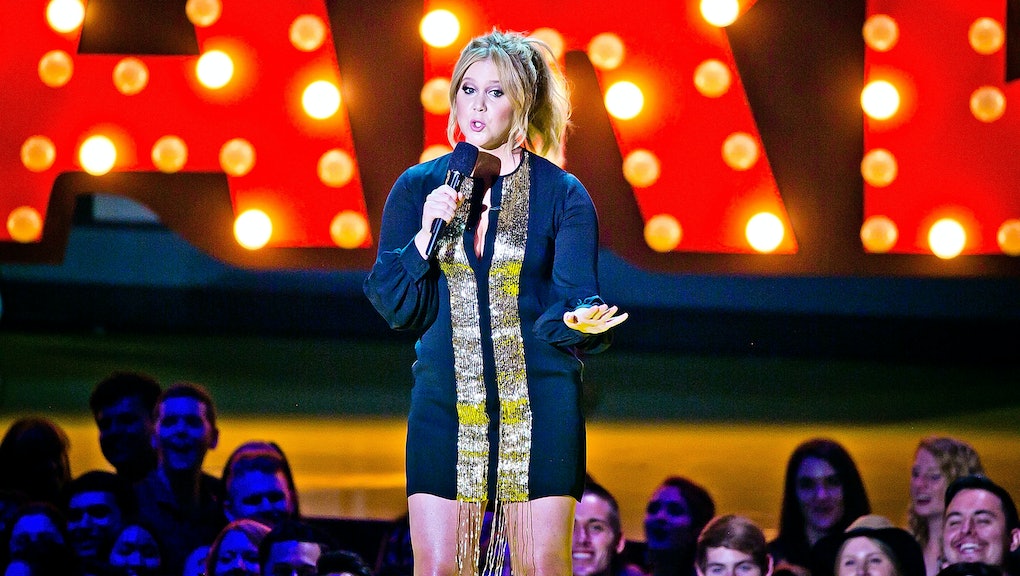 When it comes to real talk about sex, comedian Amy Schumer is leading the way.

"Magic Mike XXL. It like, really is magic," she said.

"Anytime I watch those guys, at least two of my fingers disappear."

While Schumer's "two finger" joke might be written off as just a clever nod to an upcoming film, it's also a send-up to a topic that doesn't get nearly enough air time in most comedians' repertoires.

And it wasn't just the Magic Mike XXL quip. In a promo video for the awards ceremony released last Friday, Schumer imagined a scenario in which women flock to movie theaters alone, not for the latest romantic comedy, but for a night of solo pleasure courtesy of Fifty Shades of Grey, Magic Mike XXL and lots of phallic accessories.

In the short video, Schumer runs into several friends who have the same idea as her. She hilariously admits to having "bought two seats next to each other so I can sit on the armrest," while her friend confesses she brought her Clarisonic and shower head for her viewing pleasure. The pièce de résistance? Amber Rose carrying in a vibrating bag that sounds like "rattlesnakes."

As the movie theaters let out, dozens of women leave, each carrying a unique sex toy and looking sweaty and satisfied.

But there's no reason not to talk about something so common. In 2014, the National Survey of Sexual Health and Behavior and FiveThirtyEight found that 84.6% of 25- to 29-year-old women had masturbated at least once.

Which is why Schumer's jokes matter: The more we acknowledge and destigmatize the behavior and see women's pleasure as just as valid as men's, the better off we'll be. The MTV Movie Awards draw millions of young viewers, which makes it the perfect platform to talk positively about female sexuality.

Later in the ceremony, Schumer thanked the cast of Magic Mike XXL for "making it rain in my Spanx." We have Amy to thank for getting hilariously honest about a subject usually limited to men. Feeling good about yourself and enjoying a hot film aren't limited to any specific gender — just ask Anna Kendrick.