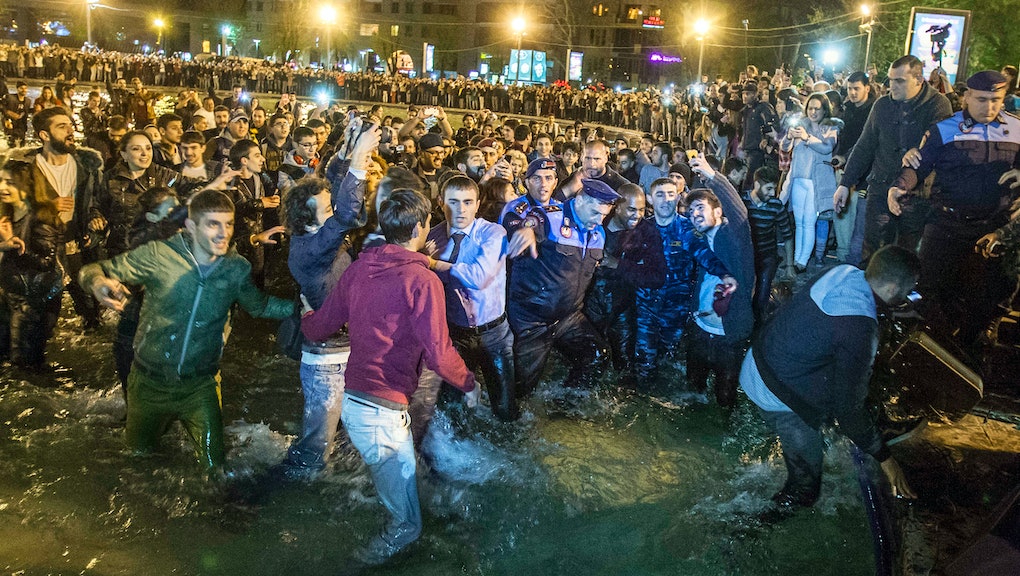 Kanye Really Out-Kanye'd Himself During a Surprise Armenia Show

On Sunday night, Kanye West held a very last-minute show in Yerevan, Armenia, where the rapper was traveling with his wife, Kim Kardashian. Kardashian, whose ancestors are Armenian, tweeted Sunday afternoon that Kanye would perform a surprise show in downtown Yerevan next to Swan Lake that night.

Then things got Yeezy.

After opening with "Stronger" and going through a short set list, Kanye said to the crowd, "We're going to do something different right now." He belted out the first few words of "Good Life" then jumped into Swan Lake mid-sentence, microphone and clothes and all — and it turns out Yeezus can't walk on water.

The crowd loved it and surged forward into the lake, surrounding Kanye in a water mosh pit. Before long, the police shut down the show. Luckily, Armenian news caught it all on camera:

Everyone seemed to be having an incredible time, despite Armenian officials' initial concerns that Kardashian's visit would disrupt the status quo.

"At the beginning people were uncomfortable with the Kardashian visit; after all, this is a conservative society," historian Vahram Ter-Matevosyan told the Guardian. "But Armenia has never been discussed in the mainstream media like this before. This discourse shows that Armenian identity is still alive."

In the end, Kanye did Kanye and the Armenian crowd couldn't get enough: