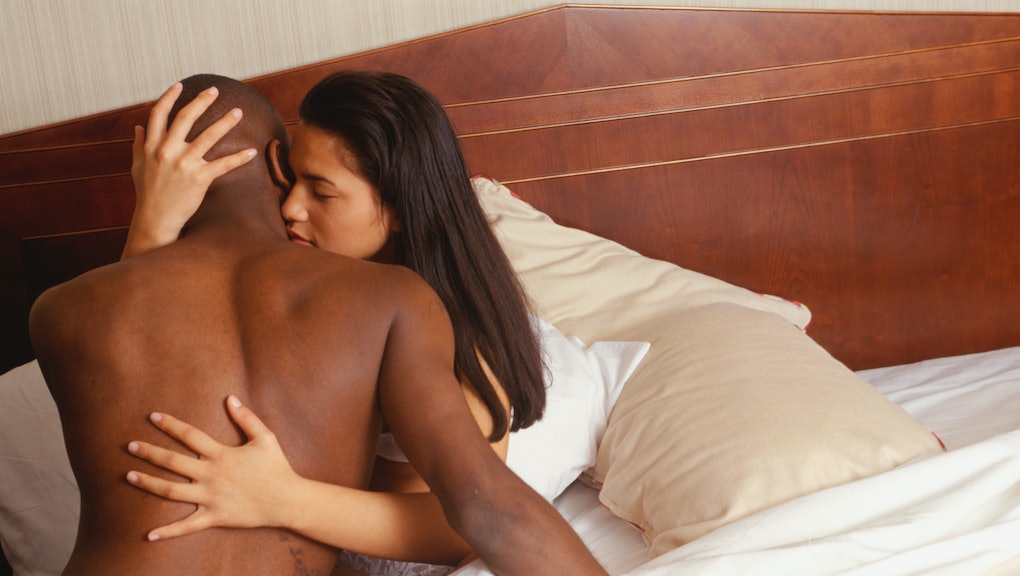 There's One Simple Way to Tell Whether You're Good in Bed

In a recent Reddit discussion, user BinarySolar posed a question that hits at a near-universal insecurity: What makes women good in bed?

The answers ranged from "oral ability" to "not being a dead fish," plus this fairly reasonable response: "Just asked four guy friends and they all said 'enthusiasm.'"

But really, the debate over what makes a man or woman "good" that's unfolding on Reddit, not to mention in Cosmopolitan, on Internet forums and among our friends after a few glasses of wine, boils down to one simple truth.

What makes someone good in bed? Whatever makes them and their partner feel good.

The easy way to know if you make your partner feel good? Speak up and listen to the person in bed with you.

A popular insecurity: We tend to talk about sexual performance as if there were a definable set of sexual skills, ones that could be studied, practiced and ultimately mastered — as long as you know where to start. Our cultural neurosis over mastering these runs deep: "Am I bad in bed?" is one of the first autocomplete options in a Google search for "Am I bad..."

A look at Google Trends shows that the number of searches for "bad in bed" has steadily increased over the past 10 years. While this increase can't be attributed to one event, as millions of us increasingly turn to the Internet to answer our problems, our deep-seated vulnerabilities — including those about our sexual capabilities — are clear.

Publications from Cosmopolitan to BuzzFeed have picked up on that worry, offering lists and quizzes that determine whether you're good in bed, based on questions about everything from number of sexual partners to knowledge of sex positions.

The problem? Each time we venture to answer whether we're "good" or "bad" in bed, we reinforce the idea that there's a right way to have sex — or at least certain ways that are better than others.

Confusing "unskilled" with "ignorant": The experience of being with people who are "good" or "bad" isn't just imagined. A 2009 study conducted by researchers at the University of Kansas found that of 281 participants, 28% of men and 67% of women had faked an orgasm during penis-in-vagina intercourse. Why fake it? Because they knew it just wasn't going to happen; both men and women (25% of women and 7% of men) reported having difficulty achieving orgasm because their partner was unskilled, according to the Guardian.

But faking an orgasm because our partner can't get us there misses the point: Most likely our partner isn't "unskilled," they just don't know what's going to work for us. And by faking it instead of letting them know what we need — with anything from understanding our anatomy to acing proper stimulation — we set our partners up to be "bad in bed."

As Michelle Ruiz, senior editor at Cosmopolitan, previously explained the "orgasm gap" to Mic, "Chances are, people aren't communicating in bed about what works for them."

Talking as the best skill of all: That's why being able to communicate is actually the most important "skill" to bring to bed. That isn't easy, of course. "Talking about desire can feel more intimate and vulnerable than the act itself," sex educator Kate McCombs told Mic. "When we aren't having the conversations about what's working and what isn't, it's easy to be insecure."

Sure enough, researcher E. Sandra Byers found in a 2011 literature review that the average adult only knows about one-fourth of what turns their partner off in bed, as reported by Psychology Today. On the flip side, a 2012 study found that those who talk about sex more in bed often experience more sexual satisfaction.

Being good in bed also means being flexible — no, not that way — about what you can provide your partner, according to Debby Herbenick, PhD, associate professor at Indiana University and author of The Coregasm Workout. "Too many people are convinced that a technique that worked for an ex or one that they read about in a magazine is the best way to do it, whether that's a sex position or oral sex technique," Herbenick told Mic. "If someone doesn't like the way you're doing something, believe them! It's their body and their preference."

It's easier than we think: In talking with Mic, one twenty-something male said, "What I really wish was that I could have someone film me having sex, blur out my face, and then I could post it to a forum to get tips on how to improve." He wondered aloud about the privacy aspects of a set up like that.

Or, you know, he could just ask his partner.

When it comes to almost anything having do with sex, we tend to complicate rather than simplify. Really, the answer to "how to be good in bed" is usually lying in bed next to us.

This article was originally published on April 13, 2015