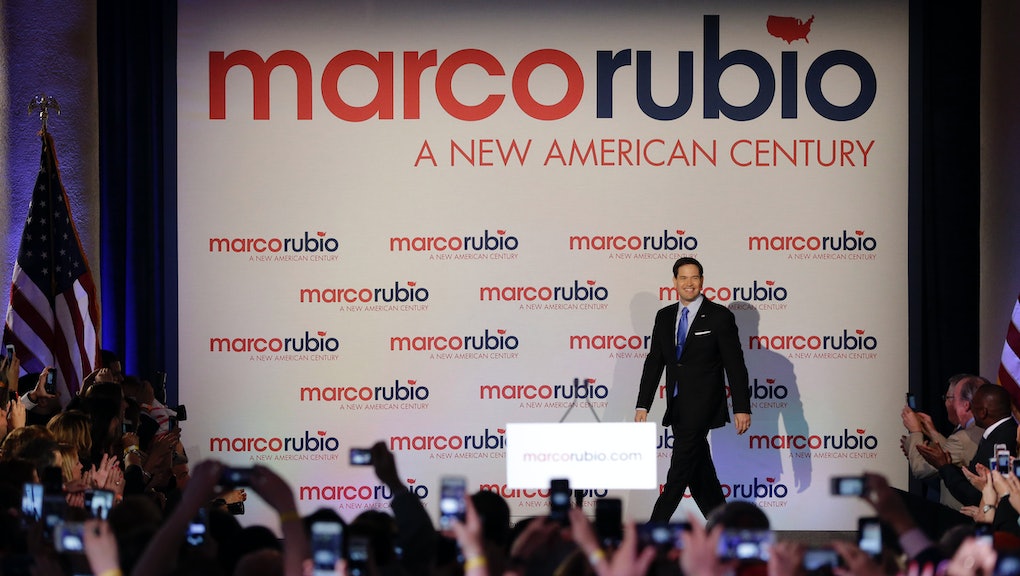 Florida's Sen. Marco Rubio is joining the 2016 presidential field Monday night, the third Republican to declare himself a candidate for the party's nomination. The 43-year-old son of Cuban immigrants cast the coming election as a "generational choice" and his campaign as the one "to lead the way toward a new American century," during a speech at Miami's "Freedom Tower."

Rubio is hoping his relative youth will set him apart from the two frontrunners, including his political mentor, former Florida Gov. Jeb Bush, 62, and Hillary Clinton, 67, who announced her bid for the Democratic nomination on Sunday.

"Just yesterday, a leader from yesterday began a campaign for president by promising to take us back to yesterday," Rubio said, in reference to Clinton. "Yesterday is over and we're never going back."

The decision means that Rubio will be leaving the Senate, as Florida law only allows state officials to run for one office per election cycle. Elected in 2010, Rubio's current term ends in 2016.

Here's where Rubio stands on five issues most important to young people in the coming election:

On the student debt crisis

Rubio is no stranger to the problem of student debt — he still owed about $100,000 when he was sworn into the Senate in 2011. "At one point in my life, it was the single highest expenditure in our personal budget," he told CNBC in 2014. As Fusion notes, it took Rubio "16 years and a book deal" to pay off the more than $150,000 in debt he incurred as an undergrad at the University of Florida and law student at the University of Miami. He didn't make his final loan payment until 2012.

As a policy matter, Rubio has worked to make college affordability a key piece of his legislative portfolio. He worked last year to craft a bill that would adjust the repayment schedule of federal borrowers and limit their payment obligations to 10% of monthly earnings. He also co-sponsored another measure, known as the Investing in Student Success Act, which was, as Rubio told CNBC, "designed to create a legal framework so we can encourage more entities, more investment groups to step into this field and help people with an alternative to the college loans that we currently have."

The bill hasn't made any progress in Congress, but expect Rubio to make his policies on affordable education a big part of his pitch to young voters.

On marijuana decriminalization and legalization

"If there are medicinal uses of marijuana that don't have the elements that are mind-altering or create the high but do alleviate whatever condition it may be they are trying to alleviate, that is something I would be open to," Rubio told the Tampa Bay Times in July 2014. Included in that select group are "noneuphoric strains such as 'Charlotte's Web,'" he said.

Though he has not yet laid out a detailed agenda, there is reason to believe that a President Rubio would threaten federal intervention in states, like Colorado, which have voted for and enacted laws to end marijuana prohibition. Rubio is the only candidate in the 2016 field to call for federal law to be enforced in those states, telling ABC News and Yahoo News he does not believe there is a "responsible way to recreationally use marijuana."

For Rubio, the question of whether he has ever tested the product remains an open one.

"If I tell you that I haven't, you won't believe me," he said in an interview Fusion in February 2014. "And if I tell you that I did, then kids will look up to me and say, 'Well, I can smoke marijuana because look how he made it.'"

Immigration is perhaps Rubio's most problematic issue. On April 18, 2013, he stood beside Sen. Chuck Schumer (D-N.Y.) and six others — the so-called "Gang of Eight" — to formally present a bipartisan comprehensive immigration reform bill. The controversial legislation, composed with the support of the White House, would have provided immigrants living in the country without documentation with a path to citizenship. The tea partyers who helped vault Rubio into the senate in 2010 were not pleased.

When the bill stalled in the Republican-dominated House of Representatives, never even being brought up for a vote, Rubio changed tacks. Or he flip-flopped, depending on your view of it. Either way, Rubio now rejects his own bill, instead advocating for a piecemeal approach that immigration activists have almost unanimously rejected as insufficient to solve the growing crisis.

Rubio recently joked to CNN after an ugly scene with protesters — both conservatives who opposed the original plan and activists who are angry at him for abandoning comprehensive reform — that he is one of the few politicians who is heckled "by both sides of the immigration debate."

Rubio opposes gay marriage, and has sharply criticized federal court decisions that have legalized same-sex marriage in the states. Following a federal court's ruling in January that legalized gay marriage in his home state of Florida, Rubio voiced his displeasure in an interview with Politico: "While I believe that marriage should be between one man and one woman, while people want to change that law — and a lot of people apparently do – there is a way to do that. You go through the legislature, or you go on on the ballot, but I don't agree the courts have the power to do this." Speaking to CNN a week later, Rubio said that Americans should respect the Supreme Court's ruling on the issue, which is due in June.

Rubio's position is not far out of step with the rest of the rest of the likely GOP candidates, none of whom support gay marriage. Notably, he's spoken out against discrimination against gays, and has recognized that gay couples may "feel humiliated by the law's failure to recognize their relationship as a marriage."

On whether climate change is man-made

Rubio found himself in hot water last year, when he told ABC's Jonathan Karl, "I don't agree with the notion that some are putting out there, including scientists, that somehow, there are actions we can take today that would actually have an impact on what's happening in our climate. Our climate is always changing."

He later tried to clarify his remarks by saying that he believes climate change is real, while avoiding the question of whether it is being caused by humans. In any event, Rubio said that he is "all in favor of advances in technology and innovation that makes us cleaner and more efficient," but opposes any bona fide action, like a cap-and-trade regime, that would put a price on carbon emissions.

Rubio might not be convinced of the cause of climate change, but he would be wise to recognize its effect — Florida is one of the states that is most vulnerable to rising sea levels caused by climate change.