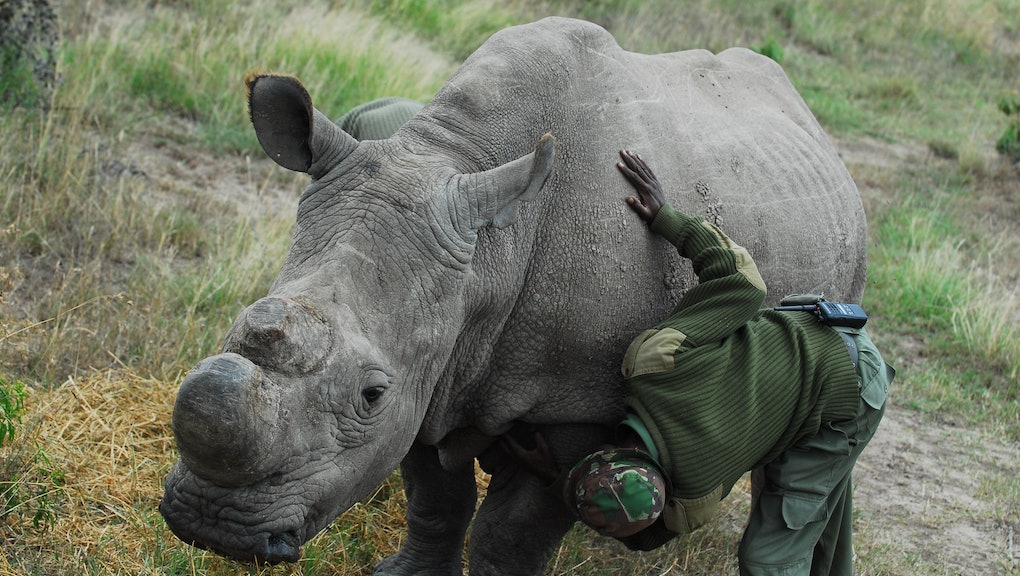 Sudan and two females, Najin and Fatu, live together in captivity in Ol Pejeta Conservancy, a wildlife sanctuary in central Kenya. As the world's last remaining male northern white rhino, Sudan occupies an exceedingly delicate position in the animal kingdom: Without him, the subspecies will completely die out, which is why he's on 24-hour armed guard to prevent poachers from capturing him.

The Independent reports Sudan is equipped with radio transmitters to track his whereabouts for heightened security. Elodie Sampéré, the conservancy's marketing manager, told the Dodo that he had his horn removed as a precaution to deter potential poachers. Rhino horns are highly sought after by poachers; they sell for enormous sums in Asia, where they're thought to cure "everything from hangovers to cancer," according to National Geographic.

"If the rhino has no horn, he is of no interest to poachers," Sampéré told the Dodo. "This is purely to keep him safe."

Sudan, Najin, Fatu and Suni, another male, were originally housed at the Dv?r Králové Zoo in the Czech Republic, but were transported to Ol Pejeta in 2009. Suni died in October 2014; Angalifu, another male living at the San Diego Zoo Safari Park, passed away in December 2014. Two other females are currently being kept in captivity, bringing the subspecies' grand total to just five worldwide.

Previous attempts to breed Sudan with one of his two female companions haven't been successful. As National Geographic notes, rhinos typically reproduce well in the wild, but not in captivity. According to Matthew Lewis, the senior program officer for African species conservation at the World Wildlife Fund, artificial insemination is the only option left.

"The only chance we're going to have full northern white offspring is artificial insemination," Lewis told National Geographic. "But so far, this method has proved to be very difficult in rhinos."

Poachers have decimated the population. Like other critically endangered species, rhinos — both northern whites and other subspecies — are at the (nonexistent) mercy of ruthless poachers. The global rhino population is at risk, and species in Asia and Indonesia are seeing declines as a result of both poaching and habitat destruction.

But it may be worst in South Africa. In 2007, just 13 rhinos were poached in South Africa; by 2011, that number had increased to 448, and by 2013, it topped one thousand. According to Save the Rhino, a nonprofit dedicated to rhino preservation, 2014 saw 1,215 South African rhinos killed by poachers — one every eight hours.

"Things really aren't getting better, despite the [seven] years this crisis has been going on," Richard Thomas, global communications coordinator for TRAFFIC, a wildlife-trade monitoring network, told National Geographic. "It really does call for some major action."