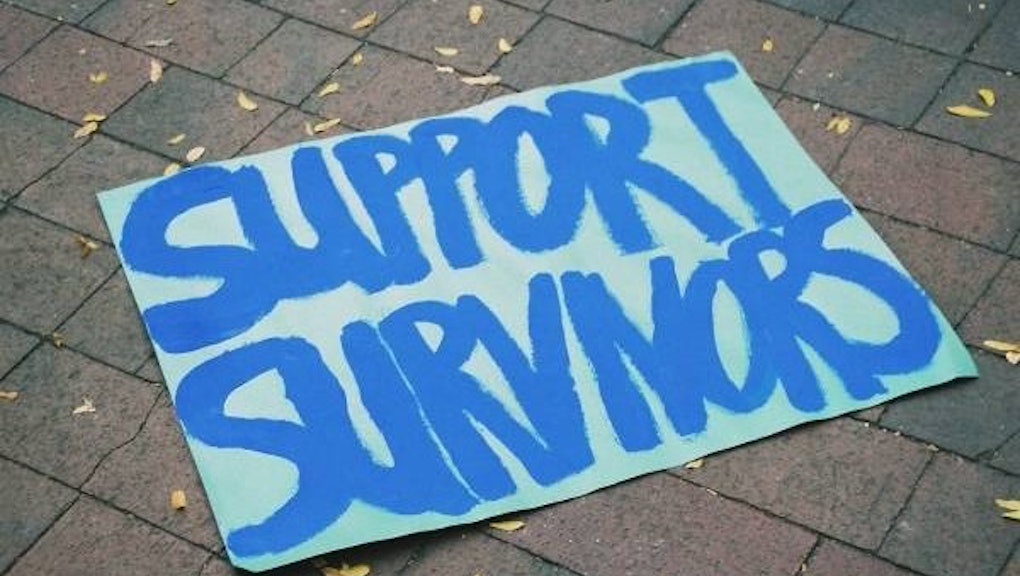 "There are many reasons why someone might not want to report being raped — and they should never be erased," xoJane contributor Marianne Kirby wrote in 2013. The writer made this bold statement after reading the comments posted to a previously published piece, "It Happened To Me: I Was Raped By My Tattoo Artist." The piece detailed the writer's sexual assault and subsequent decision not to report it.

"PLEASE do something to save other women from this predator," one commenter wrote. "You definitely need to report him," another responded.

The woman who was raped by the tattoo artist is hardly the first woman to deliberately choose not to report her assault. In fact, 68% of sexual assault survivors will never report the crime, according to RAINN.

But many people — like the aforementioned commenters — have trouble accepting this. It's yet another way in which our culture tries to dictate how sexual assault survivors should react to the traumatic experience, in addition to criticizing how survivors interact with their assailant, doubting the veracity of their claims and beyond. We largely fail to recognize that many survivors would rather avoid the inadequate systems of reporting that make dealing with a criminal investigation difficult, and that they have every right to do so.

We need to better educate others about why survivors don't report. One major reason, for instance, is that reporting often retraumatizes survivors. Though police officers ideally exist to help survivors seek justice, officers also often blame survivors for their own assaults — that is, if they believe the survivor's claim that the assault happened at all. Even when studies confirm that survivors rarely lie about experiencing assault, investigators can take on an accusatory tone.

"When you've already gone through the trauma of assault, very often you are too tired or too exhausted to really put yourself through another sort of assault, in a sense, because you might talk to an officer who is victim-blaming," activist Wagatwe Wanjuki explained to Mic.

Considering their rapist will likely never see a day in jail (just 2% of reported rapists ever do, according to RAINN), potential mistreatment by police does not seem worthwhile to many survivors. Besides, the reporting process is tiring. Its length may vary from case to case, but can last a significant amount of time. Given all this, Wanjuki affirmed, "many people just want to move on with their lives."

Dana Bolger, founding co-director of the national, student-driven campaign to end campus sexual violence, Know Your IX, agrees. "Many survivors choose not to go to the police simply because nothing in the criminal justice process is set up to support them as survivors," she told Mic. This is demonstrated by the fact that many states' laws still don't protect some victims at all — such as those whose assailant is the same sex as them, or male survivors — nor do many states recognize particular forms of dating or domestic violence, such as cyberstalking.

Survivors' pre-existing relationships to their assailants can complicate reporting as well. Because approximately 85% to 90% of survivors know their attackers, according to the National Institute of Justice, Wanjuki explained to Mic that survivors may be in "a little denial" about what happened and may be hesitant to "ruin the rapist's life."

People of color have an especially problematic relationship with reporting crimes to the police. Many survivors come from communities that are already heavily policed, Bolger noted, including survivors who are immigrants, people of color, queer or transgender. These individuals may abstain from reporting because they fear deportation or criminalization themselves. "Who do you turn to for protection when the state itself has perpetrated violence against you?" Bolger asked.

Wanjuki also observed that many police officers — consciously or not — maintain biases against women of color based on stereotypes that they are hyper-sexual or "un-rapeable." Because about 90% of rapes are intra-racial, many survivors of color also don't want to "put another person of color in the system when it comes to the police because [the assailant] might not be treated well," Wanjuki said.

Assaults that occur on college campuses in particular are further complicated by campus-specific racial dynamics.

"As a black woman who was raped by a black man at a predominately white university, there was also this hesitance to report because I felt reporting and coming forward was essentially reinforcing the stereotype of the black man as a rapist," Wanjuki told Mic.

We therefore need to question our reporting systems — not survivors' decisions to engage with them. Given how flawed this system is, it's clear that reporting is not the right choice for all survivors. Bolger agrees. "Anybody who's been through something so traumatic and painful doesn't have an obligation to do anything but take care of themselves," she asserted.

We must instead focus on creating "a society and a culture that makes people feel more comfortable coming forward," Wanjuki said. "We need to urge our systems that are in place to treat survivors better, we need to recognize that survivors know what's best for them in the aftermath of their assault and we need to respect them and their decisions and their journey to healing."

We also need to think beyond these systems altogether. Some survivors question whether jail — arguably the expected outcome of reporting to the police — is an adequate solution or form of justice given the violence and racism that the prison system perpetuates. "We need to really sit down and think about how can we promote accountability while also respecting a survivor's idea of what justice is in the aftermath of their assault," Wanjuki said.

For these reasons, and many more, the conversation about reporting assault must change. Instead of regarding reporting as an additional duty or responsibility with which survivors are burdened, we must view it as an indication that our culture desperately needs to be better educated about the experience of surviving assault. We need a broader cultural shift in which the conversations surrounding sexual assault prioritize the needs and perspectives of survivors over those of their accused assailants.

Wanjuki agrees. "I think we need to move away from continuing to focus on survivors," she told Mic. Instead, we must, once and for all, "tell rapists not to rape instead of telling survivors that they have to report."