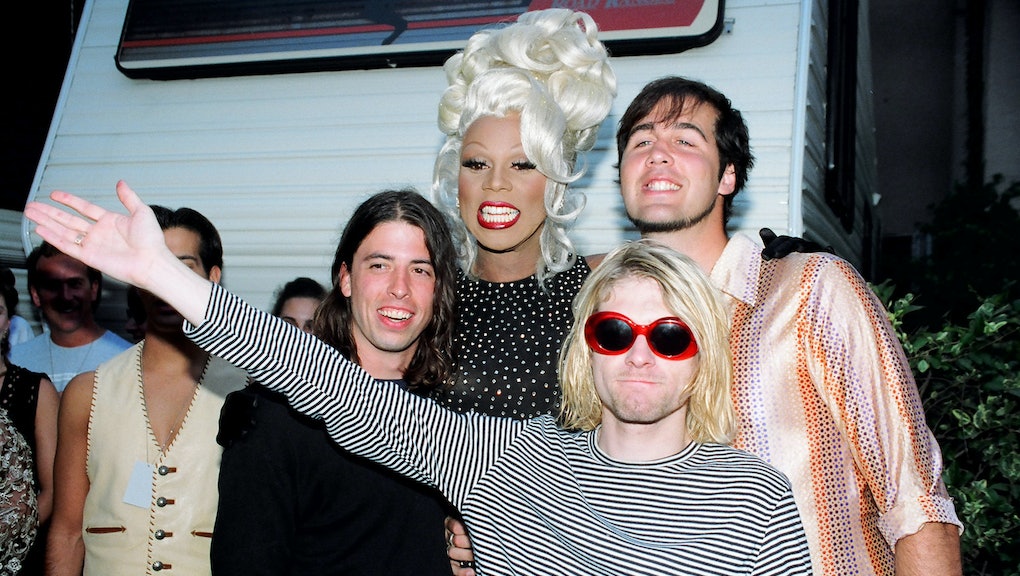 From day one, everything about Nirvana screamed rock legend, and it's a legend that's persisted. The trio perfected the angst-filled rebellion anthem, to the point where they're still the archetype for tortured rock stars. To this day, the band is lionized as the ideal in new books and documentaries "often rehashing the same ideas and now-iconic photos," as Pitchfork wrote with a sneer last March.

Nirvana is the last true rock phenomenon. But their massive success came at a price. The band proved grungey alternative rock could be big business, incidentally opening the door for the Nickelbacks and Creeds of the world to dominate the airwaves. Nirvana's genius turned rock into a billion-dollar industry — something the genre may never recover from.

The domination. Nirvana emerged at a perfect juncture when, rock and roll was re-evaluating its direction. "It came right at the end of the death knell of hair metal and the world was screaming for rock music that would be meaningful again," Charles R. Cross, author of the Cobain biography Heavier Than Heaven, told Today. Nirvana's "Smells Like Teen Spirit" was that revolution.

Cobain wrote it to be the "ultimate pop song," though its anti-materialistic, anti-establishment lyrical content was anything but. "It was such a cliched riff," Cobain told Rolling Stone in 1994. "It was so close to a Boston riff or 'Louie, Louie.' When I came up with the guitar part, Krist [Novoselic] looked at me and said, 'That is so ridiculous.'"

The song became an uncontrollable cultural phenomenon anyway. It launched Nirvana's album Nevermind to the top of the charts, unseating Michael Jackson and moving so many copies the label couldn't keep up with demand. Every industry sought to capitalize off the grunge aesthetic. "Flannel shirts and torn jeans found their way onto Manhattan fashion runways," Jamie Allen wrote for Salon. "Movies like 'Wayne's World' mocked slackers while taking their money. Commercials used the word "dude" far too often." And major labels started investing in a lot of astronomically shitty "grunge" bands trying to duplicate Nirvana's irresistibly rebellious sound.

To his eternal credit, Cobain saw the influence his music was having on mainstream culture and tried to stem the spread. He began refusing to play "Smells Like Teen Spirit" live, or "purposefully performing it sloppily, just to mess with the audiences he cynically saw as flocking to Nirvana shows just to hear that song while it was flavour of the month," Al Horner wrote for NME.

Nirvana's next and final record, In Utero, was far more dissonant and inaccessible than its predecessor, a likely attempt to shake the pop audiences they'd gathered. As former NME writer Keith Cameron put it: "Kurt didn't want to sell records to cunts." But that was fine with the majors, because other bands would.

The next Nirvana. After Cobain's death, major labels began desperately searching for the "next Nirvana." They mined the hell out of the Seattle scene looking for another hit band, signing underground acts left and right. Pearl Jam, which Cobain once described as "pioneering a corporate, alternative and cock-rock fusion," became the new grunge. "Knock-off bands," like Candlebox, Stone Temple Pilots and Silverchair, as Kyle Anderson described them in his book Accidental Revolution: The Story of Grunge, "stormed the barricades."

"They sold millions," Anderson wrote. "But were as empty as the hairmetal bands their forefathers fought so hard to vanquish."

Nirvana's surviving members are well aware of their sins. In an interview with the Guardian, Krist Novoselic claimed: "We had punk-rock values, but we signed those papers," referring to their band's major label deal. He nodded to alternative acts at the time that remained independent, Fugazi and Pavement, saying "I could never face them again."

Dave Grohl, Nirvana's drummer, admitted the same in a previous interview hosted by Spinner. "We fucked up an awesome underground scene 20 years ago," he said, according to Ultimate Guitar. "Maybe we shouldn't fuck up the next one." Grohl placed his comments within a hopeful context. "20 years ago, everything was ruled by these major labels, but there was this really cool underground scene flourishing in its independence," he added. "There is something about the independence that the Internet has given musicians that makes me feel hopeful for the future."

Grohl is onto something. Today's up-and-coming rock bands don't need to rely on labels to distribute their music, and can thereby avoid the need to sanitize their sound for radio. There's still incredible, subversive alternative, punk and even some grunge thriving on sites like Bandcamp and SoundCloud. It just operates underground, where it began before Nirvana brought it into the limelight. Maybe that's where it belongs.