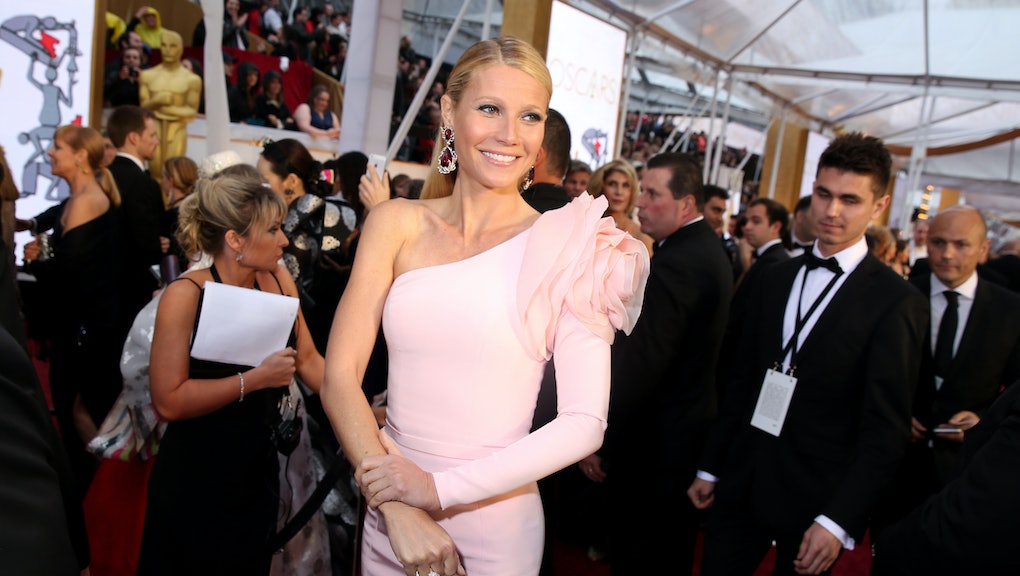 Actress Gwyneth Paltrow isn't quite in touch with economic reality. That's evident from one look at the prices in her lifestyle site Goop's shop. To her credit, Paltrow has tried to combat that image in the past, most recently by taking her chef friend Mario Batali's Food Bank NYC Challenge.

Batali designed the challenge to prove the difficulty of living on only $1.38 per day and prevent any further Congressional budget cuts to SNAP (the Supplemental Nutritional Assistance Program, or food stamps). As an attempt to raise awareness of the importance of SNAP, Paltrow's attempt to live on $29 for a week was a good-natured effort. The result of said effort, however, does little to combat the idea that she's out of touch.

As the Frisky deduced, the caloric content of the items Paltrow bought is underwhelming. "People who live on SNAP benefits don't just have to get nutrients, they have to get actual calories," Rebecca Vipond Brink writes on the Frisky. "They tend to have very physical lives, doing service labor and taking care of children and not necessarily being able to afford a car and so forth."

The total number of calories provided by Paltrow's cilantro, avocado, limes and more hits a total of just over 7,000 calories, as calculated by Brink. Five of the items — lettuce, scallions, cilantro, jalapeño and kale — have virtually no caloric content at all. A thousand calories a day might be fine for Paltrow, who has the option to not be physically active every day. But a woman similar in stature and size who takes care of kids and has no car would be significantly undernourished by Paltrow's vitamin-heavy selections.

That's not the only reason Paltrow's purchases are unreasonable. Families living on food stamps also don't necessarily have a Whole Foods right down the street, or a similar fresh food market. The U.S. Department of Agriculture estimated 23.5 million people are living in food deserts, or what the Agriculture calls "urban neighborhoods and rural towns without ready access to fresh, healthy and affordable food." Most of the food nearby is processed or fast food.

There's a reason why figures in politics have tried and failed to take similar challenges in the past: It's hard enough to accomplish for those in the most privileged situations. Paltrow's out-of-touch tweet merely revealed the uglier truth lying beneath. For those without privilege, living on food stamps is almost impossible, especially if there are further budget cuts.

As one could expect, Paltrow is receiving a great amount of online flack for this. The truth is that Paltrow was likely trying to do something good here, with no malicious intent. Raising awareness about the tightness of SNAP's budget is a noble cause; ironically, by putting together such an oblivious selection of items, she might have done more for raising awareness than had she done the challenge well.

Yet Paltrow needs to realize how out of touch she is. If she wants to pursue projects like Goop and make herself out to be an instructor on how to live a healthy, fulfilling lifestyle, she has to understand the plight of the average person. Her food bank challenge attempt is just another indicator Paltrow doesn't quite get it.