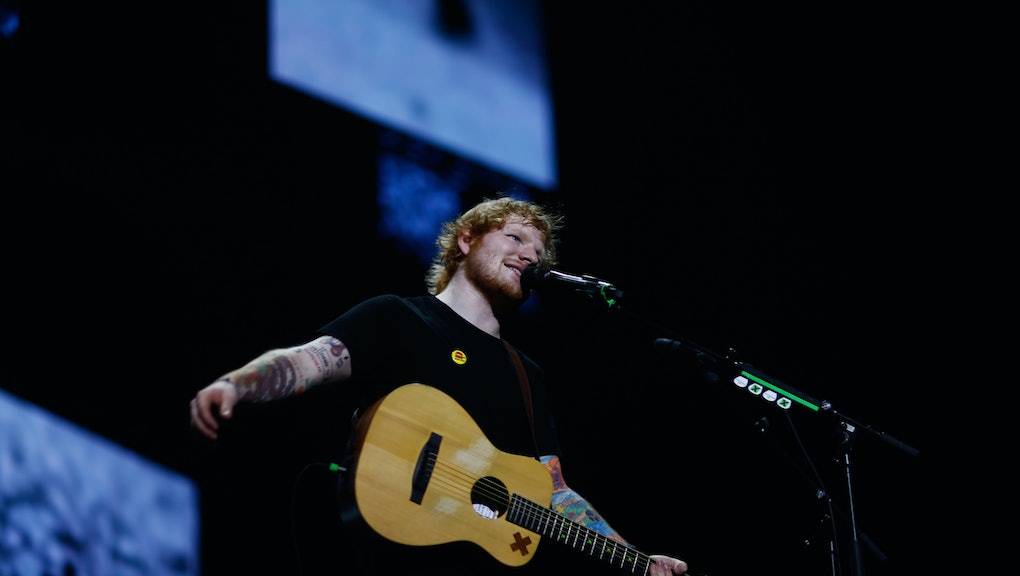 Spotify Data Reveals What You Secretly Suspected About Ed Sheeran

Ed Sheeran has been called many things since he launched himself into the limelight four years ago, and "boring" sums up about most of them. But it turns out that the bland sound he's cultivated is good for something — sleeping.

According to Spotify, Sheeran is the most slept-to artist on the service, with his song "Thinking Out Loud" appearing on 2.8 million "sleep"-themed playlists. Seven Sheeran songs appear on the top 20 "most-streamed sleep songs globally." Let's all celebrate with a nap.

It's an accolade even Sheeran saw coming. "I don't think anyone wants to dance to the sort of words I have to sing," he told MTV. "They just want to cry and eat ice cream."

In April 2014, a psychologist from the University of Cumbria in England found that the best music to sleep to is "90 beats per minute, a 4/4 beat, piano and strings and narrow note sequences where the notes moved from low to high," LifeHacker reported.

"Thinking Out Loud" has nearly all these elements. After the first verse, when the listener thinks Sheeran is going to launch into a rousing pop chorus, he quiets down with the line "Place your head on my beating heart." And he soothes them back into another downy soft verse.

So 2.8 million people consider Sheeran to be a singing pillow. But no one can say he hasn't found his niche. He even turned a Rick Rubin beat (the man behind Jay Z's "99 Problems," Kanye West's Yeezus, and the Red Hot Chili Peppers' Blood Sugar Sex Magik) into a snoozefest: The Rubin-produced "Tenerife Sea" is No. 14 on the most-streamed sleep songs.

This news helps put Spotify's previous announcement that Sheeran's X was the most-streamed album of 2014 in context. People were sleeping to it, not listening.

But he isn't sweating it.

"A lot of people think I'm boring — I think other people are boring," Sheeran said, responding to accusations that he was too boring to headline the Isle of Wight festival, according to NME. "It's fine and that's a normal thing to think. I don't really mind that much."

And he shouldn't. Sheeran is getting paid. A stream is a stream — a royalty is a royalty — whether people are listening or sleeping to it.