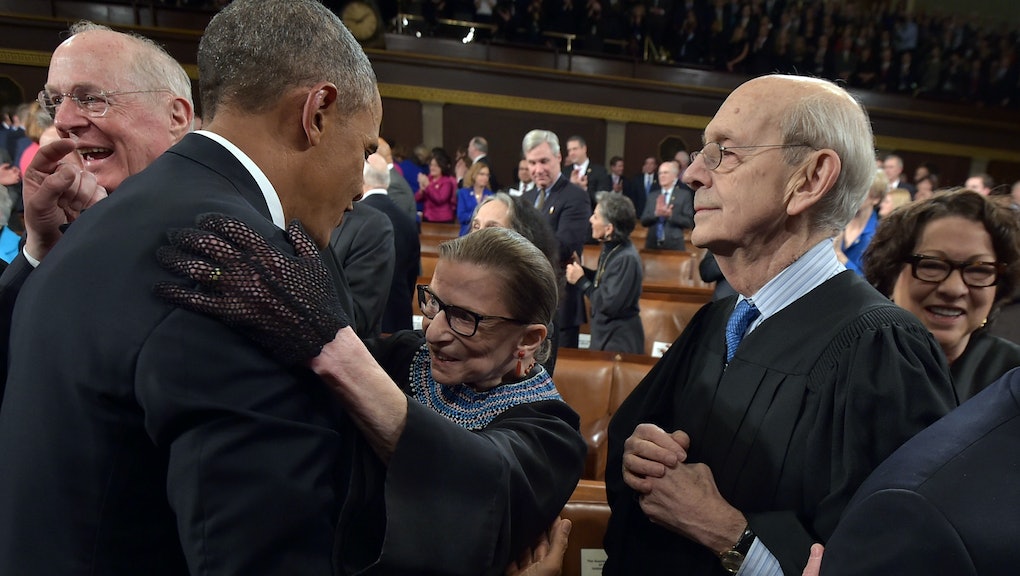 Supreme Court Justice Ruth Bader Ginsburg has become a liberal cult icon over the past decade, her unique personal reserve and eloquence ignited by a fiery judicial progressivism. She is also 82 years old, as of a month ago.

Three of Ginsburg's colleagues are similarly advanced in age. Justice Stephen Breyer, another liberal stalwart, is 76, while the nine-person court's usual swing vote, Justice Anthony Kennedy, will be 79 this summer. Conservative firebrand Justice Antonin Scalia has spent nearly 29 of his 79 years on the Supreme Court. Only Scalia has said that he plans to stick around much longer.

Given the court's growing stature as the final arbiter in political battles between Republicans and Democrats, along with its own increasingly partisan nature, their replacements will be imbued with a level of power and authority almost unparalleled in American judicial history. And it is progressively more likely that the person who gets to decide what that future court looks like will be the next president of the United States.

What's on the line: This spring and early summer, the court will rule on two major cases involving marriage equality and the Affordable Care Act. The health care case, which featured a last-ditch legal end-around from desperate opponents, was argued on March 4. If only by a narrow majority, the court is expected to rule in favor of the administration, likely ending the long legal fight over Obamacare for some time. The same-sex marriage question is even less controversial — by this summer, after decades of debate, marriage equality is likely coming to all 50 states.

But even as those hot-button issues recede from their places at the center of our political drama, the Supreme Court can expect to hear cases about at least five more generational debates currently percolating in lower courts or the halls of Congress.

1) Marijuana prohibition: This is the most obvious and inevitable candidate for a date with the justices. There is a clash today between state laws in the states that have legalized weed for recreation or medical use and the federal policy, which outlaws both. For the time being, the Department of Justice has decided to stand down and let states proceed as they see fit. But there will be a reckoning. At least two potential Republican candidates for president — Sen. Marco Rubio (Fla.) and Gov. Chris Christie (N.J.) — have said or hinted that they would seek to enforce federal law in states like Colorado and Washington. That kind of clash, with its roots in constitutional issues of federalism and states' rights, would fast track the issue to Washington, D.C.

2) Mass surveillance: At issue here are First and Fourth Amendment rights. On March 10, the Verge reported the Wikimedia Foundation was filing a lawsuit against the National Security Agency over its "upstream" spying on U.S. citizens who would reasonably hope to use Wikipedia, the online encyclopedia, anonymously.

"The NSA intercepts and searches virtually all of the international text-based traffic that flows across the Internet 'backbone' inside the United States," Wikimedia's Jimmy Wales and Lila Tretikov wrote in a New York Times editorial explaining their case. "This is the network of fiber-optic cables and junctions that connect Wikipedia with its global community of readers and editors."

The Supreme Court that ultimately decides if NSA activity and Justice Department complicity violate free speech and assembly guaranteed in the Constitution will look a lot different than the one we see now. It will be up to that next president to decide who will make these generational choices.

3) Abortion rights: In 1973, the court ruled in Roe v. Wade that federal law protects abortion as a fundamental right. In the more than four decades since that decision, rendered by a 7-2 majority, anti-choice activists have rallied and lobbied and, eventually, set on a course to chip away at the law through state legislatures. Now, local and state governments routinely pass legislation that make it practically impossible to obtain abortions without actually making them illegal.

In Texas, for instance, the law now requires abortion clinics to have quick access to local hospitals — rarely an option in a sprawling state like Texas — and bans procedures after 20 weeks of pregnancy. There are now just 16 legal abortion providers in the entire state, according to RH Reality Check, a women's rights advocacy group. Kansas, another state ruled by a hardcore conservative governor and legislature, made it illegal to have a common abortion procedure during the second trimester. It was the first state to go so far.

While these states have been careful not to put any language into these laws that would run into a direct conflict with the 1973 ruling, they are clearly in defiance of the spirit of that landmark decision. Expect a number of lawsuits to bubble up in the coming years arguing that legislation like we've seen in Kansas and Texas legally undermines the law of the land.

The list goes on: The future of election law, including serious questions about the role of money in government, and what lawmakers can and cannot do to combat climate change will both be discussed in the high court in the coming decade.

So when we talk about who will take over from President Barack Obama in the White House, we should also be thinking about who the candidate is likely to choose to replace the Supreme Court's aging justices. That decision could well be the 45th president's most consequential action.