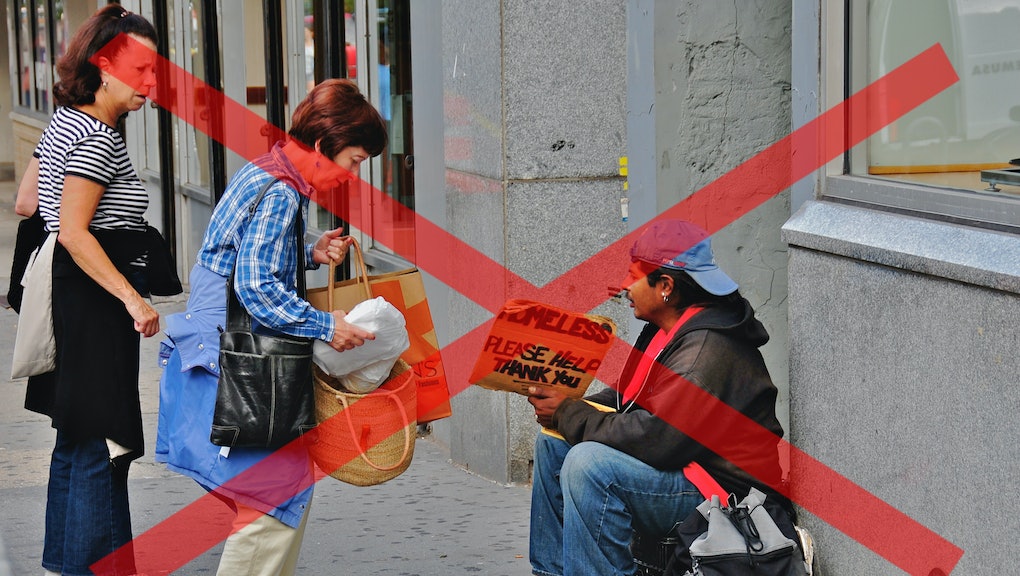 7 Reasons Every State Should Make Homelessness a Crime

The best way to solve a problem is to make it illegal.

It works with everything: underage drinking, marijuana use, speeding, consuming too much trans fat. Now, there's a growing wave of cities across America applying the same logic to chronic homelessness. Don't want homeless people sleeping in public? Make it a crime, homelessness solved. Boom.

A surprising number of cities and states nationwide are taking this approach, including San Rafael, California, whose mayor closed a public park for a month in order to lift people out of extreme poverty and prevent them from attending meth-fueled dinner banquets.

And that's just the tip of the proverbial iceberg:

In all, 1 in 10 cities nationwide has a law prohibiting residents from giving homeless people food, 53% of American cities prohibit sitting or lying down in certain public places and 43% of cities prohibit someone from sleeping in their car.

This is exactly what America needs to fight homelessness. To see why, look at what's happening in Utah, Phoenix and other places that are taking a radically different approach, giving free homes to the homeless in a program dubbed "Housing First."

Ever since they started treating the chronically homeless like actual human beings, Utah and Phoenix have become nightmarish hellscapes. The data doesn't lie:

1. Utah started giving out homes to the homeless in 2005. Chronic homelessness is now spiraling out of control.

2. Phoenix took the same approach with veterans, and now the city is simply falling apart.

3. It gets worse, the program is bankrupting Utah!

Soon, it's going to have to start exporting the salt from its lakes just to pay off its debts.

4. Other states, like Florida, would waste a ton of money if they enacted such a radical approach.

5. Just look at Denver, it would never be able to afford such a crazy concept.

6. New York City would run out of money if it tried this.

7. There's absolutely no way this would work, if we tried it nationwide.

Steve Berg, vice president for programs and policy at the National Alliance to End Homelessness, is crazy enough to think it's possible. "If the money is on the table, communities take it and end chronic homelessness," he told Mic.

What a lame idea.

Glad we cleared this up!