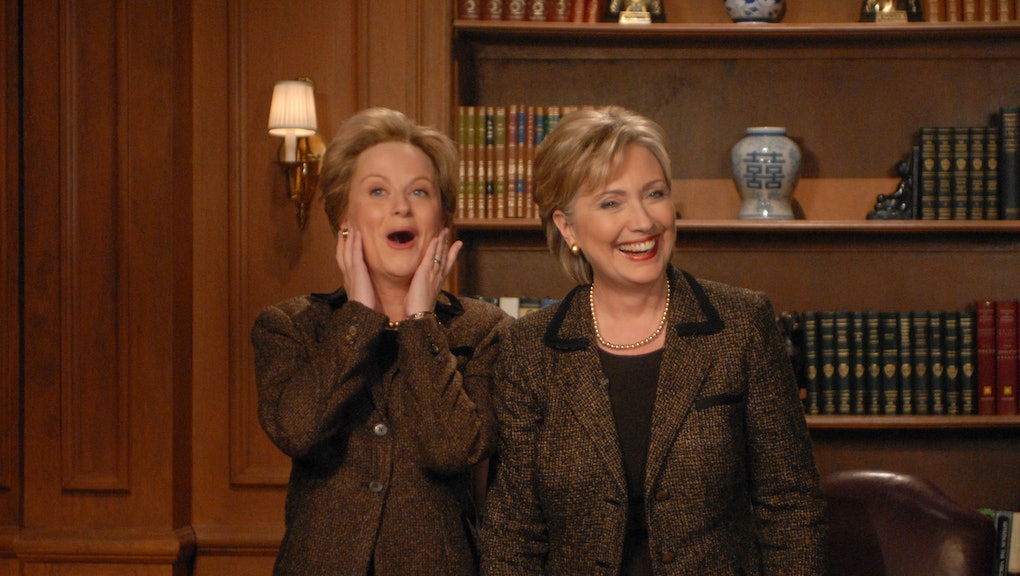 The success of Hillary Clinton's candidacy may depend on how Kate McKinnon portrays her.

As the presidential election season ramps up so does Saturday Night Live's satire of the candidates. This year, the show's leading female impersonator and first openly gay lady, Kate McKinnon, has portrayed Clinton twice, both times fetching the public's — and critics' — resounding approval.

If this is true, and McKinnon's send-up is "far more effective," then Clinton is in big trouble. Because SNL, for better or worse, is a significant political influencer when it comes to America's presidential elections.

The difference between Poehler and McKinnon is feminist comedy. Poehler's impersonation was from a point of view universally embodied by women; the satire was effective because she, as Clinton, was always "punching up" at the glass ceiling. Even though Poehler indulged us with Clinton's peccadillos, the audience understood that her annoying laughter and frustrated outbursts were a product of the sexist system that continuously impedes her as an older, mainly serious woman.

On the other hand, McKinnon's portrayal of Clinton is a gross exaggeration, not of the former secretary of state as a female politician in a "man's world" but of the sexist stereotype depicted by the media. McKinnon's Clinton indulges the conservative, misogynistic fantasy of the former first lady as a conniving, power-hungry beast of Shakespearean proportions.

McKinnon's portrayal emerges from a sexist core; Poehler's a feminist one. McKinnon's impersonation glorifies the media's relentless sexism against Clinton by depicting her through that sexist frame.

That a male critic at the Daily Beast calls Poehler's impersonation "toothless" signifies the typical misogynist reaction to women's experience of everyday sexism. For women, however, that portrayal struck a cord because Clinton's eye-rolling exasperation with the system was something we've all felt — and the resulting anger that we have is anything but "toothless."