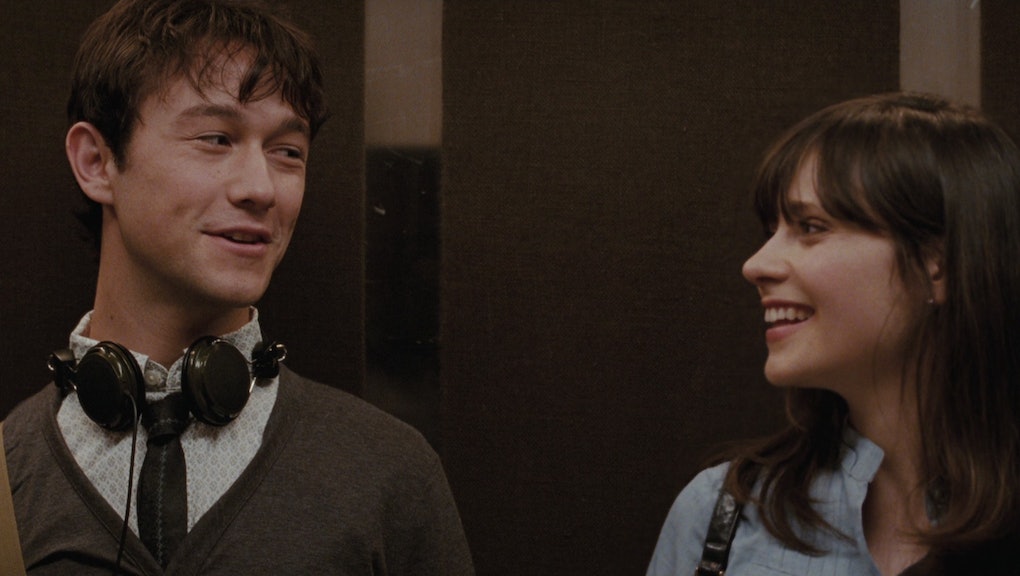 There's an Awesome Stage Between "Like" and "Love," and This Is What It's Called

Nine years ago, I was sitting in my college dorm room, thinking of a guy I liked and feeling what I guess some might call "smitten" or "enamored." But those words didn't do it justice. I was on the brink of dizzying, warm, smack-you-in-the-face love.

"Hey, you know how the stuff that comes out right before a guy ejaculates is called pre-cum?" I yelled over at my roommate. She nodded.

It's a stage of a relationship we don't have accurate language for, because it's often brief. You're hovering on the edge, trying to pin down how you really feel and guessing what might happen. It's too soon for those three small words and yet, if things stay as smoothly as they are, you feel you're headed for that much-heralded relationship benchmark.

Feeling it in our bodies: The liminality of knowing you're headed toward love but are not quite there yet is best illustrated by — what else — an exchange on Girls, between Shoshanna and her boyfriend of a few weeks, Scott. In the finale of season four, Shoshanna tells Scott that while their relationship is lovely, she has to move to Japan for work. Scott encourages her not to move because, as he says, "I'm going to be in love with you... soon."

That's pre-love for you: You know it's about to come, it feels really good, and you just aren't quite there yet.

In fact, being in pre-love works its magic on us at a physiological level. As Valerie Frankel wrote on Oprah, the feeling of being about to fall in love is marked by a curious set of symptoms including "involuntary preoccupation, mood swings, emotional sensitivity [and] enhanced sensual awareness."

Those markers of pre-love can manifest in constant Facebook refreshes, text strategizing and nights of tossing and turning, going over every little thing that person said. ("She said 'I don't want to stop seeing you' — did that mean stop going on dates? She wants to make a commitment? Just more Skyping?")

What makes your brain go funny on pre-love? "During this stage, what I call infatuation, you experience increases of norepinephrine and dopamine levels in the brain and of testosterone too, since lust is involved," Helen Fisher, author of Anatomy of Love, told Oprah. But it doesn't last too long: "When you move into the attachment stage, where you see an increase of vasopressin and oxytocin, the other hormones return to normal."

It's all about the (lack of) language: There aren't standardized phrases for the various feelings around love, and what we do have is imprecise: There's a crush, there's the vague stage of "liking" and then there's the limiting "love."

In fact, English only has one word for the term "love," compared to other languages, like Sanskrit, which has 96 words to cover the complex emotion, as relationship expert Margaret Paul pointed out in the Huffington Post.

Instead, University of Massachusetts Amherst psychology professor Susan K. Whitbourne told Mic, "Something 'clicks,' and you feel that you have a connection to the person that you may not even be able to put into words." Not having the words might make us write off the feeling — but not having the words doesn't make the feeling any less crucial in the evolution of a relationship.

The passion before commitment: Some might be hesitant to surrender to that "pre-love" stage because the stage after it can require more decision-making. "Sometimes it's the nicest part of a relationship: It's all promise," Lisa, 26, told Mic.*

Indeed, pre-love is essentially step one of more serious aspects to a loving relationship. In 1997, psychologist Robert Sternberg put forth the idea that love is composed of three parts: intimacy, passion and commitment. The closest to the pre-love stage is that of infatuation, which is marked by feelings, "high in passion but low in commitment and intimacy, which will come later," Whitbourne told Mic.

"It feels giddy," Kelsey, 26, said of being in pre-love. "Like the top of a rollercoaster, and therefore also terrifying, because love means the probability of getting my feelings hurt, exposing myself emotionally, and it also means commitment."

Finding yourself in states of pre-love again and again, if anything, is a reflection on how we date today, with so many partners and constant change. If, on average, we're not fully committing to someone for the long haul until our late 20s, we may find ourselves in the pre-love stage more often than in love itself. That's not a bad thing; in fact, as Kelsey and Lisa point out, it can be a great joy.

Especially if, after hovering in that pre-love state, that huge rush of pleasure does eventually arrive.

* Names have been changed to allow subject to speak freely on private matters.