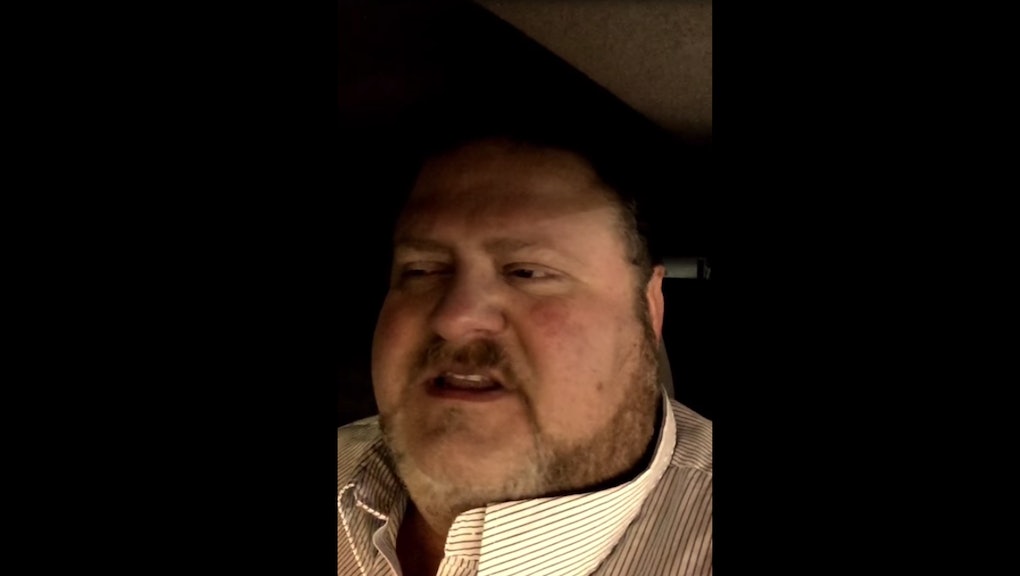 He's a redneck who loves America and hates white supremacy.

That's the proclamation New Orleans resident Dixon D. White makes in a video that has taken the Internet by storm. White takes white people to task for ignoring how racism makes life hell for people of color, with a camera phone propped up in his Ford F-150, as the Daily Dot reports.

As his video goes viral, the widespread fascination with White's videos reinforces a twisted reality about discussions of racial oppression: When white people say what people of color have said for years about racism, more people pay attention. And the novelty of a Southern, white male who self-identifies as a "redneck" relaying that message makes him the last person most would ever expect to offer harsh criticism about race in America.

Dixon White understands this dynamic. White confesses his own sordid history with racism in his videos, and said he disliked black people and used the n-word before personal experiences led him to realize why his beliefs, behaviors and surroundings oppressed others. "We live in a white supremacist culture that caters to white people," White says. And with that, he recognizes that part of living in a society that privileges white people means that their beliefs and values will take center stage above others.

"I think it's sad that it takes a white person to get this much attention, to get a movement going, when black people have been saying the same thing for over 400 years," White told the Root. "To me, it's a sad state of affairs when it comes to racism in our country. It really shows how white supremacy is really in the fabric of our country. It's white privilege as to why I'm getting the attention. That's the bottom line."

But White wants to use that privilege and the extra attention to help other white people directly confront racism. To that end, he issued a "Racial Healing Challenge," encouraging other white people to create videos where they engage in similarly frank discussions about the topic. Some online users have dubbed it the #DixonChallenge.

Of course, the discussion about dismantling racism looms bigger than any individual, regardless of their racial identity. White people should and must participate — but the how matters just as much as the why.

What centering white perspectives ultimately says. Although the evils of racism cut across lines of color, the reality remains: People of color endure its dehumanizing effects at every turn. Their own stories and experiences should be regarded as most insightful, because people of color have lived through it for generations. Unfortunately, that's just not what happens.

When people of color speak up about racism, they're often accused of applying so-called reverse racism against white people, manufacturing controversy through race-baiting or behaving in an oversensitive manner, or they're simply dismissed as irrational — all defense mechanisms, citing people of color as having a biased, therefore less valid, perspective. But when the same concerns are corroborated from the perspective of a white person, other white people will listen.

As Aura Bogado wrote in the Nation, this behavior dates back to white abolitionists' accounts of slavery. Wellesley professor Peggy McIntosh, who penned the influential essay about everyday white privileges, noted the centering of white perspectives as an indicator of said privilege. In the current environment, #CrimingWhileWhite bolstered what everyone already knew about white people avoiding brunt of racial profiling and police brutality. Instead, it reeked of humble bragging and came at the expense of diverting attention away from the already expressed struggles of black people.

Engaging responsibly. This isn't to say that white people can't talk about racism or process their thoughts. But when engaging the issue, whether it's through a video, a hashtag or over coffee with friends, the narratives of people of color must be regarded as important to white people who seek to break down racism.

As White told the Root, "In my videos, I'm talking to white people, not black or brown people, because black and brown people live this every day. I'm trying to start a movement where we can deal with racism.

"I want everybody to take their smartphones and simply talk about what's in their heart racially in regards to addressing white supremacy."