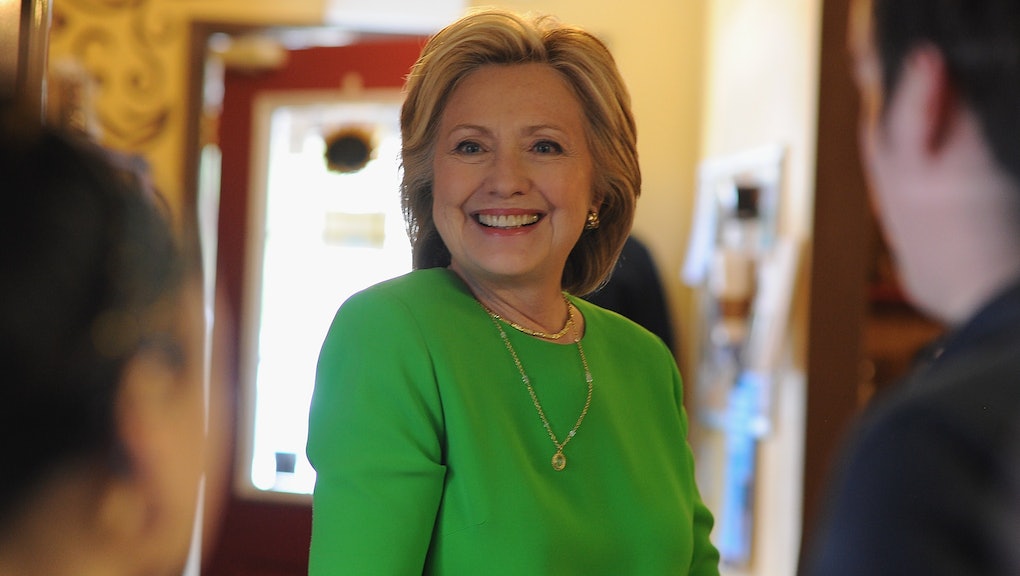 Hillary Clinton spent Tuesday afternoon chatting up potential supporters in Iowa, the first official stop on her second and final foray into the world of presidential politics. Though she only declared her candidacy on Sunday, Clinton has already come in for a barrage of familiar attacks, many of them as tired as the rhetoric aimed at her during husband Bill's first presidential campaign in 1992.

As a candidate, there is plenty in Clinton's resume for critics to fairly question. She has spent parts of three decades in the public eye and more than a dozen years as a public servant. Opponents say Clinton is part of a dynasty — which, by the strict definition, she is not — but even if she has clearly shared in former President Clinton's political success, that is hardly the measure of her considerable personal achievements.

Clinton is a singular figure in American political history. These are 11 of her most distinctly personal accomplishments:

1. She gave and delivered a kickass commencement speech at Wellesley College in 1969.

Not yet a Clinton — she didn't meet Bill until the next fall, at Yale Law School — Hillary Rodham delivered a remarkable address during commencement festivities for Wellesley's Class of 1969. Rodham was sharp, witty and forceful, displaying some of the chops she's carried onto much larger stages. She closed by reading a poem written by friends, its final lines offering an instructive glimpse into the pragmatism that has characterized her political career:

And you and I must be free

And with that, Hillary Rodham set off for New Haven, Connecticut.

Rodham arrived at Yale in the summer of 1969. She graduated with honors, and was one of only 27 female students in a class of 235 in 1973. She spent the next year doing postgrad work at the Yale Child Study Center, before heading back to Washington, D.C., where she had spent a summer on Capitol Hill working for Sen. Walter Mondale (D-Minn.), to join a select group of attorneys charged with deciding whether to impeach President Richard Nixon over the Watergate scandal.

3. She was the only woman on the Nixon impeachment investigation team.

The year before she married Bill Clinton, Rodham became the lone female counsel on the congressional team investigating Nixon's role in an attempted burglary at the Democratic National Committee's offices and the subsequent cover-up. Hers was a brief stint, and there's some debate about the terms of her departure from the team. Regardless, Nixon resigned that summer and the soon-to-be Mrs. Clinton made her fateful journey to join Bill in Arkansas.

4. She cofounded the Arkansas Advocates for Children and Families advocacy group.

Hillary and Bill were married on Oct. 11, 1975. By 1978, Bill was serving his first term as governor. Hillary, though, wasn't just hanging around while her new husband ascended the political ladder: she joined the Rose Law Firm in Little Rock, Arkansas, then helped create the Arkansas Advocates for Children and Families organization, which is still up and running today. Clinton helped author its original mission, which, according to the group's website, calls for it to serve as an "independent force to provide information and education to parents and citizens about our state's policies toward children and families."

5. She broke the mold for first ladies with her speech at the 1995 United Nations Women's Conference in China.

Clinton traveled to China in September 1995 for the fourth-ever U.N. Women's Conference.

"We are to find common ground," she told the conference at the beginning of her nearly 20-minute speech, "so that we may help to bring new dignity and respect to women and girls all over the world."

For Clinton, it was just the latest chapter in what was by then a long career advocating for just those things. But as the diplomatic face of the U.S., China was the site of her now-celebrated debut performance. It was only the beginning.

6. She won a Grammy for the audio edition of her book, It Takes a Village.

In January 1996, Simon and Schuster published her book, It Takes a Village. It quickly became a bestseller and, a year later, Clinton won a Grammy for the audio version.

"I didn't even know that Grammys were given to tone-deaf singers like me," she said, collecting her award, "but I'm very grateful for this."

7. She worked with Ted Kennedy to expand the Children's Health Insurance Program.

The late Sen. Ted Kennedy (D.-Mass) credited Clinton, then the first lady, with applying the necessary pressure to get her husband's White House to support the creation of the State Children's Health Insurance Program, or S-CHIP.

"The children's health program wouldn't be in existence today if we didn't have Hillary pushing for it from the other end of Pennsylvania Avenue," Kennedy told the Associated Press in 2007.

An aide to Kennedy, Nick Littlefield, told the New York Times in 2000 that Clinton had been "a one-woman army inside the White House to get this done."

8. She won the most votes of any female presidential candidate in history.

In narrowly losing out on the 2008 Democratic presidential nomination to Sen. Barack Obama, RealClearPolitics estimates that Clinton collected 18,046,007 votes, the most ever accrued by a female candidate for president.

As she suspended her campaign that spring, after months of pitched political battle with Obama, Clinton counted each one as a crack in "that highest, hardest glass ceiling."

"And the light is shining through like never before," she told her supporters, "filling us all with the hope and the sure knowledge that the path will be a little easier next time."

9. She set the stage for Obamacare by pushing health care reform in the '90s and during the 2008 campaign.

Though the 1993 plan often referred to as "Hillarycare" turned into a political mess for Bill Clinton's White House, it did set into motion a chain of events that led to the writing and passage of President Obama's Affordable Care Act. In an ironic twist, Senate Republicans responded to the Clintons' initial plan with one of their own, one that Politifact says looked "strikingly similar" to what we now call Obamacare.

Additionally, it was Clinton who, during her 2008 debates with Obama, insisted that an individual mandate would be necessary to fund a health care overhaul. Though Obama denied it then, it became an important and controversial part of his signature domestic policy achievement.

10. She became the most-traveled U.S. secretary of state ever.

As she prepared to leave office in January 2013, the Atlantic did the final calculations. During her four years as secretary of state, a post she accepted at Obama's request soon after he was elected to his first term, Clinton traveled a record total of 956,733 miles. That meant more than 2,000 hours in the air and on the road. In all, she visited a record 112 countries over four years as America's chief diplomat.

11. She set into motion the first American talks with Iran since the 1979 revolution.

Clinton also managed to do a few things during all that time on the move. Most notably, she dispatched a young aide named Jake Sullivan on a mission many Americans believed impossible — to begin what the Associated Press describes as "secret talks with Iran that led to the start of the international negotiations over the country's nuclear ambitions." The jury's still out even as those initial efforts have now yielded the framework for a potentially historic deal. But if the sides can come to a formal, multilateral agreement by the June 30 deadline, this might go down as Clinton's most remarkable achievement, whether she wins the presidency or not.