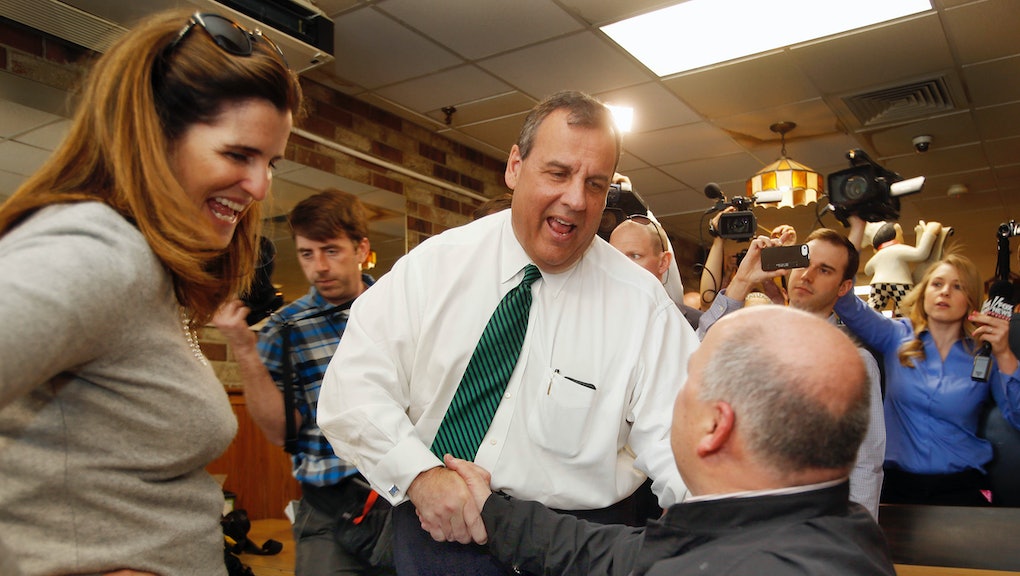 Christie, who has not yet made a decision on whether to run, was responding to a question from conservative talk radio host Hugh Hewitt, who asked, "If you're the president of the United States, are you going to enforce the federal drug laws in [Colorado and Washington]?

"Absolutely," Christie replied. "I will crack down and not permit it. Marijuana is a gateway drug. We have an enormous addiction problem in this country and we need to send very clear leadership from the White House on down through federal law enforcement."

A former federal prosecutor, Christie added, "Marijuana is an illegal drug under federal law and the states should not be permitted to sell it and profit from it."

You can listen to the exchange here:

Doubling down: Tuesday's comments fall in line with Christie's previous statements on marijuana policy. He has called laws allowing for medical use a "front for legalization" and, despite a 2009 law signed by his predecessor Gov. Jon Corzine (D) permitting medical pot sales in New Jersey, participation in the state program is lagging.

While campaigning for Republicans in New Hampshire last summer, Christie was asked by a GOP candidate for state office, "If you were president, how would you treat states that legalized marijuana?"

Christie has dismissed the potential benefits, like a bump in tax revenue, that have come to Colorado in the wake of legalization.

"For the people who are enamored with the idea with the income, the tax revenue from this, go to Colorado and see if you want to live there," Christie said on his radio show last April. "See if you want to live in a major city in Colorado where there's head shops popping up on every corner and people flying into your airport just to come and get high. To me, it's just not the quality of life we want to have here in the state of New Jersey and there's no tax revenue that's worth that."

Those comments drew the ire of a number of prominent Colorado officials, including Eric Brown, a top aide to Democratic Gov. John Hickenlooper.

"A lot of people think Colorado is a great place to live, work and play," Brown told the Huffington Post. "Plus, we have a pretty awesome quality of life. But don't just take our word for it," he said, before sharing a laundry list of statistics indicating that quality of life was better in Colorado than New Jersey.

Going against the grain: If he does run and is elected to the White House, Christie can expect a more welcoming response from legislators in Washington, D.C. House Republicans have avoided any suggestion of decriminalization or lifting the federal ban on medical sales and research, even when confronted by a member of their own caucus.

Only Sen. Rand Paul (R-Ky.), now a candidate for president, has shown real willingness to change the law, cosponsoring a bill with Democratic colleagues Sens. Kirsten Gillibrand and Cory Booker that would make it easier for doctors to prescribe pot for medicinal purposes, especially to war veterans, and lessen the legal consequences for individuals caught in possession of small amounts of the drug.

Four states and Washington, D.C., have legalized marijuana for recreational use. Eighteen more have decriminalized it, while 23 have in place allowances for doctor-prescribed medical use. Expect a series of new statewide voter initiatives to crop up ahead of the 2016 general election, dragging the marijuana question into the mainstream presidential debate.

Given where the polls are trending — a wide-ranging Pew survey released early Tuesday found 59% of Americans opposing federal intervention like Christie promised — it will be interesting to see if the governor hangs on to his increasingly hard line.