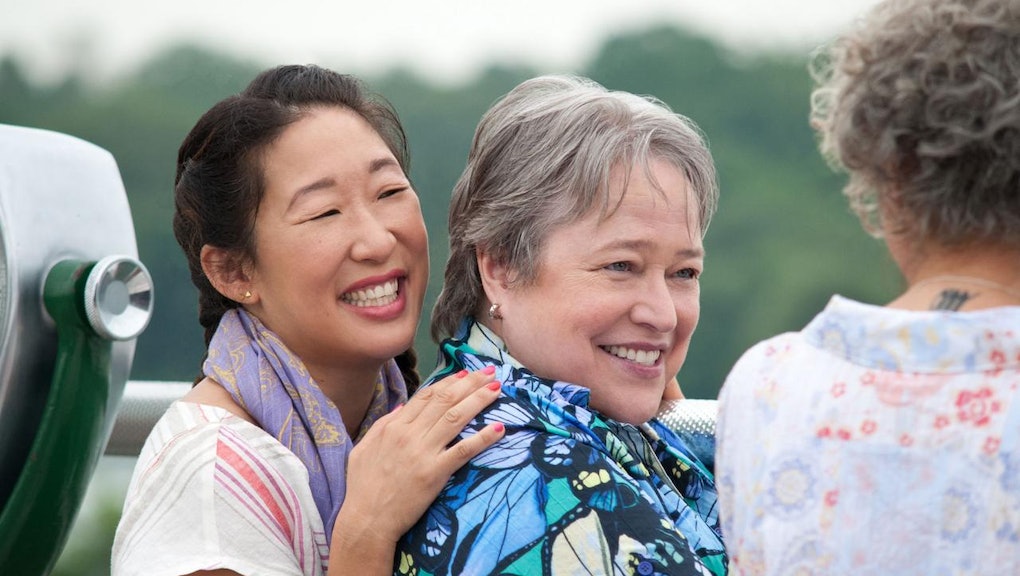 LGBT Representation in Film Still Has a Long, Long Way to Go After a Bad 2014

On Wednesday, GLAAD released its third annual Studio Responsibility Index report. The report breaks down film releases from the main seven film studios and calculates the percentage of major movies in 2014 that were LGBT-inclusive. Twenty of the 114 films released in the U.S. included a gay, lesbian or bisexual-identified character. That works out to 17.5%, which is low, but still an improvement over last year's 16.7%. Worse, the number only begins to suggest how much work there is to be done.

Most of the studios are merely doing adequate work. Only Warner Bros. earned a "good" rating this year, and all but one studio released fewer than four films featuring LGBT characters. Two, Sony Columbia and Disney, each included just one LGBT character and were given a failing grade. Worse even, those characters were Lady Gaga as herself (a bisexual woman) in Muppets Most Wanted and Eminem as a gay version of himself in The Interview.

This is how bad Sony's year in LGBT inclusivity was: Their most inclusive film was The Interview, a film that featured an extended joke about Seth Rogen putting something up his own ass.

Even worse, not one of the 20 LGBT-inclusive films actually featured the T of LGBT. "There were no characters GLAAD determined to be identifiably transgender among any films tracked this year," GLAAD wrote in its report. That is astonishing. Unsurprisingly, among the queer characters in film last year, those represented were overwhelmingly gay men.

More to the point, they were overwhelmingly white. Only 32% of LGBT characters were also people of color.

This must just be Hollywood's problem, you might think. Surely independent films are more inclusive. Unfortunately, they're actually even less so — at least the ones that get picked up by major independent studios.

For the first time in their report, GLAAD surveyed four major independent distributors' films. Among Focus Features, Fox Searchlight, Roadside Attractions and Sony Pictures Classics' 47 combined theatrical releases, only five featured an LGBT-identified character. That accounts for only 11% of the indie studios' output, beaten by the major studios by over 6%.

Sony's year in LGBT inclusivity was so bad that their most inclusive film was 'The Interview.'

Perhaps most alarmingly, the LGBT characters included in these films weren't even required for the film's plot. Like Gaga and Eminem, they amounted to nothing more than quick cameos in many cases. From the report's "Observations and Recommendations" section:

In some ways, however, the report is fitting. There's no more apt way to cap a year that overwhelmingly celebrated white, male narratives at the Oscars and the box office. The revelation that not only is film still dominated by white men, but by straight white men, is sadly and terribly unsurprising.