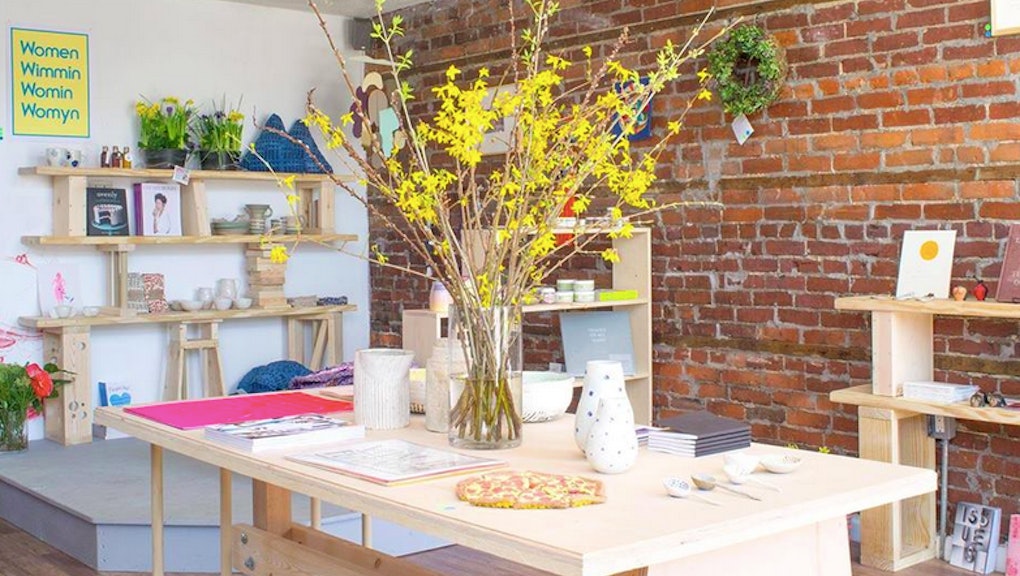 America has a serious wage gap problem. Men earn roughly 20% to 25% more than women for comparable jobs, on average. Now, however, one feminist shop owner has come up with a novel approach to bluntly demonstrate the problem and make sure everyone realizes how ridiculous it is.

Elana Schlenker, a 31-year-old graphic designer, opened 76<100 as a pop-up shop in Pittsburgh with the simple premise that female shoppers would only have to pay 76% of the retail price of items, an allusion to the fact that women in Pennsylvania are paid 76 cents on the dollars of what men earn. The store fittingly had its grand opening on April 1.

"This is my first advocacy project," Schlenker told Mic. "I had the idea for the store and I thought it was a fun way to address the issue." Schlenker said she got the idea for gender-based pricing from Valerie Solanas' 1967 radical feminist tract, SCUM Manifesto, which the author priced at $2 for men and $1 for women.

As for the items on sale, Schlenker said they came mostly from local female artists who supported the store's mission. So far, the community response had been mostly positive from all genders.

"I've been really pleased with all the different kinds of people who have come," she told Mic. "My very first customer brought her granddaughter in and wanted to talk about the issues with her."

The store, which is part of Schlenker's nonprofit organization, Less Than 100, is funded by grant money and some of her own personal donations, but she's not looking to keep anything. "All the money is going to the artists," Schlenker told Mic.

The store will only operate until the end of April before Schlenker plans to pack up and move to New Orleans. Once there, she will set up shop again for another month. The only difference there is that female customers would pay 66% of retail costs to reflect the even more dire wage gap in Louisiana.

Schlenker told Mic that one of the more surprising things she found was how people didn't always understand the wage gap, or worse still, didn't think it was a very big deal. The numbers, however, tell a different story. An analysis by the American Association of University Women found that over time, the gap cost the average woman at least $400,000 over the course of her professional career. The White House found the same.

While a Pew Research Center study did find the situation for young women was improving, showing that the gap had narrowed to just 7 cents, another study estimated women will not achieve financial parity until 2058. Efforts by the government, like the 2009 Lilly Ledbetter Fair Pay Act, or by private businesses, like Reddit CEO Ellen Pao's decision to ban salary negotiations (which studies show disproportionately hurt women), have all been laudable, but more must be done.

For Schlenker, that comes in the form of awareness. For America to successfully tackle the wage gap, Americans have to accept that it is a problem, whether it's 66% or 76% or 93%. The only solution is 1:1, equal pay for equal work.

"However you want to slice it," she told Mic, "it's still an issue."