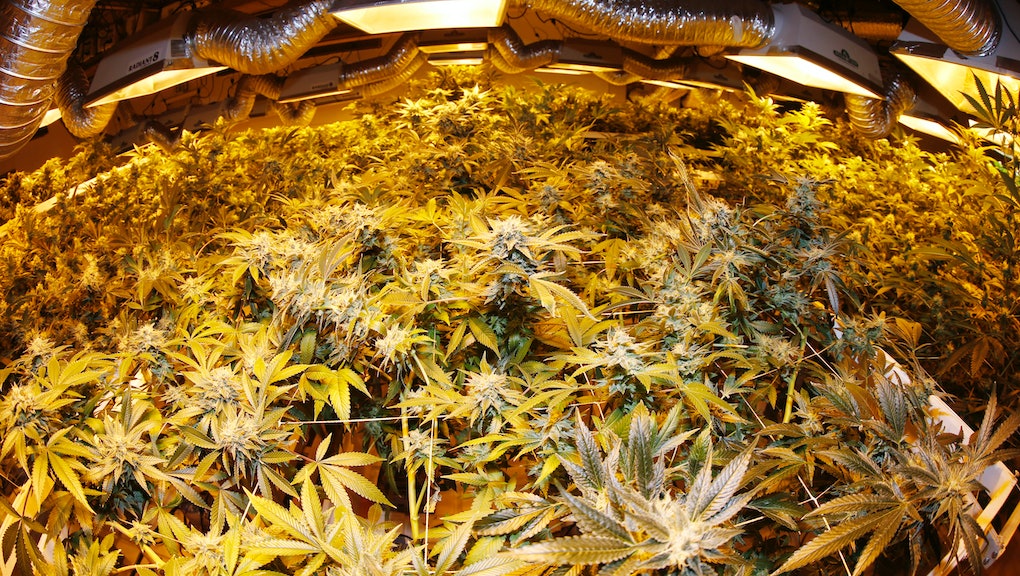 On July 1, Oregon will become the third state to allow the sale, possession, cultivation and private use of marijuana inside its borders. Like Colorado and Washington in 2012, and Alaska, where the the new law is being implemented in two phases, Oregon ended marijuana prohibition via a statewide ballot measure, which voters approved on Nov. 4, 2014.

"This victory is just one more example of how Oregon is a special place filled with true trail blazers," the state's pro-legalization campaign, Yes On 91, said in a triumphant statement after the final tally.

Advocates for the repeal of federal marijuana prohibition, which began with the signing of the Controlled Substances Act of 1970, are now mobilizing across dozens of states and Washington, D.C. (which also voted for legalization in 2014) working to chip away at the Nixon-era law through an unprecedented campaign of statewide ballot initiative drives.

But in pursuing state measures that run directly counter to federal prohibition, these activists — including Oregon's "true trail blazers" — have inherited a complicated legacy, summed up in a single historically loaded phrase: "States' rights."

"Marijuana advocates should be weary about how heavily they rely on a states' rights issue to advance their cause," John Hudak, editor of the Brookings Institution's FixGov blog, told Mic. "In a lot of other cases, the ideology driving their support for marijuana legalization would make them opposed to states' rights arguments."

"On marijuana legalization, a lot of the people who are advocating for the state's right to spit in the face of the federal government and do their own thing are also some of the same people who are opposed to states who do this on abortion, in banning same-sex marriage, and on issues around civil rights," Hudak said.

That contradiction can be dangerous. Laws do not exist in a vacuum. Challenges to California's Proposition 8, a 2008 referendum overruling a court order to allow same-sex marriage, were pitted as a standoff between the desires of a strong central government and a particular strain of federalist legal theory that coalesces around the concept of a states' right to reject them. Now, many marijuana reformers are employing the same tactics that opponents of gay marriage once used to deny same-sex couples the right to marry.

Side effects: Still, the vanguard of the legalization movement seem untroubled by the potential knock-on effects. Invoking or alluding to states' rights is primarily seen as a useful tool for crafting politically diverse coalitions. The term itself is mostly absent from their arguments, but the underlying principles run deep.

Speaking at this year's Conservative Public Action Conference in Maryland, former Florida Gov. Jeb Bush and Texas Sen. Ted Cruz, both conservative Republicans with eyes on the White House in 2016, said they would be comfortable leaving the marijuana question to states. The CPAC crowd met their declarations with applause, not because they were anxious to see pot laws relaxed, but because it gave them an insight into how the likely candidates regarded the role of the federal government.

In its July 2014 editorial series arguing for an end to marijuana prohibition, the New York Times — not a publication known for echoing GOP talking points — suggested the same.

"Consuming marijuana is not a fundamental right that should be imposed on the states by the federal government, in the manner of abortion rights, health insurance, or the freedom to marry a partner of either sex," editorial board member David Firestone wrote, neatly grouping together a messy assortment of legal and moral disputes. "It's a choice that states should be allowed to make based on their culture and their values and it's not surprising that the early adopters would be socially liberal states like Colorado and Washington, while others hang back to gauge the results."

But questions of "culture and values" often lead to dark and confounding answers.

In the name of ... what? The concept of states' rights as a partisan or regional cause precedes the drafting of the Constitution. Under the banner of "states' rights," the authors of the founding documents successfully negotiated to protect slavery in the new American South. Nearly two centuries later, during the Civil Rights era of the 1950s and '60s, segregationist governors like Alabama's George Wallace rallied his Dixieland allies with the same language.

Indeed, even as liberal voters occasionally take advantage of statewide referendums to loosen or repeal marijuana bans, and marriage equality advocates continue to carve a path through state courthouses, the "laboratories of democracy" have continued to conjure up all manner of sour brew.

Most recently, Indiana's governor signed a so-called "religious freedom" law giving private companies the right to refuse service to LGBT people on grounds doing so might violate the orders of their faith. The state backed down, enacting a "fix" that included protections for a number of classes, including the LGBT community, after a nationwide backlash and the threat of big business boycotts.

Indiana fits in with a growing number of states prepared to invoke their 10th Amendment rights in service of some unsavory bit of legislation. More than 30 states now have laws on the books requiring poll workers to ask voters for assorted forms of identification. Protections promised to women in 1973's Roe v. Wade decision, in which the Supreme Court made abortion a fundamental right, have been routinely undercut and undermined by states, like Texas, that pass legislation to limit access to legal, working clinics.

"If the federal government starting giving in to states' rights on social policy, there would be a lot of marijuana legalization advocates who would be happy about marijuana but very unhappy in a host of other policy areas," Hudak said.

The means matter: Speaking to Mic in March, top Capitol Hill pot lobbyist Dan Riffle, the director of federal policies for the pro-legalization Marijuana Policy Project, was blunt in explaining how he sells himself to an ideologically diverse set of lawmakers.

"If I'm talking to a conservative Republican," he said, "I'll talk about states rights,' federalism and the 10th Amendment," all of which appeal to proponents of decentralized government. "It's all about knowing your audience," he said.

And while it might seem cynical, Riffle's pitch is right in line with the tone of interests he is paid to represent. The upside, for all parties, is intoxicating — there is so much to be gained by further whittling away at the infrastructure of federal marijuana prohibition, it seems almost priggish to question the means. What is some legal pretzel logic against the prospect of freeing a generation of young men and women, disproportionately taken from communities of color or poverty, from incarceration and a degree of police harassment?

These are important questions. The time has come to shed the blinkers and consider what the answers really mean.