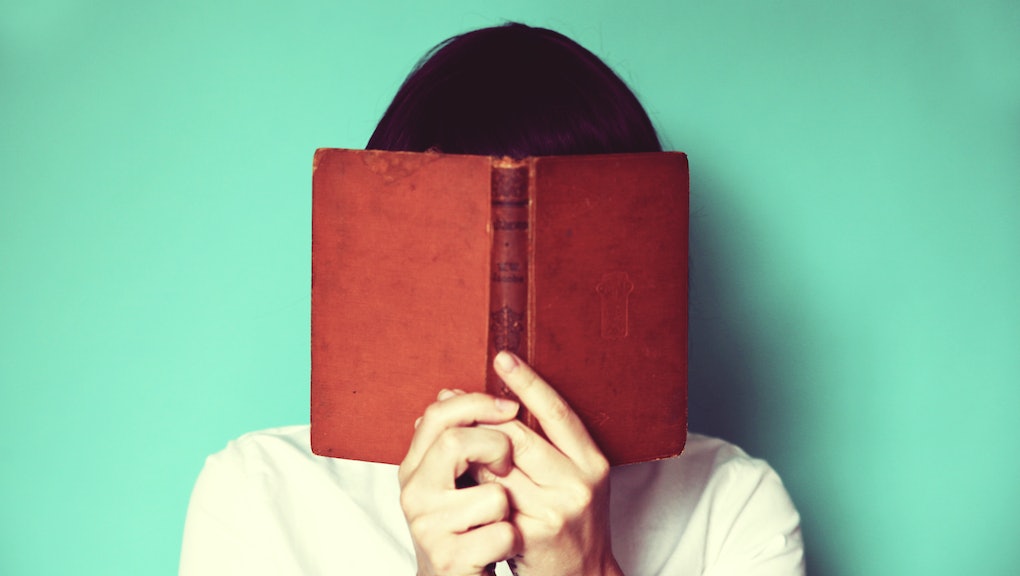 Think about the number of words you come across each day. Consider every source, whether it's news stories, text messages, emails, road signs, ingredient labels, tweets, TV commercials or subtitles, and try to tally up how many words each medium spits back to you.

What did the total come to? Hundreds? A few thousand? Tens of thousands?

The average American consumes about 100,500 words on an average day. That's more than the number of words in Charlie and the Chocolate Factory and The Scarlet Letter combined, and it's a tenth of the total number of words in the English language.

The figure, established in 2009 by researchers at the Global Information Industry Center, an arm of the University of California, San Diego, looked at more than 20 sources for words, including newspapers, books, TV and phones. According to the research, Americans consumed a mind-boggling 1.3 trillion hours of information in 2008, or about 12 hours per day.

Tech time: While roughly 55% of words consumed came from radio and TV, the study also made clear the Internet is slowly creeping up on us. The 2015 Internet stats likely even higher; Web use has increased considerably since the study examined 2008 data.

"Thanks to computers, a full third of words and more than half of bytes are now received interactively," the executive summary notes. "Reading, which was in decline due to the growth of television, tripled from 1980 to 2008, because it is the overwhelmingly preferred way to receive words on the Internet.

"Reading as a percentage of our information consumption has increased in the last 50 years."

Looking versus reading: This uptick might be a good thing at first blush, but it's more textured than it appears. Reading goes deeper than pure consumption — it's also about processing, analyzing and remembering. Reading leaves a mark. It makes a dent upon our consciousness we come back to time and time again.

Consumption, on the other hand, is reading without registering. If reading is like slowly savoring a five-star, three-course meal, consuming information is like snacking on a can of Pringles: Delicious, yet vaguely unsatisfying.

As Nikkitha Bakshani writes for the Morning News, "We read, especially on the Internet, merely to acquire information. Information that stands no chance of becoming knowledge unless it 'sticks.'"

If we're drinking in 100,500 words per day, it's difficult to imagine it's anything other than cheap consumption. The question, then, becomes whether this intake is helpful or harmful.

First, the good: The massive spread of information is objectively a good thing. We all but have the keys to the universe in our pockets — we can look up virtually any piece of information, all while bridging continents, millennia, languages and areas of interest.

It's also a remarkably equalizing system of distribution. Information is no longer confined to a tiny portion of the population, and it's accessible to a wide (though not complete) swath of the globe. If you have access to the Internet, and about 40% of the world does, you can log on, read a news story or report, and know more than you did the day before.

The old adage of "knowledge is power" becomes particularly appealing with the rise of technology — the more people that share this knowledge, the more evenly dispersed the power that it hold becomes.

On the other hand, this information is a mile wide and an inch deep. We may have access to a boatload of information, but it doesn't necessarily equate to value. The more space we carve out in our brains for quantity, the less we can afford to save for quality.

As Nicholas Carr argued in a 2008 Atlantic story:

"...what the Net seems to be doing is chipping away my capacity for concentration and contemplation. My mind now expects to take in information the way the Net distributes it: in a swiftly moving stream of particles. Once I was a scuba diver in the sea of words. Now I zip along the surface like a guy on a Jet Ski.

In the end, it's all about balance. There are dangers to both sides of the debate. Swing too far over to Carr's side and you risk sounding like a crazed technophobe hellbent on decrying the dangers of the Web. On the other hand, if you rely too heavily on the virtues of democratized knowledge, you may forget widespread access is rarely fair or efficient.

Now that the genie's out of the bottle, it's difficult to foresee a future in which mass consumption of information isn't the norm. But as long as we're mindful of its pros and cons — and maybe remember to pick up a novel every once in a while — the world won't come crashing down around us.