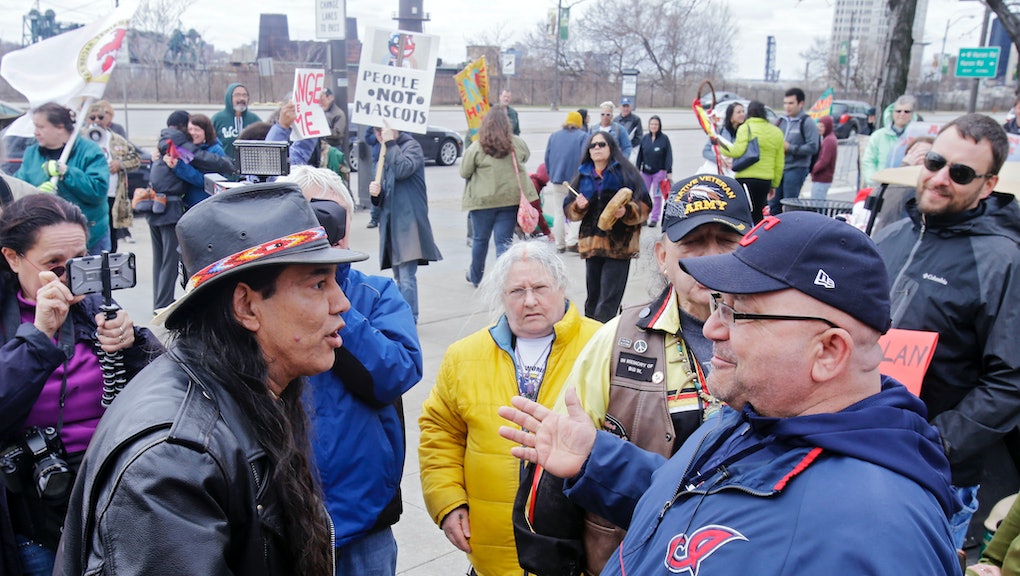 Baseball Is Back, and So Is a Really Big Problem for Native Americans

Baseball is back, and so is a hefty dose of good old-fashioned American racism.

At Progressive Field in Cleveland, opening day for the Cleveland Indians saw an 8-4 loss to Detroit and a boisterous protest staged by Native American activists and allies against the franchise's continued use of Chief Wahoo — the troubling piece of "red-face" minstrelsy that's served as the team mascot since 1951.

Indian Country Today Media Network reported that 150 activists, advocates and even a City Council member showed up to demonstrate April 10. "We are people, not your mascot!" some chanted. "Change the logo, change the name!"

The response from Cleveland fans was not pretty. ICTMN wrote:

Intoxicated fans mocked protestors [sic] at entrances to the field, making war whoops, screaming obscenities, and admonishing them to "get a job," or "go back to the reservation." After hours of drinking as game time approached many fans appeared as red faced and befuddled as the Chief Wahoo logo that adorned their clothing. A local radio station that was broadcasting in front of the stadium's main entrance loudly blared fake powwow drum music.

Your fellow Americans, ladies and gentlemen.

The team was "cognizant and sensitive to both sides of the conversation," the franchise's senior director of communications, Curtis Danburg, said in a statement. However, the team will "continue to have the Wahoo logo represented on [their] uniforms and home cap during the 2015 season" as they "[researched their] fan base to better understand their perception and stance on the logo."

That stance seems pretty clear by now. If there's one thing we've learned from the past 64 years, it's that most Cleveland fans seem completely fine with a piece of racist propaganda representing their team. That doesn't make it right.

The detrimental effect of treating Native Americans like mascots isn't just a matter of hurt feelings — its psychological toll can be devastating. Native youth already face among the highest rates of depression, substance abuse and suicide in the nation, the direct result of a history of state-sanctioned violence, endemic poverty and systemic racism. But a 2014 report from the Center for American Progress adds another dimension: The prevalence of Native mascots at schools and sports franchises promotes "lower self-esteem and mental health" among indigenous youth, and fuels "cultural biases and prejudices" among children of all backgrounds.

Cleveland's baseball team is hardly the only offender. The Atlanta Braves, Washington Redskins and Chicago Blackhawks are all professional sports franchises guilty of commodifying Native iconography for their own gain. But Cleveland fans aren't completely silent on the issue: The "de-chiefing" movement, in which fans remove the Chief Wahoo logo from their team apparel in protest, is a powerful example of how fans can show solidarity with Native protesters.

Yet little of this matters if the dissent falls on deaf ears. It's time for franchise executives to take a proactive stance on the subject and do the right thing. Native people have the same right to shield their image from defamation, ridicule and reduction to multibillion-dollar stereotypes as everyone else. In the meantime, so begins yet another season of the same tired excuses.