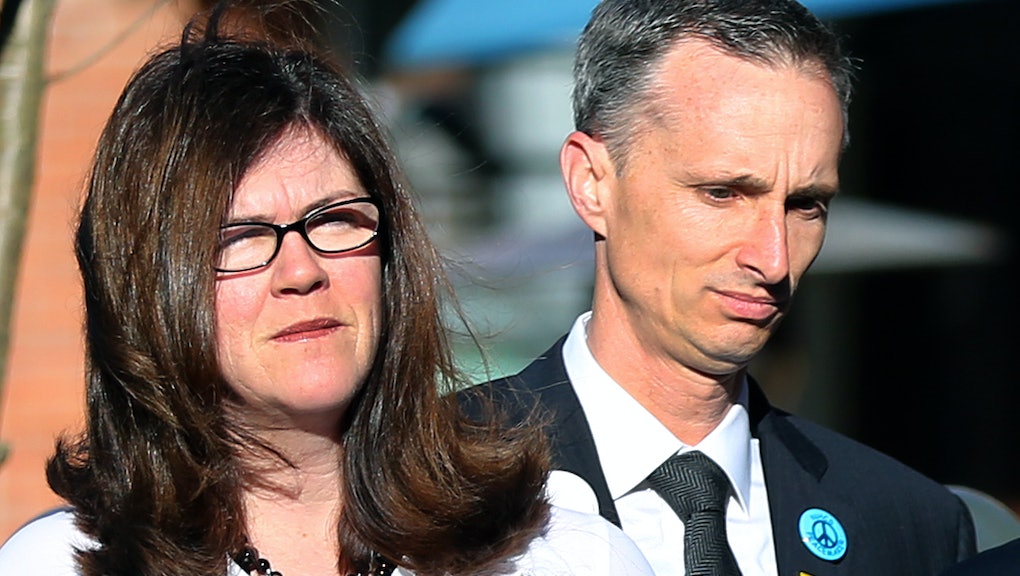 Dzhokhar Tsarnaev, found guilty April 8 of all 30 counts for his role in the 2013 Boston marathon bombing that killed three and wounded hundreds, was sentenced to death by a federal jury in Boston on Friday. The ruling comes as a blow to many who had argued that Tsarnaev's life should be spared and that he should instead be sentenced to life in prison without parole.

One of the most public and surprising voices in that chorus had been from members of victims families. Bill and Denise Richard laid out their case in a powerful letter last April to the Boston Globe. The Richards' 8-year-old son Martin was killed in the attack and their daughter Jane was critically injured and lost a leg.

The jury's decision all but ensures a years-long appeals process from Tsarnaev, which the Richard's wrote was exactly the outcome they wished to avoid.

"We hope our two remaining children do not have to grow up with the lingering, painful reminder of what the defendant took from them, which years of appeals would undoubtedly bring."

According to the Richards family, America would only heal from the event after stories about its perpetrator fade from the headlines, which is now not likely to happen.

The past two years have been the most trying of our lives. Our family has grieved, buried our young son, battled injuries, and endured numerous surgeries — all while trying to rebuild lives that will never be the same. We sat in the courtroom, day after day, bearing witness to overwhelming evidence that included graphic video and photographs, replicated bombs, and even the clothes our son wore his last day alive. We are eternally grateful for the courage and life-saving measures of first responders, Boston Police, the Boston Fire Department, and Good Samaritans on April 15, 2013. We also thank the FBI and other law enforcement agencies, the Department of Justice, and the Massachusetts U.S. Attorney's Office for leaving no stone unturned during the investigation and trial.

But now that the tireless and committed prosecution team has ensured that justice will be served, we urge the Department of Justice to bring the case to a close. We are in favor of and would support the Department of Justice in taking the death penalty off the table in exchange for the defendant spending the rest of his life in prison without any possibility of release and waiving all of his rights to appeal.

We understand all too well the heinousness and brutality of the crimes committed. We were there. We lived it. The defendant murdered our 8-year-old son, maimed our 7-year-old daughter, and stole part of our soul. We know that the government has its reasons for seeking the death penalty, but the continued pursuit of that punishment could bring years of appeals and prolong reliving the most painful day of our lives. We hope our two remaining children do not have to grow up with the lingering, painful reminder of what the defendant took from them, which years of appeals would undoubtedly bring.

For us, the story of Marathon Monday 2013 should not be defined by the actions or beliefs of the defendant, but by the resiliency of the human spirit and the rallying cries of this great city. We can never replace what was taken from us, but we can continue to get up every morning and fight another day. As long as the defendant is in the spotlight, we have no choice but to live a story told on his terms, not ours. The minute the defendant fades from our newspapers and TV screens is the minute we begin the process of rebuilding our lives and our family.

This is a deeply personal issue and we can speak only for ourselves. However, it is clear that peace of mind was taken not just from us, but from all Americans. We honor those who were lost and wish continued strength for all those who were injured. We believe that now is the time to turn the page, end the anguish, and look toward a better future — for us, for Boston, and for the country.

Tsarnaev had been represented by celebrated defense attorney Judy Clarke, who previously defended such infamous clients as the Unabomber, Jared Lee Loughner, the man who critically injured Congresswoman Gabrielle Giffords and killed six other people and 9/11 conspirator Zacarias Moussaoui. The Tsarnaev verdict promises to also be a major blow to her vaunted legacy.

Massachusetts outlawed capital punishment in 1984 and the commonwealth has not executed someone since 1947. Tsarnaev faces the death penalty because he was tried on federal charges.

The Richard's letter raises a number of points that are both important and powerful. From a personal standpoint, it's understandable the family wants to close this chapter in their lives and move on. Though the death penalty seems permanent, as the letter notes, legal tanglings could drag the case on for years in appellate courts, constantly forcing the family and many other survivors and their families to relive the crime.

The jury's verdict makes it likely that sooner or later Tsarnaev will be executed, however, the does not make the death penalty a permanent solution, while sending Tsarnaev to jail for life without a chance for appeal would have been.