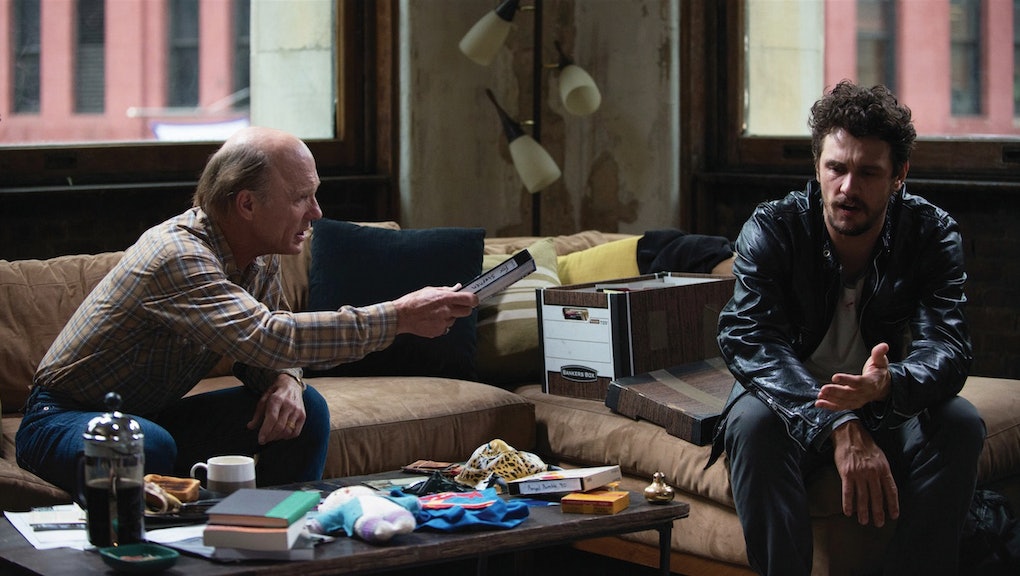 The truth is lying somewhere in the midst of Pamela Romanowsky's directorial debut, The Adderall Diaries. Unfortunately, none of the film's characters knows what that truth really is.

Adapted from Stephen Elliott's memoir of the same name, The Adderall Diaries charts Elliott's (James Franco) quick, painful self-destruction. The author of a best-selling memoir is accused of fabulism when his supposedly dead father (Ed Harris) appears at a reading and calls his claims lies. Elliott is insistent that he didn't lie — about anything except his father being dead — and sets out to prove his memories are true. Unfortunately, his memory is as selective as his father's, and neither of them knows the whole story.

The Adderall Diaries, currently screening at the Tribeca Film Festival, is about a lot of things. It's about a father-son relationship, drug addiction and how the people in our lives enable us. It's even a crime thriller at times. But more than anything else, it's about memory: how selective it is, and how frustrating not seeing the whole picture can be.

When she was in college, Romanowsky studied behavioral psychology, with an interest in memory specifically. "I've always been fascinated by memory ... because it's still largely unknown to us," she told Mic after a Tribeca screening of her film. "We don't totally understand how it functions, but it's really fundamental to our understanding of ourselves. Who we are depends so much on what's happened to us."

The director found her way to The Adderall Diaries in an unexpected fashion — stumbling across a recommended read in a Brooklyn bookstore. The book stuck with her, particularly for what she defined as its core hook: "We understand the world by how we retrieve memories, re-order information into stories to justify how we feel."

Editing is an insistent theme in the film, and not just because Elliott is a writer. He's reframed his own memories, fitting the characters and actions from his past into new patterns that better fit who he thinks he is. The film's greatest conflict comes from other characters, particularly his father, challenging his recollections. Yet Elliott doesn't accept their memories, disregarding them as unreliable or chalking them up to some bias (i.e. his father hates him).

"Those very foundational memories, the things we recall over and over again, tend to be the most edited," Romanowsky said.

Memory is identity: We edit our memories to forge who we are. It's a deep idea — and one that allows for exploration of dueling unreliable narrators. Sure, Elliott is lying to himself, but so is his father. Just as it's hard to admit to being a troubled kid, so is it difficult to come to terms with being a bad father.

"No one has access to the objective truth," Romanowsky told Mic. "The story of these two people probably lies somewhere in the middle of the way each of them would tell the story."

These are heady ideas, and for the most part, The Adderall Diaries is more focused on the graphic action of Elliott's life. Yet for all the dark scenes of the memoirist snorting drugs (including, yes, Adderall) and abusing himself, few live beyond the screen. It's the memories that linger instead.